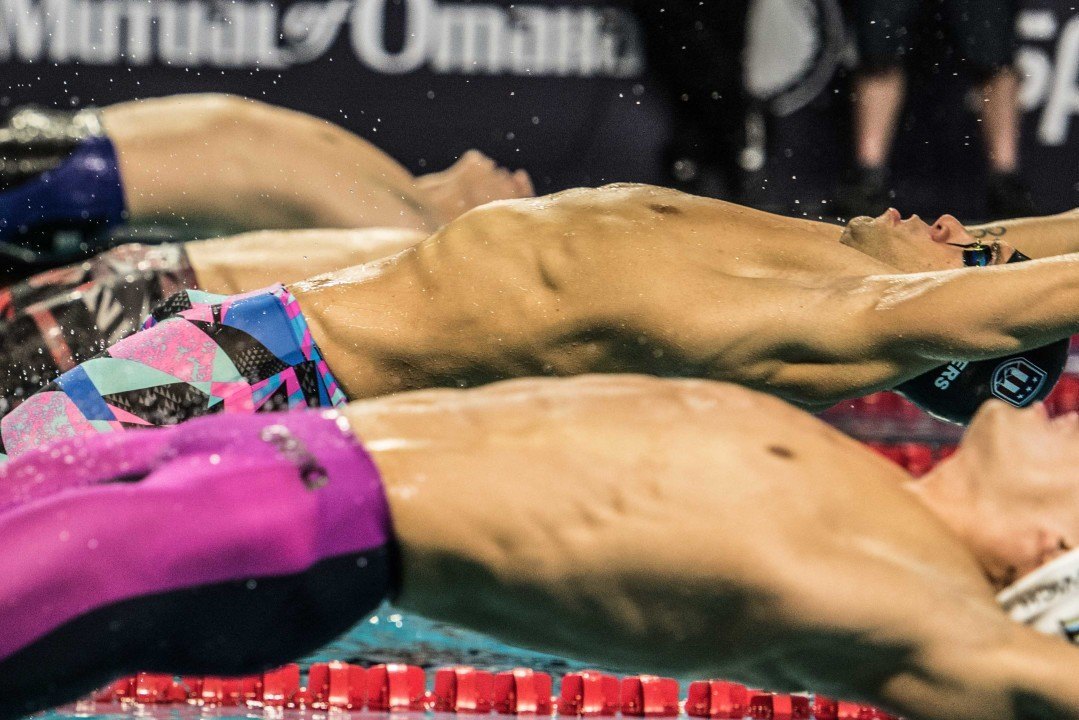 The 2017 Arena Pro Swim Series gets its late start next week, with annual tour kicking off from Austin, Texas on Friday, January 13. But in 2017, there's a new addition to the points hunt: the series will conclude with U.S. Summer Nationals, which will be worth double points. Archive photo via Tim Binning/TheSwimPictures.com

The 2017 Arena Pro Swim Series gets its late start next week, with annual tour kicking off from Austin, Texas on Friday, January 13. But in 2017, there’s a new addition to the points hunt: the series will conclude with U.S. Summer Nationals, which will be worth double points.

This year, the series dropped its traditional season-opening stop in Minneapolis. That meet was always a bit of an outlier, taking place in short course yards and preceding the other tour stops by two months. The 2017 series will now be conducted all in the Olympic-distance long course meters and will run from January through early July.

USA Swimming has experimented some with the conclusion of its Pro Swim Series in the past, last year splitting the series finale between two simultaneous meets in Indianapolis and Santa Clara. This year, Indianapolis has taken over the March stop that used to come in Orlando, and Santa Clara has the last regular stop on the tour in early June. But the Arena Pro Swim Series will now end with a bigger exclamation point, with the Phillips 66 Nationals counting not only for tour points but for double points – meaning a national championship win is worth two individual wins earlier in the tour.

U.S. Nationals will also take place in Indianapolis, meaning the IUPUI pool will host two of the six stops on the tour in all.

The series will open next Friday, Saturday and Sunday in Austin, Texas. USA Swimming has already revealed that 2016 Olympians Ryan Held, Josh Prenot, Hali Flickinger, Jacob Pebley and Amanda Weir will be competing, along with a number of other big names. One that will bring a smile to many swim fans faces is Matt Grevers, the 2012 Olympic champ who heartbreakingly missed the Olympic team for Rio. USA Swimming says the 31-year-old will compete in Austin.

Here’s a quick refresher on how the Arena Pro Swim Series works:

I heard Grevers wanted the 100 back WR. Now, it’s Murphy’s post Rio, but I don’t think that its out of the question. Those two could take it down to 51 low I’d bet.

The prize money is weak.

Grevers heartbreaking loss was the result of Plummer’s great feel-good story. I call it even. Two good guys.

What does this mean for the international swimmers that take part in the tour?

top US swimmers who are interested in doing the tour may have an advantage. Otherwise, top swimmers may help to dilute the point distribution at US National and high-point international swimmers may not end up losing too much.
I say top swimmers since US Summer National is also double as the WC trial meet (top 2 matters) and double points only affect top-3 swimmers. If a top US swimmer is already in the hunt of high-point award, his/her wins will gain a lot more points. But if said top US swimmer is not in the hunt/not swam in the tour in previous races, his/her taking the double points only help the leader (international or not) after the Santa Clara stop.

I thought that Grevers had retired.

Guess he had second thoughts

I think I remember that he did not explicitly use the word “retire” but strongly implied that Trials was his last meet after he missed the team in the 100 back. If Plummer retired, then there’s a path for him to make Worlds (though Pebley might have something to say about that). No matter the case, good for him if he wants to keep competing!