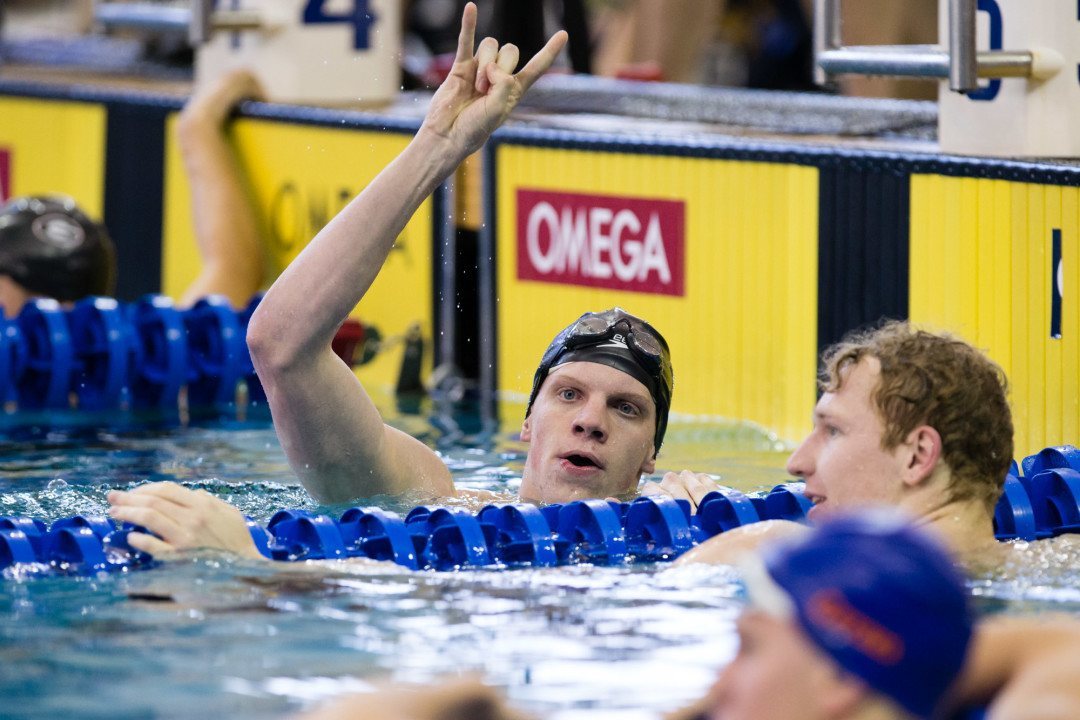 The Texas Longhorns will be hosting their annual midseason Texas Invite this week, with the action starting on Wednesday, November 30th and ending on Saturday, December 3rd. Wednesday night’s session will kick off at 6 p.m., with only the 800 free relays to be contested that evening. On Thursday and Friday, prelims will begin at 11 a.m. EST and finals will begin at 7:00 p.m. EST. Saturday’s prelims begin at 10:00 a.m. EST and finals begin at 4 p.m. EST.

This week’s competition will include several head-to-head battles between Olympic medalists and NCAA Champions. Read on for some of the notable races to look out for.

CLASH OF CHAMPIONS IN MEN’S FREESTYLES

Among the notable races to watch is the men’s 200 yard free, which will feature U.S. Olympic gold medalists Clark Smith and Townley Haas. Both have been NCAA Champions for Texas, with Haas owning the American Record in the 200 free as well. Also in the mix will be Stanford freshmen Grant Shoults, who broke the National High School Record in the 200 free and 500 free last season, and True Sweetser. USC-based Ous Mellouli, a Tunisian Olympic champion who trains with the Trojans as a postgrad, will also be throwing his hat in the ring.

The 200 free won’t be their only showdown of the weekend, as all 5 swimmers are entered in the 500 free. Smith, Mellouli, Sweetser, and Shoults are all slated to swim the mile as well.

WILL LICON ENTERED IN 200 IM

NCAA Champion and American Record holder Will Licon, a Texas senior, has been absent from his typical events up to this point due to a groin injury that has kept him from swimming breaststroke. While he isn’t entered in the 400 IM or the breaststroke events, he will be competing in the 200 IM. The rest of his schedule includes the 100 fly, 200 free, and 200 back.

In the 200 IM, an event in which he’s the defending NCAA champ, Licon will be up against Stanford’s Abrahm DeVine, an Olympic Trials finalist and All-American in the IMs. The Longhorns’ Jonathan Roberts is a title threat in this event, as is Stanford’s Curtis Ogren. In addition to the freestyles, USC postgrad Ous Mellouli will be in the hunt here as well.

Texas senior Jack Conger, another 800 free relay Olympic gold medalist, will not be in the 200 free individually, as he’s opted for the 100 fly/100 back double on that day instead. While he won’t be squaring off with teammate Joseph Schooling in the 200 fly this time around, he will be racing him in the 100 fly. While Schooling is currently a 4-time NCAA butterfly champ, Conger has given him a run for his money in past races.

Conger will also be swimmingt he 200 fly at this meet, an event in which he holds the American Record. Schooling, on the other hand, has chosen to swim the 100 free on the final day instead, which is identical to the schedule change we saw him make in Rio this summer. In that race, he’ll be up against the likes of fellow Longhorns Townley Haas and Brett Ringgold, Pac-12 sprint champion Sam Perry (Stanford), and former Bolles teammate Santo Condorelli (USC) , who narrowly missed the podium of the 100 free in Rio this summer.

On the women’s side, one of the big showdowns will be between USC freshman Becca Mann, who has  represented the U.S. internationally in the distance races, and Wisconsin’s Cierra Runge, a former 500 free NCAA Record holder, who is competing in her first year with the Badgers since she transferred from Cal. Slovenian Olympian Tjasa Oder, an NCAA All-American in the mile, has now returned to Arizona after taking an Olympic redshirt last season, so she could be challenging for the win as well.

While she isn’t entered in the mile, Pac-12 Champion Chelsea Chenault, a senior for the Trojans, will be a threat in the 500 free. Likewise, Texas’ Big 12 champion Joanna Evans will be making a run at the distance events in front of the home crowd, and has looked very strong already this season.

The women’s backstroke races at this meet are packed with talent. USC is looking very good here, with 4 women seeded in the top 8 of the 100 back. That group includes sprint ace Anika Apostalon and backstroke standouts Hannah Weiss and Hanni Leach. Making her NCAA invite debut here for the Trojans will be freshman Louise Hansson, who has already been 52.3 in her first-ever yards season.

UCLA has the top seed in Linnea Mack, and her teammate Madison White will be in the mix as well. Representing the home team will be Claire Adams, a former World Junior Record holder in the 100 back, and Tasija Karosas, an NCAA All-American. The Arizona Wildcats will also bring a powerhouse backstroke duo with Olympic Trials swmifinalists Annie Ochitwa and Taylor Garcia.

Depending on the level of rest, I could see Jospeh going 41 high or 42 low. The man is an animal

Or the breaststroke events. Does anyone know how to read or do they just rush to put down whatever pops into their heads without actually reading the story.

Remember USADA only test Vissering in the morning when his levels wil not hit the overtly positive range .

Haas and Schooling both in the 100 free over the 1650 and 200 fly. It’ll be interesting to see if they both end up swimming it at NCAA’s too. That would potentially have some really interesting implications for the Longhorns’ 400 free relay.

Schooling is not competing.

He’s still on the psych sheets for 50/100Free and 100Fly. Do you have any proof that he isn’t competing?

yah i asked him

Townley Haas, 200 free world champion next year?
After what he showed in the relay in Rio, no doubt he can do it. Of course an individual race is different but if he swims the individual race in the same way and with the same mindset he did it in the relay (swim your own race without looking at the other lanes and go out fast) then no reason he can’t win the gold. He has what that event requires. A perfect mix of speed and endurance. Happy to see he focuses more on the 100 free than the 1650 free. He needs to continue to improve his speed base. If the mental follows then anything is possible for… Read more »

I strongly believe that too about Haas . When we look at what Murphy did for the 100 and 200 back , than Haas has all the talent & training to get there as well .

except not at all, this meet is stacked

I was thinking the same thing.

Didn’t he graduate? I don’t think he swam last year either.

C Black did swim last year, and swam at the Pac12 Swim Championships. His 100 fly time even made the NCAA meet. But, haven’t seen him since. He is listed on the ’16-’17 Stanford roster, so perhaps he’ll have some results soon. Does anyone at Swimswam have any news? Morgan P, do you have any insight?

the live results are for the NC State and Texas Dual meet, not the Texas Invitational. I’m not sure if that is a mistake or not!

Hi Ethan. The link will probably show results from the previous meet until the invite starts tonight. Should be working when the meet begins