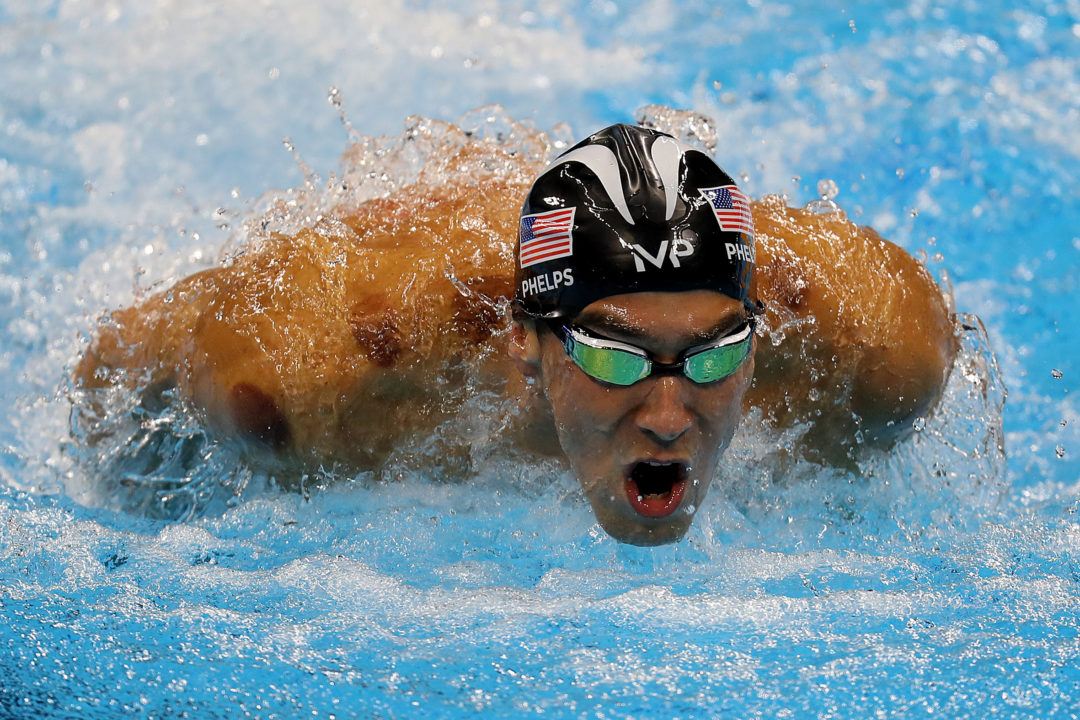 In the men's race, it's the last farewell to Phelps who will be fighting alongside his American teammates to take down the British in an event they have never lost at the Olympic Games Current photo via Satiro Sodre/SS Press

With four gold medals on the line the final night of swimming at the 2016 Rio Olympic Games has finally arrived and with it brings the last race Michael Phelps will swim. His last swim won’t take place until the last event of the night, and there’s plenty of action before that performance.

The women’s 50m freestyle will be the first event on the docket giving Australian Cate Campbell the chance to redeem herself from missing the podium in the 100 earlier in the meet. Pernille Blume of Denmark has been demonstrating some quick speed and could be the one to take down Campbell.

Gregorio Paltrinieri of Italy could win their first swimming gold of these games. He’s the heavy favorite after dropping a 14:44.51 here in Rio and a 14:34 earlier this season. Connor Jaeger of the United States, Mack Horton of Australia, and Ryan Cochrane of Canada will all be trying to fight to get on the podium.

After the completion of the individual events both the women’s and men’s 4x100m medley relays will take place. The women will be racing first where the Americans are heavy favorited. In the men’s race, it’s the last farewell to Phelps who will be fighting alongside his American teammates to take down the British in an event they have never lost at the Olympic Games

Pernille Blume of Denmark held on to her top seeds from both the prelims and semifinals in order to claim her first Olympic gold medal, closing fast to touch in at a time of

Defending Olympic champion Ranomi Kromowidjojo of the Netherlands was right in the mix at the touch but wasn’t able to get her hand on the wall in a podium position. She faded to sixth overall in 24.19 just 0.08 seconds off the podium.

Picking up the silver behind Blume as 100m freestyle co-champion Simone Manuel of the United States. She flew in to just miss gold by two one-hundredths of a second, falling short in a time of 24.09.

Aliaksandra Herasimenia of Belarus managed to squeeze in for the bronze in 24.11.

Cate Campbell of Australia was fifth, her sister Bronte was seventh. The top six swimmers were all extremely close to each other, only separated by 0.12 seconds.

Gregorio Paltrinieri of Italy met all expectations in tonight’s 1500m freestyle final becoming Italy’s first Olympic gold medallist in the event in the history of swimming. Paltrinieri was in control for the entire race, toying with the world record pace before falling off towards the end.

Third behind Jaeger was Gabriele Detti of Italy with an amazing back-half to push right into the race. No Italian had ever medalled in this event previously, and now two will stand on the podium. Detti clocked in at 14:40.86 to beat American Jordan Willimovsky who touched fourth overall.

Two-time Olympic medallist in this event, Ryan Cochrane of Canada, ended up sixth in the final just behind Mack Horton of Australia. Both swimmers were medal hopefuls going in but fell behind the lead pack early on.

As expected the Americans claimed the gold in this race well ahead of the rest of the competing nations, but the real battle was for the silver and bronze where it was a dog fight right into the wall.

While the Americans won in 3:53.13, it came down to the touch for the silver and bronze between Australia, Denmark, China, and Canada.

The Australians managed the best touch of the bunch clocking in a combined time of 3:55.00. Denmark was behind them by the smallest of margins, claiming bronze in 3:55.01.

The Chinese and the Canadians were just off the podium.

In the final sendoff for the greatest Olympian of all time Michael Phelps was golden once more, adding to his already impressive repertoire with a fifth gold at these games and his 23rd Olympic gold of all time.

Led-off by Ryan Murphy, the Americans were out fast. Murphy broke the individual world record in the men’s 100m backstroke on the leadoff, touching first in a time of 51.85.

After the breaststroke leg the British took the leads, but Phelps turned things around to put the Americans back in first as Nathan Adrian dove in to close things.

Great Britain picked up the silver, and Australia the third after the Chinese team was disqualified for their relay takeover.

“I have always stated a 30-year old body is not the same as one in their early twenties. I respect Phelps for giving it a try. I think he wants to add even more of a cushion to his Olympic medal lead, but this is a herculean task. I just don’t know if he’ll be able to get his resting/taper together for 2 meets within 6 weeks. I suspect Phelps may have a decent trials, but then his Rio performance will look like this meet.”-Tom from Chicago

“The other problem is that all his races are much more competitive. It looks like he’ll have a difficult time making the 4×200. At least 3 other guys will go 50. in the… Read more »

Thank you to the SwimSwam staff and everybody who commented here this week. You guys made it a blast, as usual.

Almost as interesting as the swimming to me are on-camera reactions from the athletes.
Best – Murphy’s nod to the last Phelps relay—class act; DiRado’s mix of emotion and reflection; Adrian- all around good at it; first King reaction- genuine; Phelps- best ever in the final relay.
Not so good: Chase. Funny but he’ll remain on the world stage and could use some training. Adams. No joy whatsoever. Even after a good finish. Baker. Mugging, too rushed and sounds like a very young girl. Needs Marsh media help.
And I’d like to see Phelps supplement or replace some of the current commentators.

Baker’s swims and silver individual medal could arguably be called her breakout on the international scene. I think she’s justified in sounding like an excited young girl because she is one, if not especially because she was predicted by almost nobody to final or place second in the world. Just my two cents. If she sounds the same in 4 more years, then maybe there’s a need for media training. As for now, she’s a teenage girl genuinely excited, happy, and humbled to have performed so well.

So World cup starts soon.
I wonder how many medalists will swim? ?
Or just use a month or so to mentally regroup?
There’s good coin on offer.

Just going through the thread one last time – and guess it a good time to post the gold (plus) medal tally::

See you in Budapest next year – if not before 🙂

Us swimming total medals counts as half of what the country has already won !!!! Pretty impressive

Your country is hundreds of times bigger than most others!

Nah just hundreds of times better. I don’t see much of India at these games. (pop 1.25 billion)

And China has 3 times our population.

See you in Hungary next year, that won the Medal Table in Europe. (Hosszu alone would won it)

Nicely done. You put some work into that list. I think that 3. A 3-tie for silver in men’s 100m fly is one of my personal favorites. It was kind of poetic- it almost seemed scripted.

I love that Rowdy called Peaty a secret weapon! Three times. Ha, who knew that the UK had a good breaststroke?

UK has a good breaststroke? Hmm didn’t know that. Thanks rowdy.