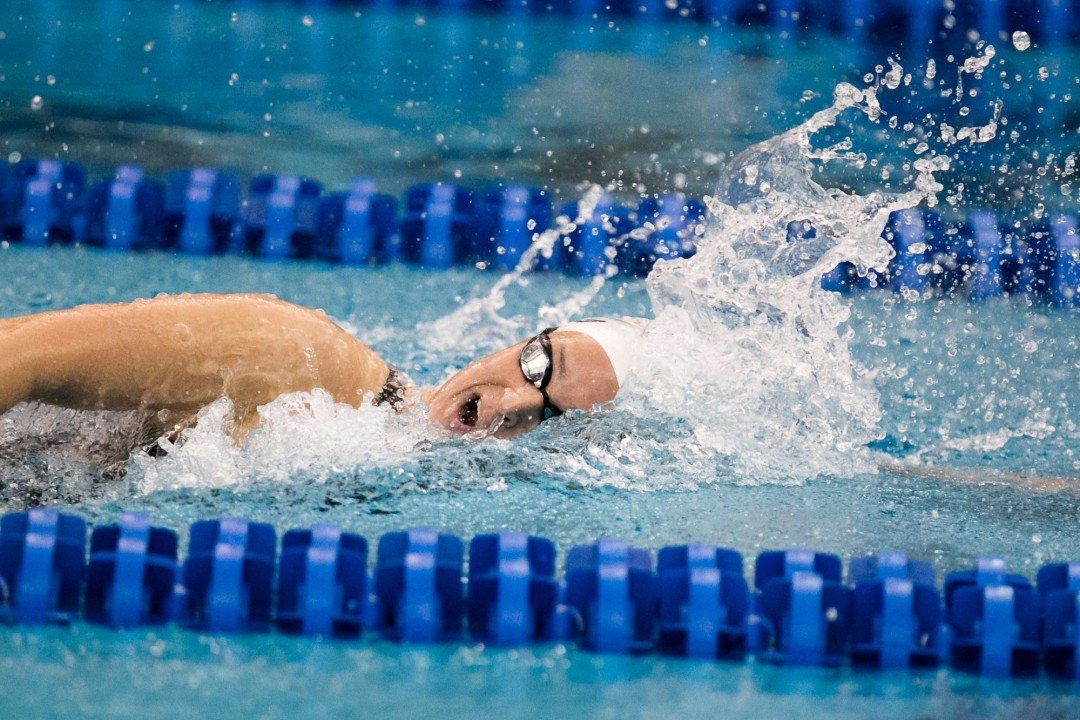 Leah Smith is the top seed in the women's 200 free on day 5. Archive photo via Tim Binning/TheSwimPictures.com

We’re up to day 5 of the 2015 World University Games, just past the halfway point of the swimming portion of the Games.

Thursday morning’s action will feature prelims of six new events. The men’s 200 back, women’s 200 free, men’s 100 fly, women’s 50 back and men’s 50 breast will move on to semifinals in day 5’s evening session, while the men’s 1500 participants get the night to rest, with the medal final on Friday.

It was American Jacob Pebley winning his heat and coming out with the top morning swim in the 200 back. Pebley was 1:59.46 – well off his incoming best time, but plenty enough to make tonight’s semifinal round.

He’ll be joined by American and Cal teammate Connor Green, who won the heat prior in 1:59.94 and took third overall. In between them was Italy’s Christopher Ciccarese at 1:59.58.

Just on the other side of two minutes is Great Britain’s Joe Patching, an NCAA swimmer for Auburn. Patching was 2:00.09, followed very closely by Russia’s Nikita Babchenko (2:00.23) and Japan’s Keita Sunama (2:00.26).

For the second-straight event, the Americans will take the top seed, and this time they went 1-2. Leah Smith was the only swimmer under two minutes, blowing out the field with a 1:59.43 for the top spot. Shannon Vreeland, who will swim this race with the U.S. 800 free relay at World Champs later this summer, was 2:00.00 on the dot.

Those two are fairly well ahead of the field heading into the semifinals. Australia’s Ami Matsuo was 2:00.88, and after her, things dropped off to a pair of German teammates who tied at 2:01.00 – Paulina Schmiedel and Alina Weber.

Japan also got two into the next round of qualifying with sixth-place Aya Takano (2:01.16) and seventh-place Yasuko Miyamoto (2:01.23).

In a rare prelim happening, Brazil’s Henrique Martins took the top qualifying spot in the 100 fly, swimming from heat 2 of 7. Coming in outside the circle seed, Martins blew up with a 52.57, a time that no other swimmer in the morning session could match.

The closest challenger was in that seventh and final heat, with Italy’s Piero Codia going 52.69. One heat prior to that, the two American entrants tied for the win, and Matt Ellis and Matt Josa will remain tied for the third seed heading into semis.

Japan’s Masayuki Umemoto was the last guy under 53, going 52.98 for fifth. Switzerland’s Nico van Duijn, an NCAA standout for Georgia Tech, is sixth in 53.01, and just behind him is Bulgaria’s Yauhen Tsurkin, who was the top seed coming into the meet.

Teammates Rachel Bootsma and Elizabeth Pelton went 1-2 in their circle-seeded heat and held up for the first and third spots, putting the U.S. back on top after the men’s fly. Bootsma’s 28.39 barely nipped Australian Holly Barratt for the one-seed, and both are only about a half-second off the World University Games record with two more swims to go.

Barratt was 28.43, and Pelton’s 28.64 slots in as the third qualifier. That puts Bootsma and Pelton side-by-side once again in a semifinal tonight.

France’s Camille Gheorghiu was only a tick behind Pelton at 28.68.

The home nation of Korea will get a highly-placed semifinalist to cheer on tonight, as Yu Hyounji went 28.77 for the fifth seed. She beat out Italian Arianna Barbieri (28.81) for that spot. Behind them are Kazakhstan’s Yekaterina Rudenko and South African Jessica Ashley-Cooper, who tied for seventh at 28.85.

Italian Andrea Toniato blasted one of the best swims of the morning, going 27.06 to take the top seed and break the World University Games record in the 50 breaststroke.

The 24-year-old Toniato missed finaling in the 100 breast by just over a tenth, taking 9th in semis, but he looks a much better shot to make the final here. He crushed his heat by over half a second and is the top qualifier by just over four tenths.

That puts him 3rd in the world this year, behind only the previous two world record-holders, Britain’s Adam Peaty and South Africa’s Cameron van der Burgh:

He had to fight off Serbia’s Caba Siladi for that spot, though, with Siladi coming in at 27.59.

Not far back is Brazil’s Raphael Rodrigues at 27.62, and German Fabian Schwingenschlogl, an All-American for Western Kentucky who is now transferring to Missouri, went 27.85 for sixth.

Great Britain’s Jay Lelliott trailed for nearly the whole race in the final 1500 free heat, but made a thrilling comeback to take the top seed with a 15:08.47. He passed up Japan’s Ayatsugu Hirai late, but Hirai still nabbed the second seed at 15:09.01.

Hirai barely eked out that spot over the winner of the previous heat, Ukrainian distance man Sergii Frolov (15:09.34).

Japan’s Kohei Yamamoto (15:11.50) rounds out a top four that pretty well separated themselves from the field, though obviously lots can change by the final in a race this long.

The US’s Arthur Frayler was fifth in 15:17.83 after finishing just behind Hirai in the final heat. Fellow North American Jon Thomas McKay of Canada sits sixth in 15:21.82.