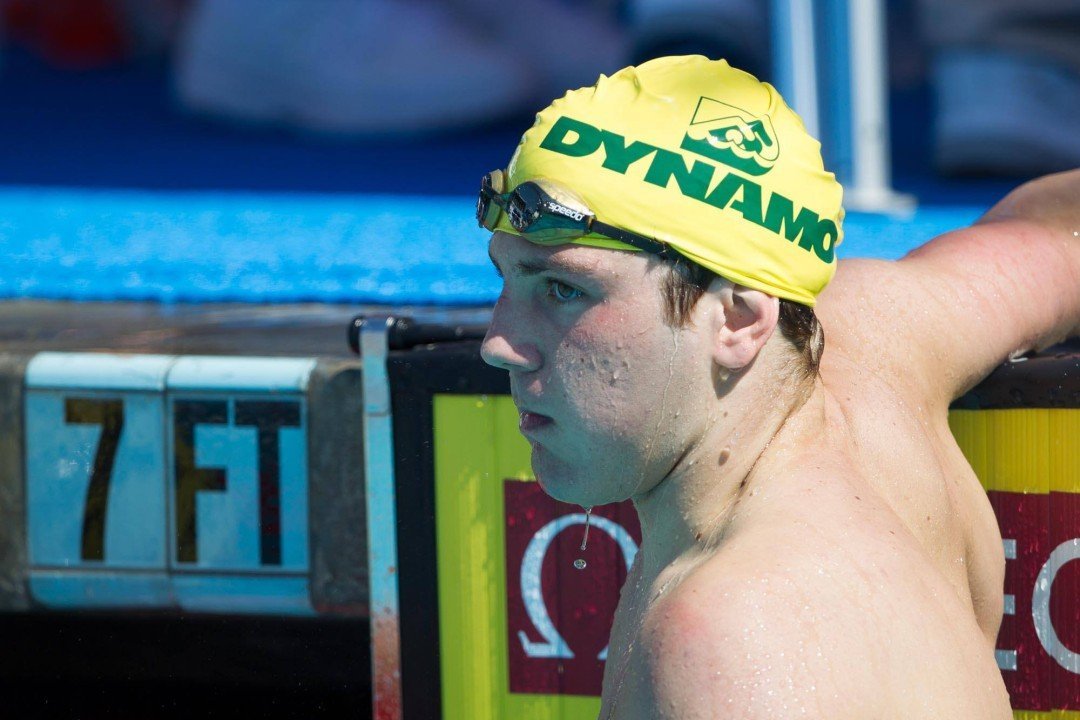 Michael Taylor is expected to take a shot at Ryan Murphy’s 15-16 NAG record tonight, but for this morning he was in cruise control. The Dynamo Swim Club swimmer recorded a 1:43.41, and it appears he will have little competition tonight if he approaches the 1:40.90 record.

Kaitlin Harty, swimming unnattached/YMCA of the North Shore, led all qualifiers at 1:53.70. That time was almost two seconds faster than her next closest competitor. 100 backstroke winner Alex Walsh hung back in 4th place, expect her to move up tonight.

It took 1:57.98 to swim in the A-Final, 1:58.91 to make the B, and just under 2:00 to make the C Final. In the team race, SwimMAC was able to get a swimmer in both the B and C final, while Walsh could potentially outscore those two with her A-Final swim for 2nd place Nashville Aquatic Club.

Earlier in the meet, Upper Dublin’s Michael Jensen was the only east swimmer to go 19 in the 50 freestyle, this morning he was the only 100 freestyle to get under 44. He led qualifying in 43.76. A surprise mover into the final was 15 year old Drew Kibler of Carmel Aquatic club, who improved his seed from 45.55 to 44.67 to qualify 4th.

Another big riser was Grace Countie from Marlins of Raleigh, who jumped from a long course seed time to a 50.23 to qualify 11th. SwimMAC was dominant, placing three swimmers in the A-Final as well as one in the C. It took 49.91, 50.47 and 50.70 to make the A,B, and C Final respectively.

Matthew Otto of Delaware Swim Club vaulted a lot of swimmers to take the top spot this morning in 1:58.65. In all there were six swimmers under 2:00.

Allie Raab of Nashville Aquatic Club led the way in 2:11.22, but there are plenty of swimmers that could vie for a title in this event tonight. National Junior Teamer Savannah Faulconer from the Y-Spartaquatics sits in 7th but still has the fastest best time in the field.

Nashville ended up with two swimmers in the top final, with 14 year old Ella Nelson joining Raab. SwimMAC was however also able to qualify two swimmers, as well as placing two in the B-Final. It took 2:15.30 to make the A-Final, 2:15.90 to make the B and 2:17.82 to make the C

Crown Point Swimming’s Hannah Kukurugya swam a bold race to make it into the top spot this morning. She swam the first 100 in 54.90 before fading slightly to 1:55.76. Top seed Lauren Case from Chattahoochee Gold made it in second.

Nashville Aquatic Club was able to get one swimmer, Tatum Wade, into the A-Final, while SwimMAC scored one B and one C finalist.

NOVA of Virginia’s Ted Schubert added a bit of time this morning but retained his top seed going into tonight’s finals. He’ll be joined by Camden Murphy, who rocketed from a 10th seed to the 2nd position with a two second time drop to 1:47.12.

NOVA will have three swimmers in the final, as Aaron Schultz qualified 4th and Will Riggs qualifed 8th.

Another DQ for Alexis Wenger. It says fly kick on the results. Wonder what her deal is; one would think she wouldve learned from getting DQ’d in her 100 for the same thing…………………