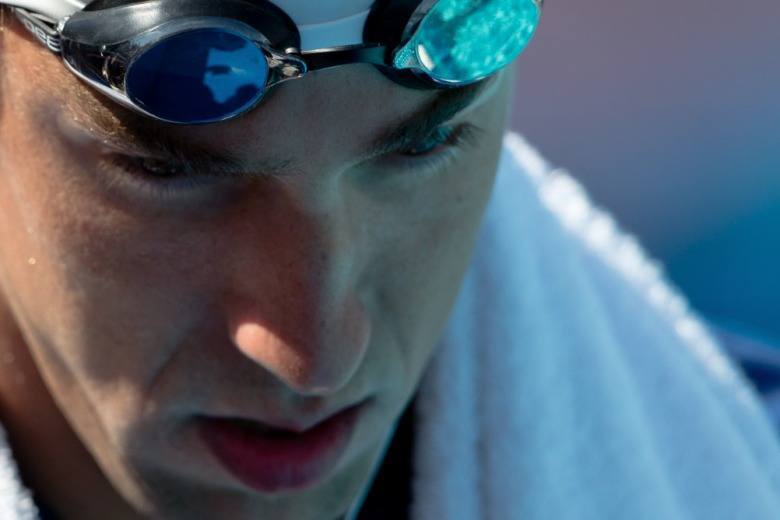 22-time Olympic medalist Michael Phelps will make his official comeback at the 2014 Mesa Grand Prix. But that's far from the only storyline to watch at this week's battle in the desert. Archive photo via Tim Binning/TheSwimPictures.com

1. That comeback you might have heard about: We won’t belabor the point. You’ve probably heard plenty already about the winningest Olympian of all time making his comeback from retirement in the desert this week. Michael Phelps will make his debut as a part of the new-and-improved NBAC professional squad  in Mesa, focusing on sprints (50 free, 100 free, 100 fly). This week will be a chance for fans – and Phelps himself – to gauge exactly where he’s at after nearly two years away from competition.

2. How about those loaded backstrokes? Mesa will be a fast meet all around, but there might not be a stroke with as much intrigue as the men’s backstrokes. Take a look at this all-star lineup in the 100: Olympic gold medalist Matt Grevers. World Champs silver medalist David Plummer. Swimming icon Ryan Lochte, on the comeback trail after his 2013 knee injury. Former Russian Olympian Arkady Vyatchanin, who’s been a staple on the Grand Prix circuit this season. NCAA breakout star Ryan Murphy, along with his training partner Jacob Pebley. Stanford pro Eugene Godsoe. Add in Olympic gold medalist Tyler Clary in the 200 (where Murphy might be at his most dangerous) and you’ve got a who’s-who of elite backstrokers who should make this race a showstopper. Even prelims will be exciting – just looking at numbers, there will be some big names missing out on the A final.

3. The other comeback story: Lost in the Michael Phelps hoopla is the fact that his former NBAC teammate and Olympic medalist Katie Hoff is making the first big-stage swim of her comeback. Once one of America’s most promising young swimmers (an Olympian at 15 and a three-time medalist at 19), Hoff had a disappointing run in the years following the Beijing Olympics and took much of 2013 off to focus on her studies. But Hoff has been quietly back in the water, posting some impressive times in local Florida meets. The Hoff comeback is one of the more underrated stories in the swimming world right now: she’s still just 24 years old with outstanding versatility. She’ll swim the 100 free, 100 fly, 200 free, 100 breast and 200 IM in Mesa. Oh, and she’ll likely be sporting that engagement ring she got while throwing out the ceremonial first pitch at the Tampa Bay Rays game on Sunday as well.

4. Grand Prix points race heats up: The Grand Prix circuit is giving away $150,000 in total prize money over the course of its 6 stops, with the top three finishers in each event earning prize money. First place nets $500, second $300 and third $100 – but those amounts also correspond to Grand Prix points, with first earning 5 points, second 3 and third 1. The top point-earners at the end of the series win a 1-year lease of a BMW, a pretty cool prize for a sport where earnings are still sparse.

Right now the men’s standings are deadlocked, with NBAC teammates Conor Dwyer and Yannick Agnel each holding at 27 points. Agnel isn’t eligible for the car prize (only U.S. swimmers can win the lease), but there’s certainly some friendly competition between the two for the Grand Prix title. Each will swim 6 events in Mesa. For the women, Megan Romano leads, but Caitlin Leverenz is just 2.5 points back. Second-place Katinka Hosszu won’t be competing, as she’s in Brazil at the Maria Lenk Trophy this weekend.

5. Master’s World Records on high alert: This year’s Mesa Grand Prix is dual sanctioned by USA Swimming and U.S. Masters Swimming, meaning registered Masters members are eligible to set Masters World Records at the meet. Hunting those records will be such names as Nathan Adrian, Anthony Ervin and Darian Townsend. All three are entered at the U.S. Master’s National Championships in early May, so should be Masters eligible for Mesa.

Just a few of the records that could be in jeopardy:

*Note – Townsend is still 29 years old, but per FINA rules, a Masters swimmer’s age is officially determined by his/her age on December 31st of the year of competition. Townsend turns 30 in August, meaning he’s eligible to break 30-34 records at this time.

Only $150K prize money over 6 stops or 25K per stop. Pretty darn weak still. Consider the 30th baseball draft signee out of HS with about a $2 mil signing bonus, and baseball has been on the decline for over a decade.

On the decline? Not in attendance or revenue…

Stats don’t lie. For example, SF Giants 8-3 win over Detroit a couple years ago set the record low television rating for a “World” Series opener with a 7.6 rating and 12 share. The previous year of 8.7 for St. Louis’ 3-2 win over Texas was the prior low, which had broken the low set from the prior year, Giants over the Rangers. Get the picture. Here’s also a couple article links, NY Times and one other, on the decline of baseball:
http://www.huffingtonpost.com/joey-spitz/is-americas-pastime-dying_b_3686366.html

Swimming, like fussball/futbol/football/soccer has accomplished, can grab a portion of the summer share from declining baseball if they would market the events & format properly!

PAC12BACKER – I stopped reading when you said “Stats don’t lie.”

I would take a look at this and some of the articles linked within.

Of course, the relative numbers are going to decline as the national population grows and there are more sports and other entertainment options competing with baseball. However, either of those articles mention the fact that baseball still has the highest total attendance of all professional sports (yes, I MLB has 10x more games than the NFL), and while they both mention tv ratings, I don’t believe either takes into account the very popular MLB.tv subscription service. And again, baseball’s total revenue has roughly doubled over the past ten years. Sure, baseball will never command the national attention that it did in the 1930s, when it was essentially the only game in town, but there’s still massive attendance and 20-30 years… Read more »

THETROUBLEWITHX, that’s a good time because the crosstown rivalry occurs just before and during Nationals. Dodgers play the Angels at Chavez ravine on Aug 4 & 5, and the Angels host the dodgers the following two dates. And Braden, those TV rating stats don’t lie, unlike some other “stats” touted by, for example, some politicians.

USAS doesn’t have an unlimited budget, and I’d rather see money available to elite athletes go toward training stipends for more athletes (and could we add a 3-4 discretionary funding picks every year so that someone really talented who is hurt/hugely pregnant/sick at selection meet time doesn’t lose a year of funding) than for prize money at meets that, while often highly entertaining, don’t matter very much compared to Worlds/Olympics/Pan Pacs.

Men’s 100 back – listed in your article! Pros vs. Amateurs

Major League baseball recently signed an 8 year $12.4 Billion deal with Fox for broadcasting rights. So it may be in the decline, but it is not hurting. Plus the American League average for home attendance each season is around 2.3 million people, per stadium. I love swimming but it is not in that class.

This should be exciting. Phelps has a busy day on Thursday.