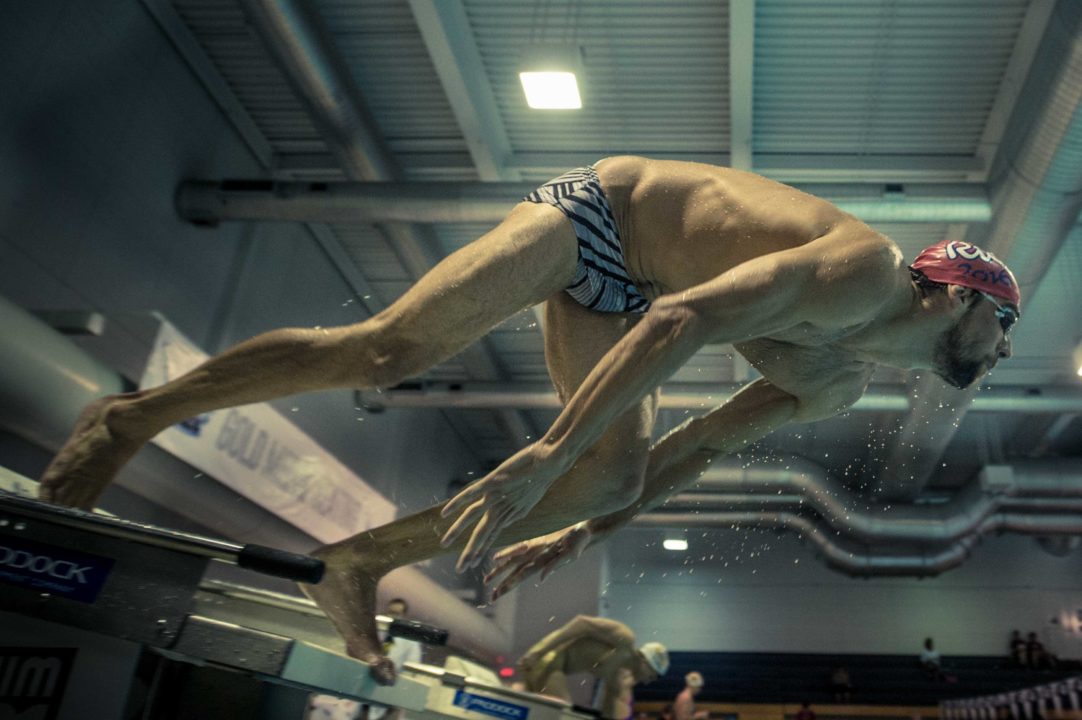 Michael Phelps took the second seed in the 100 fly on Friday morning, and will be fresher at night after scratching the 200 free, where he finished 8th. Current photo via Mike Lewis/Ola Vista Photography

Jones is training harder than ever in the middle of an Olympic quad, using Mare Nostrum to find his nitro.

Jaeger wins the 400 free at the Charlotte Grand Prix and discusses his desire to be a yogi.

The first full day of action at the 2014 Charlotte Grand Prix gets underway this morning, and it couldn’t kick off any bigger.

The 200 free, perhaps the marquee event of the meet is the very first to go off. It’ll be, among other things, the longest test yet of Michael Phelps‘s still-young comeback. But he’ll have to showdown with French superstar and NBAC training partner Yannick Agnel, as well as their teammates Conor Dwyer and Matt McLean plus a whole host of others.

The women’s 200 free should be a great one itself, with Allison Schmitt holding the top seed but Hungarian machine Katinka Hosszu nipping at her heels.

In the 100 breast, Micah Lawrence will look for the win in front of her hometown SwimMAC crowd against Jessica Hardy. There’s the men’s 50 back, featuring David Plummer and Nick Thoman, before Phelps returns to swim the 100 fly in the first double of his comeback.

Keep refreshing this page for live recaps of the events as they happen.

After absence in Mesa while preparing for the Brazilian Championships, the Maria Lenk Trophy, Katinka Hosszu is back to try and continue domination of scoring in the American Grand Prix Circuit with a huge prelims swim of 1:57.86. That’s just off of her season best, but puts her comfortably out ahead in what by her standards is a light session: she’s swimming only two events, the 200 free and the 400 IM.

American Allison Schmitt took 2nd in 1:59.23, and is probably the only swimmer with the mettle to challenge Hosszu in finals.

Virginia freshman Leah Smith is the 3rd seed in 2:00.18. Smith usually swims very well at these “bumper season” (aka, April/May) Grand Prix meets, so this result was a positive, but certainly no surprise. Anything around a 1:59-low in finals would be exciting for her.

Grand Prix series points leader Conor Dwyer continued his reign early here, nabbing the top seed and inside lane for tonight’s 200 free. Dwyer went 1:49.31, one of just two swimmers under 1:50 this morning. Second seed is new pro Connor Jaeger, best-known as a miler, but who always seems to show great freestyling range down to the 200. The Michigan post-grad went 1:49.90.

Behind them, Dwyer’s teammate Matt McLean beat our Jaeger’s teammate Anders Nielsen for the third seed. McLean went 1:50.00 after finishing second in the 800 last night, and the Danish Nielsen went 1:50.93 for fourth.

That kicked off a line of swimmers with Michigan Wolverine ties. Michael Wynalda, who also just wrapped up his college years in Ann Arbor, went 1:51.27 to take the five-seed, former Michigan NCAA champion Tyler Clary took 6th with a 1:51.30, and current Club Wolverine pro Michael Klueh was 1:51.52 for the 7th seed.

Perhaps the two biggest names in the field came in at the bubble for the championship final. French star Yannick Agnel barely snuck into the big dance with a 1:51.61, while his NBAC training partner Michael Phelps just missed out, taking 9th place in 1:51.69.

Update: It appears Agnel has been disqualified for a false start, moving Phelps up to 8th overall. Phelps, however, has scratched the race for finals to focus on his 100 fly.

Phelps will lead a powerful B final, though, that includes Olympians Charlie Houchin and Thiago Pereira, plus Florida’s Mitch D’Arrigo and England’s Lewis Coleman.

17-year-old Lilly King of Newburgh jumped into an inside lane with the 2-seed – her 1:09.57 just beat out Meili for second. Fourth is Emily McClellan, now going pro after a breakout career at the University of Wisconsin-Milwaukee. McClellan went 1:10.10.

Mike Alexandrov has been a staple of the breaststroke events on this Grand Prix circuit, and he took the top 100 breast seed at 1:02.52. Now with the New  York Athletic Club, Alexandrov leads by just about a half second over Canada’s Matthew Ackman (1:02.94).

Brendan McHugh jumped in with the third seed at 1:03.05. Louisville Cardinal Kameron Chastain went 1:03.38 to come in just behind him for the fourth slot.

17-year-old Ross Palazzo just touched out Louisville’s Thomas Dahlia for 7th, so both will presumably swim in the A final tonight. Palazzo went 1:04.29 representing Hudson Explorer, while Dahlia put up a 1:04.33.

Great Britain’s Christopher Steeples is just on the outside looking in with a 1:04.45.

It’s been a good day for Michigan swimmers, and Ali Deloof continued that by taking the top spot in the women’s 50 back. She went 28.97, the only swimmer under 29 seconds in the morning session.

Belarus swimmer Sveta Khaklov is just .01 back of Baker, with SMU college star Isabella Arcila a tenth back of that in 29.33.

Gator Swim Club’s Fernanda Gonzalez Ramirez and SwimMAC’s Ashlyn Koletic round out the top 8, going 29.54 and 29.57.

Continuing the Michigan theme, Club Wolverine pro Junya Koga won prelims of the men’s 50 back, going 25.57. Just behind him, though, is New York Athletic Club’s David Plummer, who won the silver medal in the 100 back at Worlds last summer and might be even more dangerous in a 50. Plummer went 25.70.

Also into the A final are Albert Subirats, competing for Auburn Aquatics, and 15-year-old Michael Andrew. Subirats was 26.24 and Andrew 26.31.

Canada’s Katerine Savard leads the 100 flyers into tonight. The 20-year-old went 59.29 for CAMO, hoping to add to her win at the Orlando Grand Prix in this event.

Kristel Vourna went 59.51 for the second seed, and U.S. Olympian Claire Donahue joined them under a minute with a 59.85. Those three should have a great battle tonight for the win and the $500 prize.

ACC Swimmer of the Year Pavel Sankovich had a spirited battle with comeback kid Michael Phelps in the fastest of the prelims heats, with Sankovich just touching out Phelps 53.23 to 53.26. Those two immediately shot to the top of the standings and stayed there, and should be set to repeat their battle from the center lanes in tonight’s final. With Phelps scratching the 200 free, we’ll see how much fresher he’ll show up for this race at night.

The Bolles School’s Mario Todorovich just touched out SwimMAC’s Matthew Josa for the final A heat spot, 54.51 to 54.54.

In her second swim of the morning, Hungary’s Katinka Hosszu took her second top seed, reminiscent of her Orlando Grand Prix performance where she was nearly unbeatable. Her 4:39.53 leads the field by over 5 seconds coming out of prelims, and Hosszu likely has more in the tank for tonight as she makes a run at the overall Grand Prix points lead.

New NBAC transfer Becca Mann nabbed seed #2 out of an early heat, going 4:44.69. She’s a little over two seconds up on Florida grad Elizabeth Beisel (4:47.18), who is just kicking off her pro career.

Vietnamese national Vien Nguyen went 4:48.15 after a solid swim in the 1500 last night. Behind her is Bluefish swimmer and University of Minnesota commit Brooke Zeiger in 4:50.49.

Tonight’s men’s IM race is a battle of generations. Once the greatest 400 IMer in NCAA history, Tyler Clary saw his dominant NCAA and American record shattered earlier this year by the greatest 400 IMer of the current college ranks, Chase Kalisz. This morning, Kalisz took the top seed over Clary, but both appear to have plenty of room to move come finals in what should be an outstanding race.

And behind those two is one of the up-and-comers from even the next generation down the road: NCAP’s Andrew Seliskar. The 17-year-old went 4:26.78, and it’ll be interesting to see how he fares against those top two tonight.

Connor Jaeger continued to have a strong showing of versatility at this meet. The 800 free winner from last night also had a high finish in the more sprint-oriented 200, and now grabbed 4th in the 400 IM at 4:27.25.

That leaves the third Litherland, Mick, just outside in 4:29.88, along with Florida Gator Sebastien Rousseau, who is tenth in 4:30.75.

The 50 breaststrokes come at the end of the session, setting up a sort of rematch of the 100s which happen earlier on. For the women, Jessica Hardy took this second, shorter opportunity to get back ahead of SwimMAC’s Micah Lawrence, who took the 100s fastest time despite Hardy coming in with the top seed.

Texas’s Gretchen Jaques hit 32.51 and Texas alum Laura Sogar was 32.75 to get both Longhorns into the A final in 7th and 8th.

The men’s 50 breast was the final event of prelims. This time it was UPenn grad Brendan McHugh who put up the top time, a 28.23 that leads the field by just under a tenth.

NYAC’s Mike Alexandrov is in hot pursuit of double wins for the night. The top seed in the 100 breast, Alexandrov went 28.31 to grab second here. Just as in that 100, Canadian Matthew Ackman follows him. Ackman went 28.64.

Tennessee grad Brad Craig (29.00), and Louisville’s duo of Kameron Chastain (29.14) and Addison Bray (29.16) will round out the championship heat for tonight.

% of chance to see MP scratch the 200 free final tonight (if he qualifies)? 🙂 It would kill his 100 fly final just later. I’m not really in favor of seeing him swim the 200 free again in individual so I wouldn’t cry for that. And if he does, I don’t expect something better than 1.48/1.49. Probably Agnel for the win ahead of Dwyer. We’ll see. I read recently that MP would go to Colorado in a few days for high altitude training with the NBAC group. Great battle to watch on the women’s side between Schmitt, Hosszu and Vreeland in the 200 free. Local swimmers Nick Thoman and Kathleen Baker should swim very well this weekend. I will… Read more »

Me? I would underestimate my swimming idol? Are you serious? 😯
But being fan doesn’t mean being blind.
I think that if Michael swims the 200 free in the future it will be only for the relay.
It requires so much training.
Remember 2012 when he drops that event in individual for London. it was the smartest decision ever!
All for sprint! All for sprint!

I can’t see it

B Final, so probably 100% chance of scratch unless someone in the A Final scratches first…

Not working everyone I think.