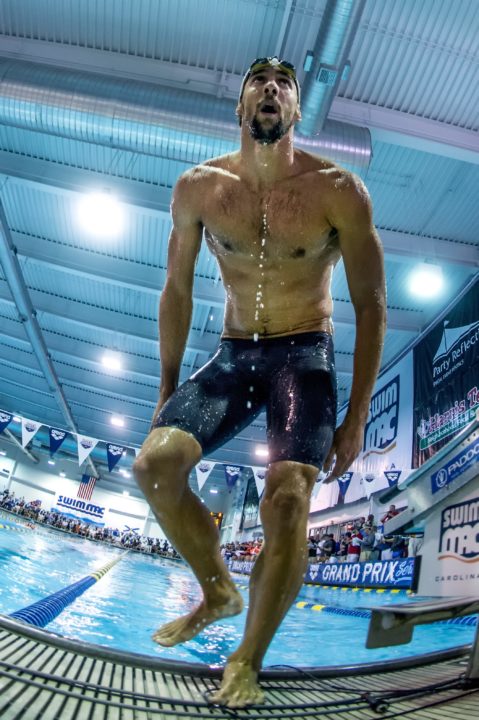 Update: Dylan Bosch put up a surprise 200 free in the B-Flights of the 200 free, which beat his seed... Archive photo via Mike Lewis/Ola Vista Photography

Update: Dylan Bosch put up a surprise 200 free in the B-Flights of the 200 free, which beat his seed time by 7 seconds. That actually bumped Phelps back to 9th in prelims, though with the scratch in the books, it was mostly moot by then.

Prior to the 2014 Charlotte Grand Prix, Michael Phelps’ coach Bob Bowman said that the pair was looking forward to seeing how he could do in the 200 long course meter freestyle: a race he hasn’t tried since returning from 18 months of retirement three weeks ago in Mesa, Arizona.

The first result will get mixed reviews, as Phelps swam a 1:51.69 to place 9th. His coach Bob Bowman said after the race that he would be scratching the event in finals, however.

Phelps got caught in somewhat of a slow heat in prelims; the winner Michael Klueh is only the 8th seed in prelims in 1:51.52. After initially being announced as the 9th-place finisher from the A-flights, Phelps’ NBAC teammate Yannick Agnel, the Olympic Champion and World Champion in this event, was disqualified post-facto for a false start. The top seed out of prelims is another North Baltimore swimmer Conor Dwyer, in 1:49.31.

Phelps’ first freestyle race of his return looked solid. On the 3rd 50, he began to look rather pedestrian and disappeared back into the field, an observation that was supported by his split on that leg of the race.

Coming off of the final turn, we were all treated to that glimmer of Phelps of years past. He rocketed his last underwater, staying down a good 6 meters longer than anybody else. The result was a 27.84 split, which blew away his heat.

That underwater and the split it produced, perhaps, masked where Phelps is still working to build his endurance back up. Even after the great underwater, he wasn’t able to power away from everyone like we’re used to seeing from him after those great turns. As he’s falling back into his competitive rhythm, though, it’s a good sign that he’s getting back those details. His turns, that are part of what made him so special throughout his career. If he’s feeling good underwater, that’s a comfort zone that  he can build on as he heads toward bigger meets and continued training.

Phelps said after the race that Phelps might try the 200 again this summer, leaving the door open-ended after what he called “good not great” swim as to whether this event is in his long-term plans.

After the Phelps scratch, Michigan’s Peter Brumm moves into the A-Final.

1:51 from Phelps is a pretty darn solid swim for him so early in his comeback. So Agnel had a “twitch” false start DQ, is that right? I like the newer international track rules, where small movement, such as a flinch or twitch that doesn’t gain advantage is not a disqualification anymore.

I agree. 1.51 is a very decent swim so early in his comeback.
He could have probably swum 1.49 in final as he did before at this period of the year.
I’ve made a few researches and he wasn’t much faster in the previous years.

All Club Wolverine or NBAC swimmers in that final. I consider Clary CW since he’s jumping between Ann Arbor and swimmac.