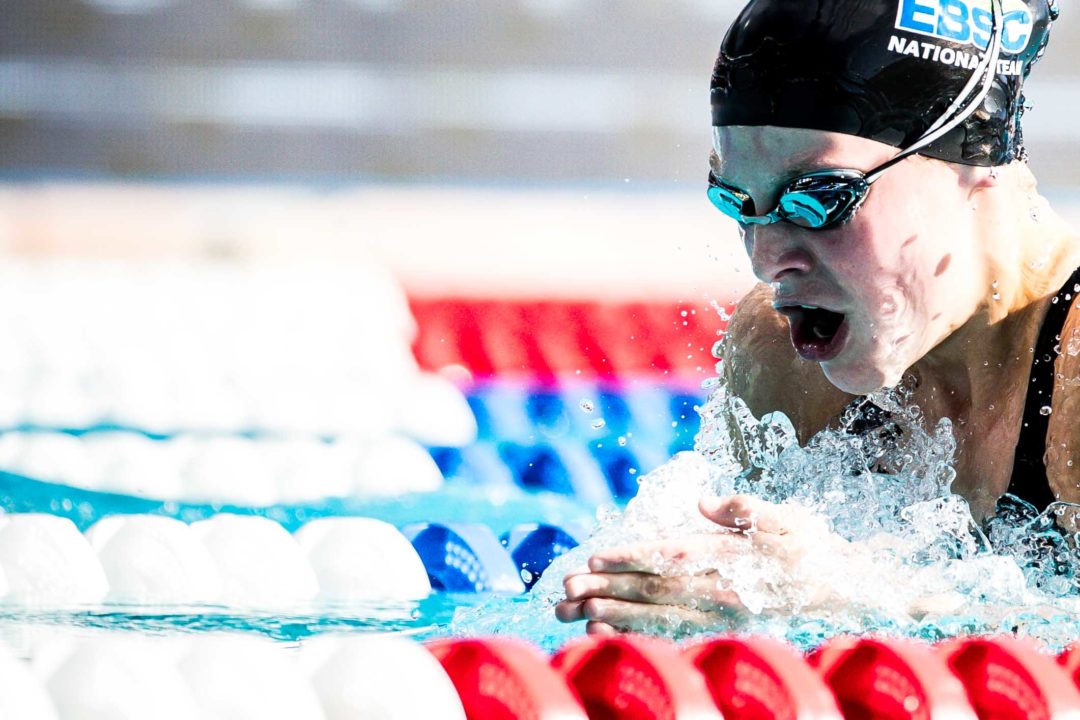 On day 1 of the Wisconsin 18&Under Winter Championships, swimmers returned to the Pleasant Prairie RecPlex for the finals session in long course after racing prelims in short course earlier. Multiple 18&Unders grazed the boundaries of Olympic Trials cuts tonight, although their long course results will not count toward the USA Swimming’s 18&Under Winter Championships. Prelims and finals times are weighted the same in the 18&Under Championships, so their short course yards results from this morning will count.

In finals, Olympic Trial qualifier Lucy Thomas of Elmbrook Swim Club dominated her signature event, the 100 meter breast in a time of 1:10.46. The 15-year-old added time to her lifetime best, 1:09.35, which she swam as a 14-year-old in August and which ranked her #3 all-time in the 13-14 age group. In her current age group, this swim tonight ranks her #64 out of the all-time fastest 100 breaststrokes in a tie with Kaki Christensen. Thomas raced 15-year-old Maggie Papanicholas of Glenbrook Swim Club who snagged 2nd place with a time of 1:11.04. That’s a drop of .07 for Papanicholas who swam her previous best at U.S. Open last month. Tonight, she narrowly missed the Olympic Trial cut of 1:10.99 by .05.

In the 100 fly, 15-year-old Campbell Stoll of Elmbrook Swim Club dropped nearly 2 seconds for 1st place, touching the wall at 1:01.95. Her previous best was from the Wisconsin 13&Over State Meet in August, 2019. 17-year-old Lauren Malinowski of Waukesha Express Swim Team (WEST) was close behind at 1:02.08, dropping 2 seconds from her previous best from the same meet in 2019.

Stoll ended the night with another victory in the 400 IM, touching the wall 1st with a time of 5:01.06. Her teammates, 16-year-olds Reese Tiltmann and Grace Drabot, tied for 2nd this morning in yards, but tonight Tiltmann snagged 2nd place at 5:03.17 with a 3 second lead over Drabot.

Wisconsin class of 2025 commit Abby Carlson of WEST claimed 1st in the 200 free with a time of 2:04.49, adding 1.5 seconds to her best time from August, 2019. This is one of Carlson’s best events and one of her 2 Summer Juniors qualifying events alongside the 100 meter freestyle. WEST’s Abby Wanezek, a Wisconsin class of 2026 commit, snagged 2nd 2:07.83, adding just over 1 second to her lifetime best from last year.

On the men’s side, 16-year-old Ozan Kalafat of the Mid Wisconsin Wave Makers (MWWM) out touched Navy commit James Lyon of Aulea Swim Club by .12 in the 200 free, claiming 1st place with a best time of 1:56.28. Lyon’s time of 1:56.40 was also a best time, taking .11 off of his previous best from Futures in 2019. Kalafat was scheduled to swim in the 100 breast final after placing 9th in prelims, but he did not compete in the event tonight.

Lyon went on to swim the 100 fly, placing 4th at 57.00 and crushing his previous best from 2019 Futures by over 1 second. Texas commit Holden Smith of Race Pace Club won the event with a time of 54.70, taking more than half a second off of his previous best from March. Now, Smith is .51 away from the Olympic Trial qualifying time. 16-year-old Will Hayon of MWWM took 2nd place, also with a best time of 55.07, lowering the Summer Juniors qualifying time he swam in June, 2019. This ranks Hayon 83rd out of the all-time fastest 15-16 year-olds in the event, although he still holds the 10th fastest 100 meter fly in the 13-14 age group.

Aulea Swim Club swept the top-2 finishes in the 100 breast as 16-year-old Thomas Caps touched the wall 1st at 1:03.35, ahead of Cal Baptist commit Jonathan Reiter (1:04.13). Caps came within .06 of the Olympic Trials qualifying time tonight and .05 of the LSC record after taking 1 second off of his best from the U.S. Open last month. Reiter also crushed his previous best, from the same meet, by 1.5 seconds. Caps and Reiter placed 1-2 in the short course version of this event at the Hawaii High School State Championships in February.

15-year-old Isaac Fleig ended the finals session with a victory in the 400 IM, touching the wall with a best time of 4:35.53 and lowering his Futures qualifying time which he swam in August of last year. Miami University (Ohio) sophomore Jack Clouatre of Highlands Ranch Aquatics finished in 2nd place at 4:42.70, taking nearly 3 seconds off of his previous best from Futures in 2019.