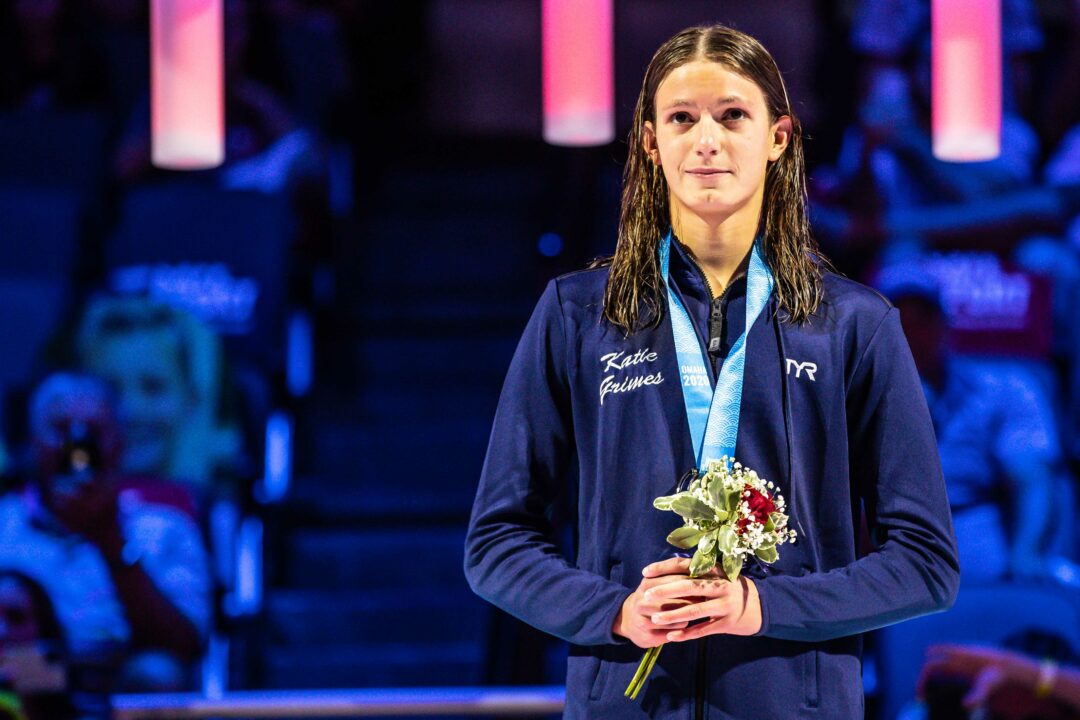 Tokyo Olympian Katie Grimes followed up her National 10k win on Friday by taking home gold in the Junior National 7.5k with a substantial lead over the field Archive photo via Jack Spitser/Spitser Photography

The top 8 finishers (unofficially, per USA Swimming’s live stream) are:

Grimes established a 6-body-length lead early on in the race, her blue and yellow Sandpipers cap visible far ahead of the field. The packs behind her also set a fast pace, quickly creating large separations between the groups. 15-year-old Claire Stuhlmacher, 16-year-old Cadence Fort of Gulf Coast, and 16-year-old Courtney Watts of Machine Aquatics were up in that first pack trailing Grimes for most of the race.

Heading into lap four, Grimes’ lead swelled to about 42 seconds as she continued to swim in a pack of her own. This lead was insurmountable and she finished in first place. The swimmers behind her made big moves on the final two laps where four athletes overtook Fort and Watts – Long Island Express’s Mary McKenna, Long Island Aquatic’s Sofia Giordano, Loveland’s Elsa Fullerton, and Kamehameha’s Kaimakana Flanagan.

Grimes is already part of the U.S. National Team after winning the 10k, and she qualifies in the pool in the 800 and 1500 freestyle. This means she is ineligible for the National Junior Team and the spot goes to Stuhlmacher.

But, Grimes is eligible for the World Junior team and has earned the first spot with her 7.5k win. Stuhlmacher’s birthday falls between July and September, meaning she will also be within the 16-17 age group by the end of the year and therefore qualifies for the second World Junior team spot.

Claire Stuhlmacher had an amazing race from the outset. What a break out swim! Not to take away from other swimmers accomplishments, but it’s too bad that beyond first place this article focuses on 3rd and 4th places when, Claire commanded 2nd place the entire race, qualified for the world Junior team, and finished about 1:40 behind Grimes and ~1min ahead of 3 and 4th place. Way to go Claire!!

Agree great race by Claire! I watched the race on live stream and she was gritty start to finish and never let up swimmimg all on own for the most part. Amazing & congrats!

Way to go Kai, great effort and swim! Your Nebraska fans are proud of you!

Cadence Fort is very interesting. She’s a former National Team member in the 10K, and only 16:53 in the SC mile. I wonder if it was a fluke or if she just hasn’t swam in the pool seriously yet.

I really hope they add 6.25 km and 8.75 km distances. The 5 km and 10 km races were far from adequate for figuring out who was best at swimming fast for a long time and in the right direction, so the 7.5 km is a good addition, but we’re still not there yet.

The reason the 7.5k was introduced was for age groupers to have a progression rather than jumping straight from 5 to 10 which is super daunting. That’s why different age groups race different events at Junior Worlds! 14/15 do 5k, 16/17 do 7.5k and then 18/19 do 10k. It also helps keep people in the sport and progressing as they get older instead of feeling they have to jump straight to a 10k when they are still young

Let’s hope she is sharper than that

I’m wondering how many College recruiters are watching KT? LMAO

Answer: All of them

I know Stanford is going to want a good distance freestyler