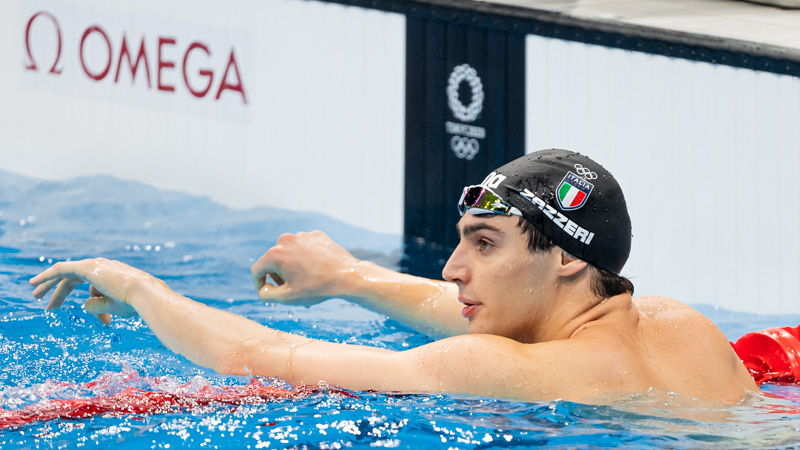 Lorenzo Zazzeri, whose star first rose to prominence during the pandemic because of his artwork, not his swimming, continues to build a massive athletic resume after swimming one of the fastest short course meters splits in history on Tuesday.

Swimming the 3rd leg of Italy’s 200 free relay, Zazzeri split 20.24. That ties him as the 8th-fastest 50 short course meter freestyle on a relay split since at least 2010*, and as the 6th-best performer in that category.

Note: there were some sub-20 second splits in 2008 and 2009 during the super-suit era, including two on the same French relay in 2008: Amaury Leveaux split 19.93 and Fred Bousquet split 19.87. FINA never ratified the World Record setting relay that those splits were swum in, because of the suits that were being worn at the time, so do we count the splits? That’s probably a personal decision.

Most of the names ahead of Zazzeri on that list carry substantially more weight than he does. Manaudou, Cielo, and Dressel are all Olympic gold medalists in the 50 free and current or former World Record holders. Rylov is the defending Olympic gold medalist in both the 100 and 200 backstrokes, while Liukkonen is the defending European Champion in the 50 free in long course.

Based on splits of that relay alone (both rolling starts and flat starts), and Zazzeri’s modestly-fast reaction time of .19, that puts him in line for his first major international gold medal later in the meet in the individual 50 free, where he’s the 17th seed.

Zazzeri has lots of minor medals from major meets in his trophy case, including a silver medal from the Tokyo 2020 Olympics where his 47.31 split on Italy’s 400 free relay was their fastest.

It’s since 2010 (because that’s as far back as the most reliable list available, via USA Swimming, goes reliably).

FWIW – I did some other digging, and couldn’t find any other sub-20 splits. But not confidently enough to say it for sure. That French relay was absolutely bonkers.

Ahh right. Cheers! I had the Omega timing sheet for years because it was so ridiculous to see 2 19 points never mind 1!

I also think that time was never ratified as a WR by FINA, so I imagine we could have a rousing debate over whether they should count on the unofficial fastest splits list.

Rousing!! 😀
I mentioned on another thread but there was chat Leveaux wore 2 suits at times during that meet. Just to stoke the debate further!

Dressel is capable of going sub 20 from a flat start easy. Hopefully in the ISL final.

Except he couldn’t in an illegal suit.

Not saying he isn’t capable, but it certainly won’t be easy.