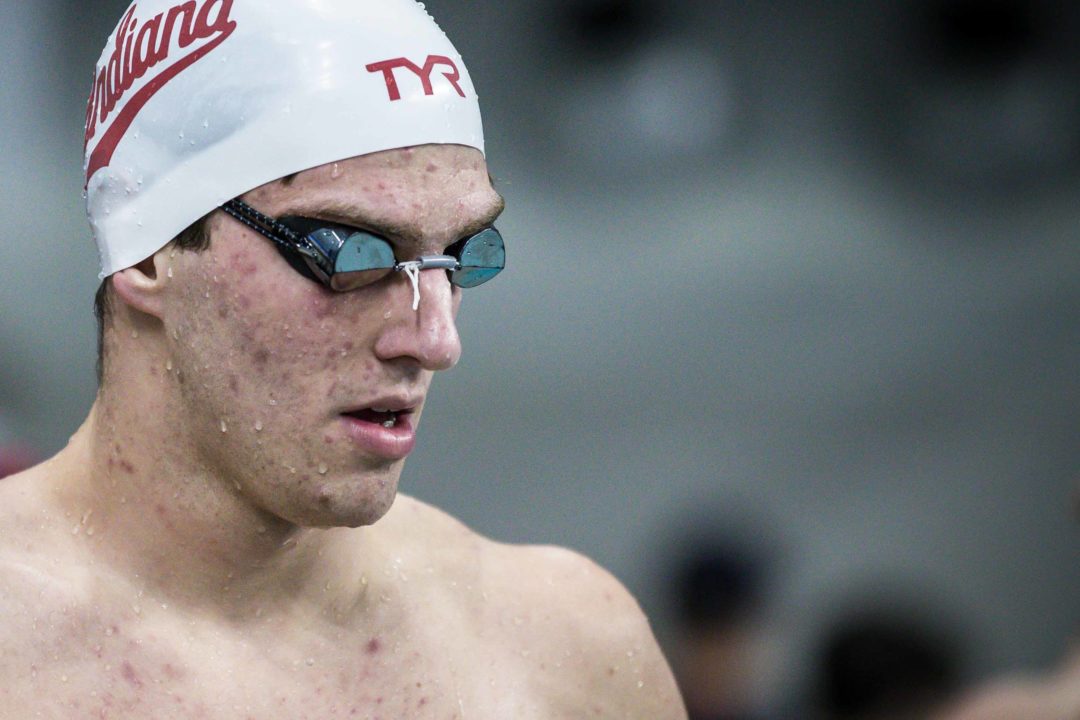 Zach Apple (above) and Blake Pieroni will do it for the 'Gram this weekend with a potentially pain-inducing 200 free plan. Archive photo via Jack Spitser/Spitser Photography

The collegiate action at this week’s two-day tri meet between Indiana, Texas, and Louisville will be the focus of the weekend between 3 of the top 8 ranked teams in the country.

There has emerged, however, a show-within-the-show, a sideshow of sorts. That is, the possible pain that US National Teamers Blake Pieroni and Zach Apple are about to experience.

In Friday’s 200 freestyle event, the pair, who specialize in the 100 and 200 meter freestyle events, have promised to try and split 49 seconds on the first half of the event. That would make good on a social media promise posted by Pieroni, where he said that if the Indiana Swimming & Diving Instagram account got 18,000 followers, the two would try the devilish deed. The account, which was just under 15,000 followers at the time of the post, has 21,800+ followers as of the time of this posting.

That means that they’ve blown through the goal, and we should see some 49s on the way. Fr those curious, even in peak form, the fastest swimmers in the world usually split somewhere in the neighborhood of 51/53 or 51/54 in the 200 free. At last year’s World Championships, the fastest opening leg in the final was Clyde Lewis, who split 50.73 en route to a 1:45.78. Apple tends to be a little faster on the front-half than Pieroni is.

For further perspective, Pieroni’s best-ever time at a non-championship meet in the 100 free is 48.69 (in June), and Apple’s fastest pre-new-year best time is a 49.75. That means that the pair will have to be pretty-much flat out to split 49s to the feet on Saturday.

But we should see other 49s in the 100 freestyle this week. The fun will be on the back-half. To stay true to the intent of the promise, the two should have to continue to push forward full-bore in the 200 to see what happens. A 49 to the touch followed by a 100 meter cool-down won’t be as much fun.

If we ascribe Indiana’s ~7,000 new Instagram followers to the 49-second promise, that will make this arguably the most-anticipated race of the weekend. Let’s see if it pays off.

I predict 50 points and then barely under 1:00 on the back half. This will not end well.

1.50 LCM at this point of the season with a so crazy split (49″ or 50″) would be a great result. The further problem is that, according to the article, the duo should continue to push forward to see what happens.
I think it’s fairly predictable what will happen: so much pain for the protagonists and a complete slow-down.
I have no fun in watching pain and I hope that Pieroni and Apple, two fantastic swimmers, will manage that bet in a plausible way.

Do we know if they will be doing this in prelims or finals?

No prelims at the meet – timed finals only. Not sure if it will be in a regular race or as an exhibition event.

49 to the feet in season will be pretty much all out. Pray for them if they’re anywhere near that. They’re gonna need the medical staff to revive them after the 2nd 100.