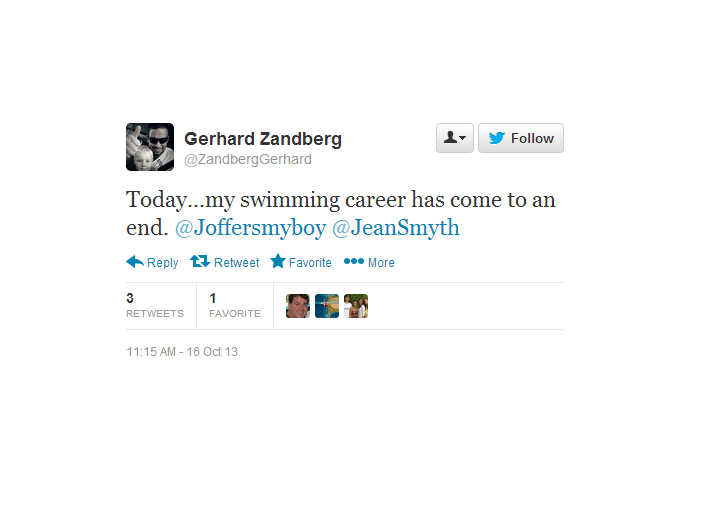 Zandberg, who is a 50 meter specialist, did not swim at the 2012 Summer Olympics (he didn’t even race at the trials). He made a brief return in 2013 at 30 years old, where he finished 13th in the 50 backstroke and failed to advance to the final after slipping off of the blocks in the final.

The comeback was not without controversy, though. He received from heat from Swimming South Africa after ‘breaking team rules’ in Barcelona. Specifically, after asking to swap rooms to avoid catching a cold that his roommate Cameron van der Burgh had contracted, and receiving no response, Zandberg paid for his own room, which he shared with his girlfriend Linda.

For a seemingly-minor infraction, Zandberg received a punishment of 50,000 Rand ($5,000) which was later reduced to 4,000 Rand ($500); a 2-year suspension from swimming; 1 year of community service; and an immediate scratch from all World Cup events, around which there is little ability for Zandberg to compete.

This left him with two options: either appeal to the Court of Arbitration for Sport in Switzerland, or retire. Waiting out a two-year suspension at his age would have been illogical.

Zandberg also took a gold medal as a part of the South African 400 free relay at the 2006 Commonwealth Games.

Zandberg’s only public statement on the matter was a simple Tweet where he said that his swimming career has come to an end. Tagged in the Tweet were two South African journalists who have been vocal critics of Swimming South Africa’s punishment.

choose-to-loose-attitude, South
Africa! now we have no gold medals in the 50m back, which Gerard did so beautifully! talk about stupidity…

A wonderful sportsman and a swimmer that has made South Africa proud. Perhaps it is time that a management was put in place that is there for the swimmers and actually promote swimming.
This is a travesty and the management should hang their heads in shame.

Swimming SA seems to have this completely the wrong way round: the administrators are there to serve the swimmers, not the other way round.

For our boys to keep achieving what they do at international galas while having to deal with the inept Swimming SA holding them back, is truly a special achievement.

Pathetic. He was an adult and not some age-grouper. He should be able to stay where he wants. Many Olympians, for example, have opted out of the Olympic Village. The only scandalous thing that he did was to stay with a female who was not his wife or his family member. Choosing to not stay with the team is not in itself a big deal.

It was his girlfriend. What’s scandalous about that?!

That punishment is rediculous, he’s thirty years old he should be allowed to have some freedom.