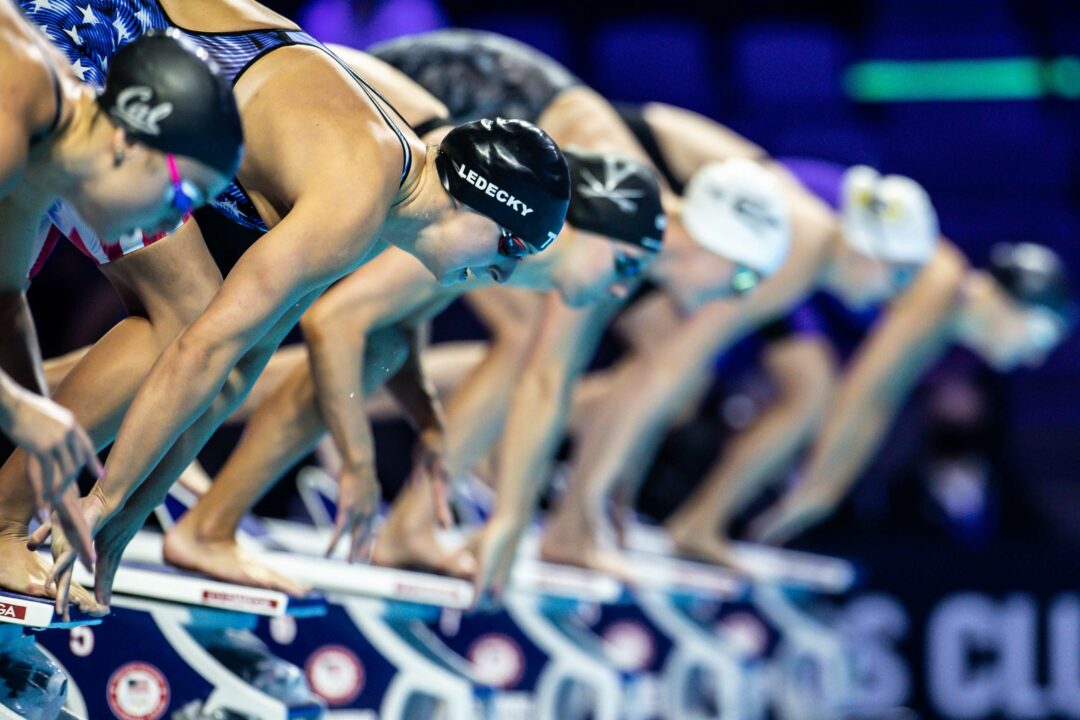 Tokyo will be the first time in history that an individual swimming event will see its last three Olympic champions competing on the Olympic stage. Current photo via Jack Spitser/Spitser Photography

Katie Ledecky and Allison Schmitt have qualified for the Tokyo Olympics in the women’s 200 freestyle after finishing 1-2 in the event at the U.S. Olympic Trials.

Ledecky will try to defend her Olympic gold medal won in Rio five years ago. As for Schmitt, she will return to swim the event at the Olympics. She swam the event in 2008, in Beijing, and in 2012, in London, when she won the gold medal and set the current American record. In 2016, she make the Olympic team, but as a relay-only swimmer.

The most past Olympic champions we have seen in the same race was two. It is not frequent, but it is not that rare either. For example, in 2016, Sun Yang, the 2012 champion, and Tae-Hwan Park, the 2008 gold medalist, competed in the men’s 400 free. Missy Franklin and Kirsty Coventry, the two most recent Olympic champions in the women’s 200 back at that time, faced each other.

But never before we have seen three Olympic champions of the same individual event compete against each other in this event on the Olympic stage. Pellegrini, Schmitt and Ledecky are already swimming legends. It will not be an easy task for any of them winning the gold medal again in the event, since they will be challenged by fierce competitors like Australians Ariarne Titmus and Emma McKeon. That’s why the women’s 200 free must be one of the most exciting races of the Tokyo Olympics.

And we’re almost certain to see a new Olympic champion crowned as long as Arnie is anywhere close to her time.

The terminatah will crush them

Ariarne swam almost a second faster than Ledeckys best ever swim at the peak meet of her career.

Titmus has to swim poorly for Ledecky to win the 2

I’m pretty sure they’re are many many who will be cheering for a KL repeat win.

Even in the game of chess one cannot avoid the cycle of prgress and decline. Acknowledge those having achieved being the best, but also celebrate those on the way to being the best. Nothing to do with loyalty.

An ironically an Aussie with no previous Olympic golds shall probably win!

Best of luck to all of course!

u did a beautiful copy-past comment here ….what’s the reason for that ? LOL🤪

My moneys on Pelligrini

4
-4
Reply
He said what?
Reply to  WahooSwimFan

I hope so. Let the Queen retire at the top,

Let? You have to earn the win not just have it given to you.

thats not a head to head. the article is pointing out that the w200 free will have 3 lanes filled with previous olympic champs in the event.

technically the title doesn’t word it that way, so I give Ferb the W

GOAT , and if someone breaks his 400 IM WR , it then took 3 great swimmers to take down a single man (Milak, Dressel, and Seto maybe?)

And Lochte and Beidermann as well. He unified 5 WR’s that are now held by 5 different swimmers.

Did past champions ever face each other in more than one event before 2016?

And they will all be beaten by the Aussie Titmus

Diversity in the sport is what makes it evolve …..and new Rivalries . How can u not see it yet is beyond many of the passionate fans here .

Maybe. The Aussies are good at blowing it based on recent memory. Could be all the pressure dumped on them by their country.

Most likely. However, there are famous examples of Australians being heavy favorites in individual events and then not delivering in the final.

could happen this year in 100 free if both Manuel and Oleksiak qualify: Kromowidjojo/Manuel/Oleksiak. The title only says last 3 olympic champions 🙂