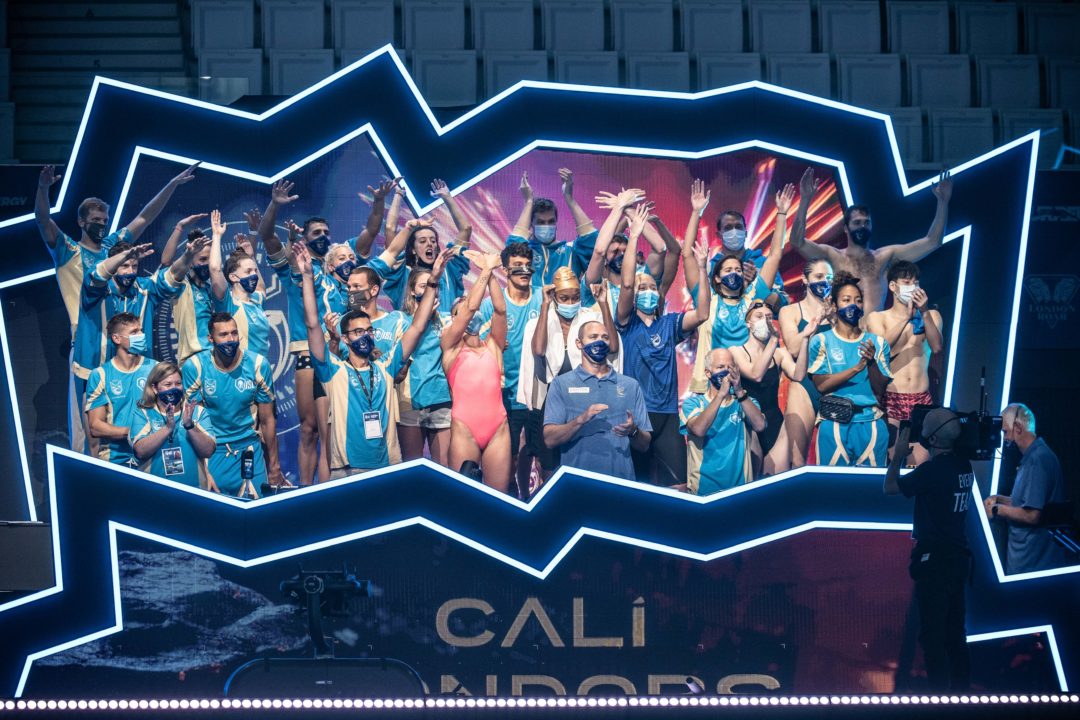 Three teams will now play roles in selecting the strokes of the high-scoring skins races in year 3 of the International Swimming League. Archive photo via Mike Lewis/Ola Vista Photography

The additions of Peribonio, Pietruschka, and Sorokina bring Cali Condors’ roster up to 33 swimmers for the 2021 ISL season.

The ISL has released its full rulebook for the 2021 season, with several notable twists and updates to the league’s format.

The major outcome is that we might see more variety in the skins races this season, unlike last year when the same teams mostly had a monopoly on the medley relay wins and only switched up their skins stroke selections when the meet didn’t really matter much.

One of the biggest rule changes will increase the scoring for the 400 free and 400 IM – currently the longest events in the official ISL format.

There’s no cutoff time at these checkpoints (so athletes in the top five don’t have to worry about a points penalty), but there will be a jackpot margin where the leader at the checkpoint can steal points from the rest of the top five.

If an athlete would have won prize money, but had their points jackpotted away, new ISL rules will split the prize money 50/50 between that athlete and the swimmer who jackpotted them.

I would love to see this lmao

Oh god what I would pay to see a seto, Hosszu or Litherland dragging themselves out of the water for a third time after swimming 800m, knowing they have to dive back in and do it again.

I think they went too far w the skins correction, getting to pick between only two strokes take off a ton of the advantage of winning the relay points. I think cumulative relay points is enough, and maybe second place gets to eliminate 1 stroke. After all, we do want to see lily king in breast skins sometimes, but this means we likely will never see it, unless I’m missing something.

I also think the jackpot correction goes too far, they should just eliminate it for skins, which is where murphy got the bulk of his money if I remember correctly.

Either way, it will be fun and I’m excited to watch!

OK I take my comment back about the jackpot correction, I thought they were splitting jackpot points, not money. Splitting money is a good move. I still think you shouldn’t be able to jackpot skins though

Sharing jackpot money is 100% the right thing to do. Awards trying to jackpot but doesn’t fully penalise the other swimmers of all their money. Should be a more even money split this year.

Anyone know if ISL has paid the athletes yet? In full no less?

They received a portion of money owed and a description of a plan to catch up on payment. Have not heard whether that plan has been executed yet.

Alright this is kinda cool, but when do we get an update on what is to happen with the distance swimmers who did the 800? Imma just throw these out here too: 4 x 200 medley relay? 10 x 50 free relay? Or….. a relay of the coaches or maybe every single person on each team swims in one relay. That last one is a bit crazy don’t actually do that.

10×50 mixed to finish the meet would be insane.

The 400 IM scoring favours the best front half swimmers. Fair enough though cause breastroke is still weird 😝