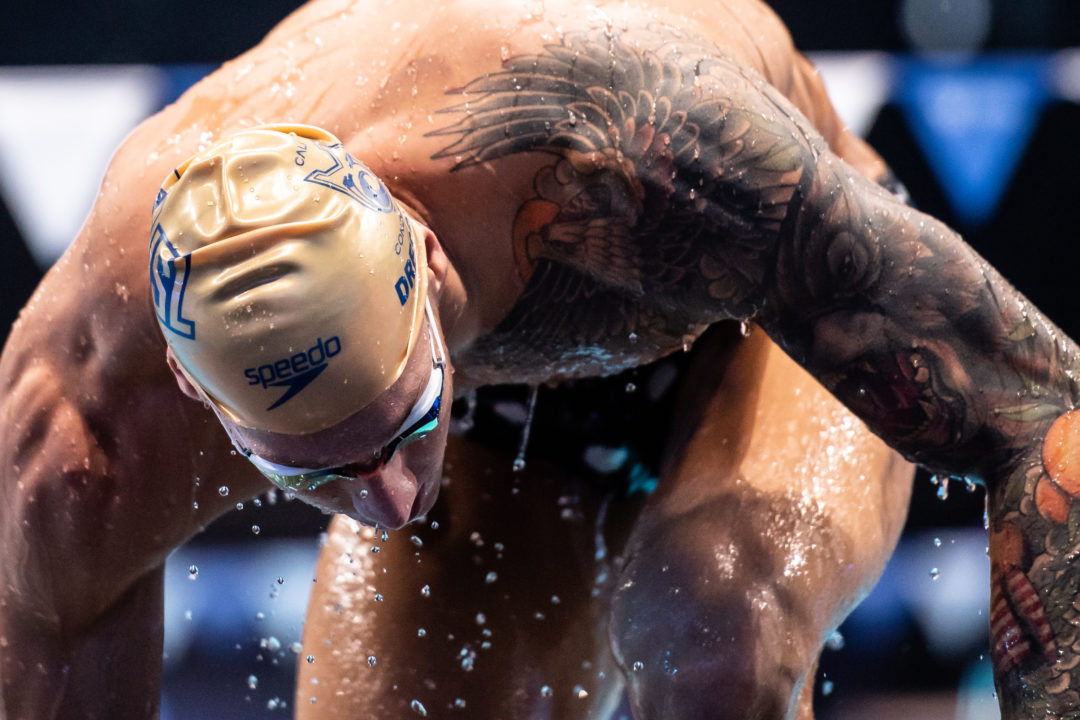 Caeleb Dressel and his Cali Condors will try to get a jump on the competition here on day 1 of the 2020 ISL Final in Budapest. Archive photo via Mike Lewis/Ola Vista Photography

The start lists are out for the season 2 final of the International Swimming League (ISL), which means claims have been staked by the Cali Condors, London Roar, LA Current and defending champions Energy Standard.

In addition to relay magic opportunities, CAC superstar Caeleb Dressel is entered in the 100m fly and 50m free for this day 1, which is the same schedule for last year’s MVP Sarah Sjostrom of Energy Standard.

Joining Sjostrom in the 100m fly tonight will be ENS teammate Anastasiya Shkurdai, with the Belarusian national record holder getting the nod over Maddy Banic in the individual event. Banic will be relay only tonight.

London’s versatile Duncan Scott could have been entered in any number of events but is listed for the 50m free only, plus relays. Scott’s absence in the 200m IM is counteracted by LON’s entries of Vini Lanza and Andreas Vazaios.

Scott’s compatriot James Guy is in the same boat with just the 400m free individual event plus relays.

As for big man Florent Manaudou, the French Olympic champion will be racing the 50m free as his sole individual event. London’s Freya Anderson is her squad’s entry in the 50m free, along with Mariia Kameneva, which leaves Anna Hopkin out of the event.

Of note, London’s Guilherme Guido is out of the individual 50m back for today. London has entered Luke Greenbank and Christian Diener, most likely giving Guido the extra firing power for Roar’s medley relay.

Below are the relay only swimmers for each squad for day 1:

Some studs just relays only swimmers

Guido not swimming 50 back surprises me

They’re going all in on the medley relay.

I didn’t realise Nakamura was only there for the semi final. Hardly seems worth it. Roar must be keeping Scott out of the 200 IM to maximise their chances in the relays and they’ve also kept Guido out of the 50 back.

Nakamura returned to his native nation for the 2020 Japan Swim. But I think the lengths he went to for the chance to swim in the ISL even for such short a time speaks to how much the opportunity means to swimmers worldwide.