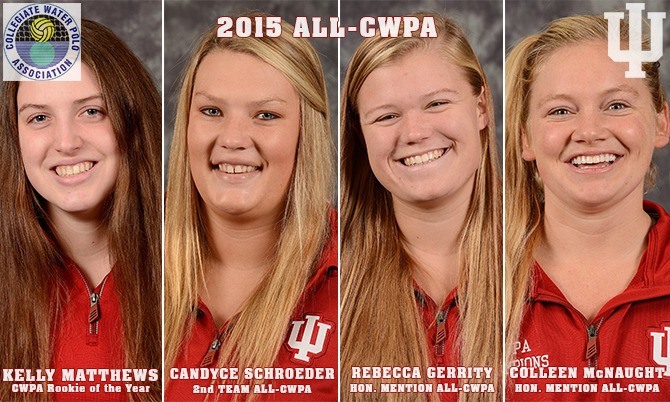 Matthews netted 73 goals and served 24 assists in her debut season with the Hoosiers. Matthews led all Hoosiers in scoring in the 2015 season, scoring three or more goals in 14 of her 34 appearances. In addition to a Second Team All-CWPA selection and the CWPA Rookie of the Year award, Matthews’ first year accolades include three consecutive CWPA Rookie of the Week honors (April 6, April 13, April 20) and the All-CWPA Tournament Rookie of the Year Award.

Schroeder scored 56 goals and served 27 assists for the Hoosiers in 2015. She adds her 2015 All-CWPA second team selection to a 2014 All-CWPA second team selection, a CWPA Player of the Week honor (February 2, 2015), and a selection to the 2015 All-CWPA Tournament first team. Schroeder (108 career goals, 52 career assists) will be the top-returning scorer for the Hoosiers in the 2015-16 season.

Gerrity received honorable mention All-CWPA honors after posting 40 goals and 35 assists in 2015. In three seasons with the Cream & Crimson, Gerrity scored 120 goals and served 68 assists. This is Gerrity’s third consecutive All-CWPA selection after receiving second team honors in 2013 and first team honors in 2014, in addition to her first team All-CWPA Tournament selection in 2014. Gerrity was also the CWPA Player of the Week for the week of February 9, 2015.