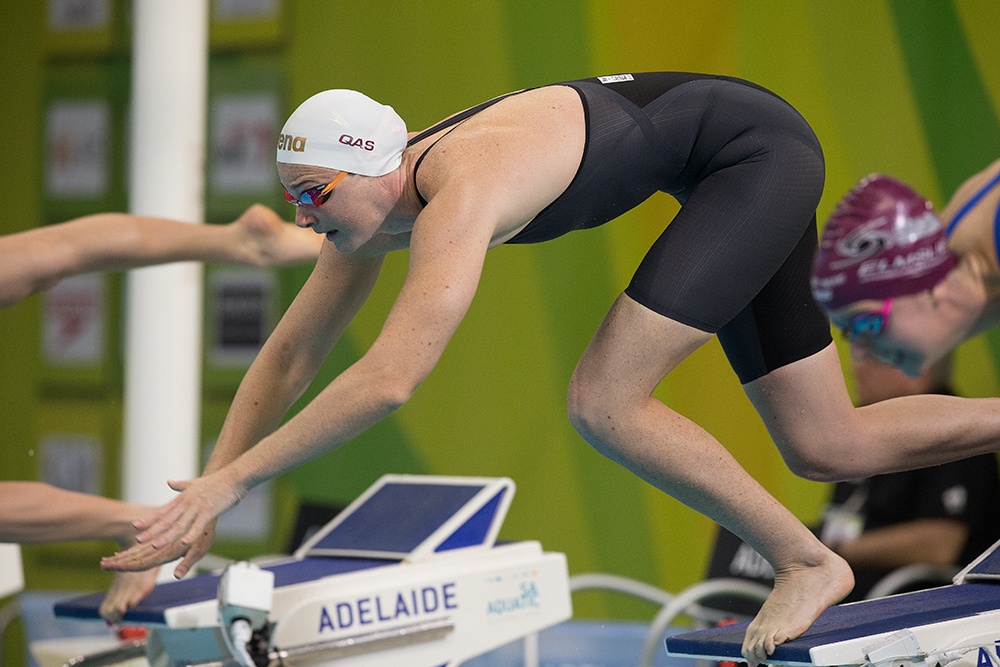 After the race, C1 couldn’t contain her excitement, stating about herself,”She’s back!”

The Commercial club swimmer continued, “And it’s exciting, it’s great to be swimming fast. I’ve put together some really good solid weeks of training and I’ve really been working hard. It’s great to see it’s really starting to pay off.

“There were a couple of times (when) I came back into training and I was thinking ‘oh man it’s a long way back.’

“But the body remembers and I’ve been doing this for a long time and taking a year off this year is the best thing I’ve ever done.

“I’ve come back refreshed and I’ve got a new love for the sport, a new perspective and I’m more motivated than ever for the Commonwealth Games.

“Sarah Sjostrom (Sweden) is swimming incredibly fast and watching her in Budapest, I was very pleased I didn’t gave to line up behind the blocks and race her then, but I’m now feeling a little better about the possibility of racing her in the future again now.

“She broke this world record just a couple of months ago and I was in that race and I was swimming next to her and I breathed and I saw her feet and it was a little demoralising.

“But it’s very motivating at the same time and I’ve been very motivated to get back in and give swimming 100 percent – I don’t feel I’m done with it yet.”

Campbell also won the women’s 50m butterfly final, which was contested in the morning session.

Awesome power. 96 SR down to 90 SR on the final 25. No other woman can swim that fast with that slow of SR. I love the way she keeps her head down on the breakouts. She can get away with 13 breaths SC because of the turns…but if she breathes more in the 100 LC, she will be a force to reckon with.

She stays very high in the water.

Wow, that looked easy and she coasted into her first turn. She lost some speed and could have been under 50!

The long, “relaxed” and powerful stroke, coupled with the thunder kick, reminds me of Matt Biondi and even more of Popov. Amazing.

I would take about that many strokes… in yards instead of meters… and go much slower… and I’m a 6’2″ male.

Much respect for Ms. Campbell, but why is she this fast in October? Swimming this fast is hard on the body and suggests she is tapered and near peak condition, something that cannot be replicated too often.

Mikeh – October in Australia is a national championship meet…different schedules call for different cycles. It’s 6 months until the Commonwealth Games. This is a similar timing to an American swimmer being fast at Winter Nationals. Seems reasonable to me.

Thank you for that info Braden

If you saw her interviews pre and post race she definitely isn’t in peak condition yet. So come the CG trials / CG if she qualifies it’ll be interesting to see what times she gets.

Difference there was it was one month out from the OG. She broke this one like she did when she broke it in 2015, months before she broke the LCM 100m free record.

AUS SC Nationals (and Braden is correct in stating these ARE a Natl Titles) have been held at this time of year for several years.

Also, like SS, C1 has also shown a tendency to be fast “in season” over the past 4 years.

And neither C1 or SS swam their fastest in the 100 free when it mattered most at Rio and Budapest. Manuel clipped them both times.

True, but SS returned serve in the 50 in Budapest so its not all one way.

As for C1, we’ll know more this time next year whether she’s irreparably scarred when it comes to big time racing or whether she may still be a legitimate racing factor.

Am making no predictions either way

Wow! Cate exploded out of her turns! Amazing times for 2nd and 3rd place, but they were not even close to Cate.

I think she said yesterday SC doesn’t suit her tall body because the wall appear just as she is getting her speed up! Not doing too bad….I want her to jump in a LC pool today!

I’ve said it so many times, but I’ll say it again. Cate Campbell is the single most talented female sprinter I’ve ever seen. She looked like she was swimming a 200 free up to 75m – Her stroke epitomises efficiency; Distance covered per stroke is insane, her kick just does not faulter in the slightest, her hips stay high. Even her turns are pretty good for such a tall woman. If this woman never wins an Individual Olympic gold, it will be a travesty.