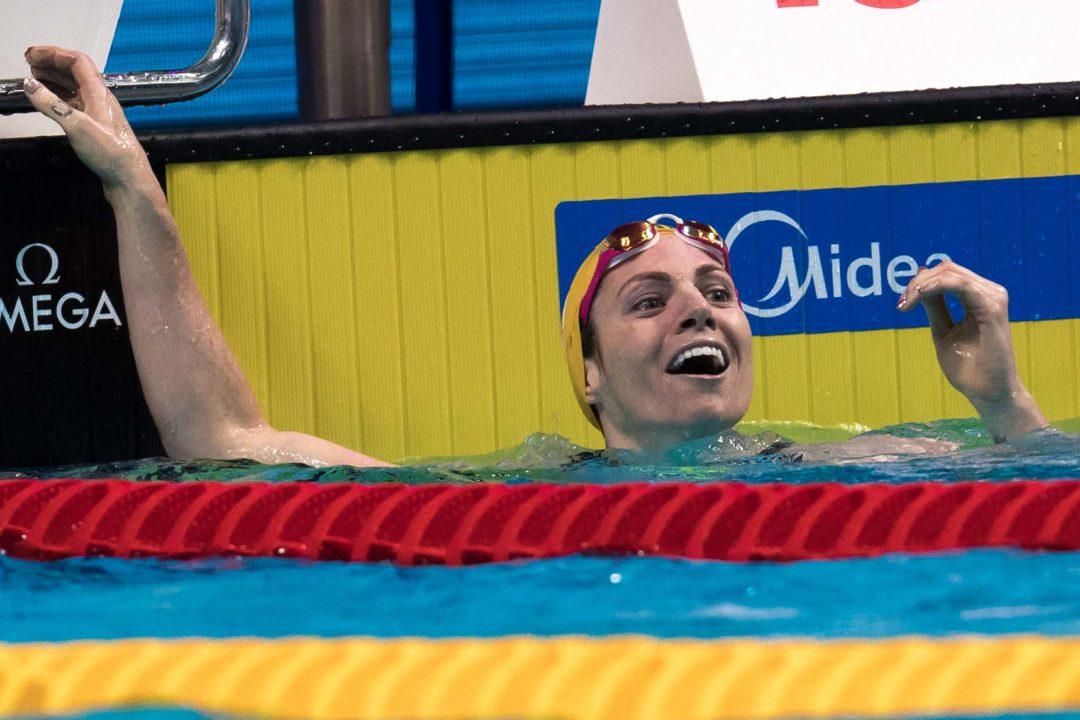 The Aussies continuue to put on a show in Adelaide, with Cate Campbell firing off another Australian NR, while Emily Seebohm earned her 25th short course national title. Archive photo via Mike Lewis/Ola Vista Photography

After firing off a new World Record in the women’s 100m freestyle last night, Cate Campbell blasted a new Commonwealth, All Comers and Australian National Record in the 50m freestyle on night 2. Clocking 23.19, C1 wasted the talented field, which included World Championships swimmer Shayna Jack and younger sister Bronte Campbell who touched in respective times of 24.01 and 24.08 for silver and bronze. You can read more about Cate’s history-making 50m freestyle race here.

17-year-old Atherton, the reigning World Junior Record holder in the 50 LCM back, notched a silver medal-garnering effort tonight of 57.07, with 16-year-old World Championships swimmer Kaylee McKeown right behind in 57.11.

Travis Mahoney of Marion Swimming Club dueled with visiting Japanese swimmer, 2016 Olympic bronze medalist Daiya Seto, across 2 events during tonight’s session. Mahoney got the best of Seto in the men’s 200 backstroke, where the 28-year-old earned a mark of 1:52.54 to Seto’s 2nd place finish of 1:53.93.

The opposite result transpired in the 200m IM, however, with 23-year-old Seto easily leading the way to the top of the podium in a winning time of 1:53.33. Mahoney finished almost 2 seconds later, settling for silver in 1:55.28.

Bronze medalist here in Adelaide behind the Campbell sisters in last night’s 100m free, Emma McKeon, established herself as the runaway favorite to win the 100m butterfly during this morning’s prelims, cranking out a solid mark of 57.48. The Griffith University athlete followed that up with a super speedy 56.79 to take the title, representing the only swimmer to dip under the 57-second threshold. McKeon’s personal best rests at the 56.21 she set as a 20-year-old at the 2014 edition of this same meet to win that year’s national title.

Runner-up behind McKeon was Olympic teammate Brianna Throssell, the 200m fly specialist from West Australia. In this sprint race, Throssell registered a mark of 57.11 to earn silver. Throssell later contributed to her club’s winning 4x200m freestyle relay, clocking a 2nd leg split of 1:58.89.

22-year-old Spartan swimmer Mikkayla Sheridan cranked out a commanding win in the women’s 400m freestyle, beating out Olympian Madi Wilson in the process. Typically a backstroker, Wilson has been focusing on freestyle over the World Cup Series this season and managed to record a 4:04.54 to finish behind Sheridan’s winning effort of 4:02.00. For Sheridan, the time tonight checks-in as the 22-year-old Spartan swimmer’s personal best. Open water swimmer Kiah Melverton finished 3rd in the race in 4:05.33.