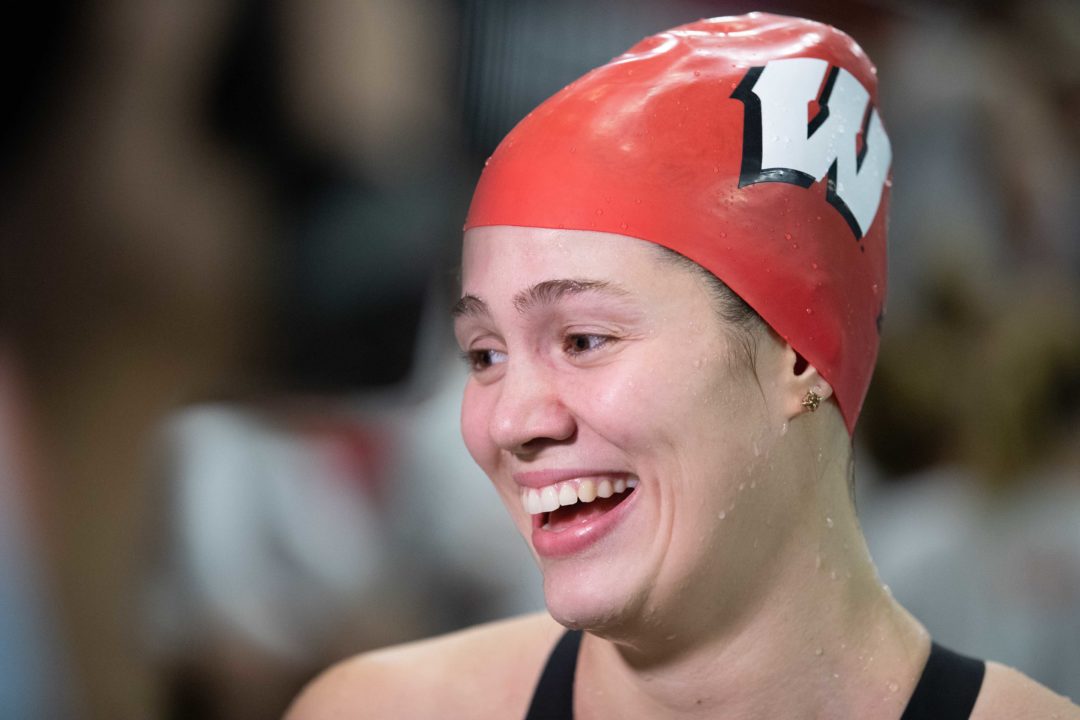 After the fastest time in history had been lowered by mere hundredths of a second the last three times it was improved upon, Wisconsin’s Beata Nelson obliterated the 100 back American, NCAA, and US Open record at the 2019 Women’s Division I NCAA Championships Friday night, going 49.18.

Nelson won the race by three-quarters of a second, splitting 23.76/25.42. Taking second was Cal’s Amy Bilquist in 50.05, making her the 1oth-fastest performer in history, and in third was Stanford’s Taylor Ruck in 50.34.

Watch the race, courtesy of Wisconsin Athletics, below:

Seventeen-year-old Regan Smith set the American record just 12 days ago at 49.66, meaning Nelson took off .48 seconds. Nelson cruised to a 50.07 in prelims Friday and looked primed for the record, especially given her stunning 200 IM performance (1:50.79) Thursday night.

Nelson had previously set the American record earlier this season when she went 49.67 at the Texas Hall of Fame Invite in November. She now owns five of the top 100 back swims in history.

Wow, USA womens backstroke is stacked!! – going to be so difficult to be top 2 at trials!! – Go Beata!!

I’m going to go ahead and throw this one out there I’m willing to bet Amy makes the Olympic team in 2020 if she continues, which I hope she does!. Her walls are not the best in the world but if you watch the in between‘s she catches up every time. Her wingspanned in power that she has I believe she has an amazing shot of making the team in the hundred next year.

Oooh. Things like this bring out miracles in other competitors. Thanks!