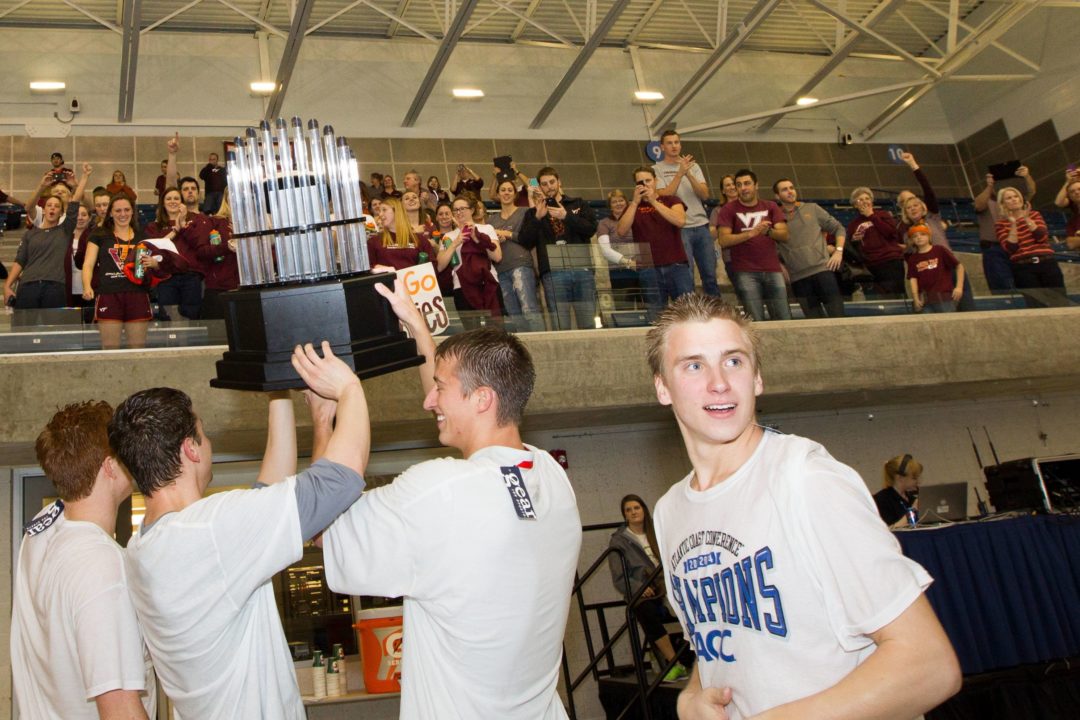 The Virginia Tech men are on early track to repeat at ACC Championships with an impressive diving performance. Archive photo via Tim Binning/TheSwimPictures.com

While the swimming portion of the 2015 ACC Men’s Swimming & Diving Championships don’t begin until Wednesday in Atlanta, the diving portion was completed last meet in conjunction with the women’s swimming & diving meet, meaning that there are already scores on the board.

Last year’s ACC Champions from Virginia Tech have once again led the conference in diving points, just as they did last season when they fought off the North Carolina State team at the end of the swimming portion of the meet in what was a great finish.

This season, the Virginia Tech divers might’ve expected a narrower gap, with All-American Ryan Hawkins graduating, but in reality, they’ve actually scored a significant number more (47 points) from diving than they did last year.

Meanwhile, the 23 points that North Carolina State scored last year has gone to 0 – they didn’t use any divers at this year’s meet. While that frees up more roster spots for swimmers (23 points for a roster spot is possible to make up, even for the last guy on the roster, when C Finals are scored), the gap between those two teams coming into the meet has grown from 182 a year ago to 247 this year. With last year’s meet having been decided by 38.5 points, and the Hokies losing very little of their swimming core (transfer Joe Bonk is the biggest one) to graduation, they are in very good shape heading toward ACC’s.

The really interesting result from diving, though, is the number of points scored by the UNC men, which is probably the most they’ve ever scored (a shallow stat, based on the recent C-Final scoring addition). But the 194 points are almost double the 98 they scored at last year’s championship. While Virginia also fared better in diving, the tables have flipped on their rivalry battle with Virginia in that regard.

Great job by the VT Divers but don’t understand why they don’t dive during the men’s portion of the ACC championships. It seems they get shortchanged from the team aspect. Must be good reason but have never heard why. Go Hokies!!!

If only NC State had the great John Candler…