On the Outside Looking In: Race in Swimming 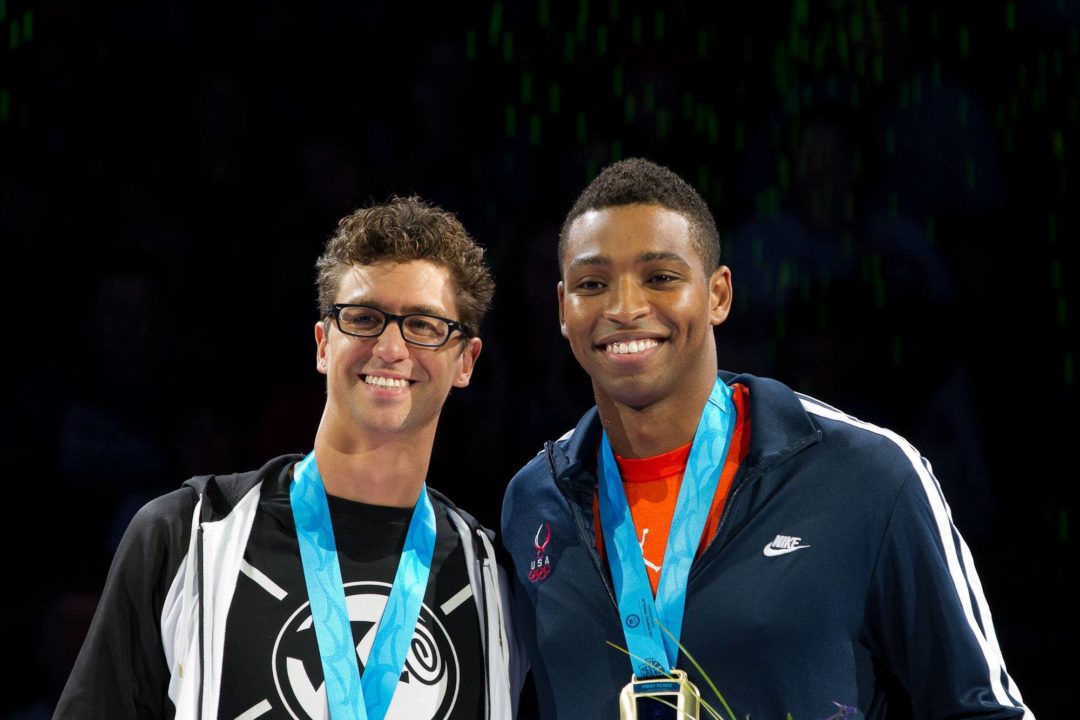 This opinion piece is courtesy of Franco Pacheco. There is a moment when an athlete or coach walks onto a... Current photo via Tim Binning/TheSwimPictures.com

This opinion piece is courtesy of Franco Pacheco.

There is a moment when an athlete or coach walks onto a pool deck for a big meet and awe and anticipation set in. It’s the smell of chlorine, it’s the movement of the water, its electricity in the air. Ask any swimmer and they can tell you they have experienced it. In that moment you feel part of something bigger. It is a moment where your focus should be on your team, your events, and the payoff. I have personally experienced the moment and it’s magic. If you are a Black (not African-American as it does not account for individuals with other countries of original origin) or Latino athlete or coach however, that moment can come with a whole additional level of stress. How many songs will the warm-up soundtrack play that have racial epithets laced in? How many people will walk up to you and ask if you are lost or need help with directions around the athletic facility? While your team is feeling like a part of something larger, how many times can you be reminded that you are an outsider looking in?

In 2010, the USA Swimming Foundation and the University of Memphis released a study of diversity in swimming. This study found that around 60% – 70% of Black and Hispanic/Latino children in the United States can’t swim. Taking that to the next level, less than 10% of both demographics combined ever compete in the sport. The study shown that even with reassurance of being on a team and having the resources to learn, minorities routinely responded that they would not be successful in the sport. Furthermore, if you look to leadership by example at the collegiate coaching level, the Institute for Diversity and Ethics In Sport at the University of Central Florida found that Caucasians made up 85% of the head coaching ranks. That number is for all collegiate sports and while the institute does not release swimming specific data, demographic information points to an even lower percentage on pool decks. Those are just numbers. The more human element isn’t just statistics, it is small moments where you feel you don’t belong.

These reminders go far beyond just meets and infiltrate the swimming environment. Given swimming’s demographics, there is a reality that many of your teammates and athletes will not have a large amount of exposure to minorities on a personal level. This can lead to difficult interactions. Even the best intended moments can cause unseen segregation and unease. During my career, I cannot list how many times I voiced my discomfort over a song or topic only to hear in response something ranging anywhere from the lines of “I didn’t realize you were Latino, you can pass for white” or “don’t worry, racism in American doesn’t exist anymore.” After those remarks are made, usually an attempt of solidarity is made, something like “my nanny was Latino or I volunteered once at black youth program” and still worse, “I am cool with that because I listen to Lil’ Wayne or Pitbull.” Those small facts fail to speak to understanding. More recently, there is a common statement that “we have a black president and Cullen Jones is on the Olympic team.” Both facts are true, but they distract from the larger picture. Those are accomplishments for both gentlemen and I acknowledge that the work that Cullen Jones does for diversity in swimming is incredible, but the recognition of their success and their acceptance into mainstream is not a minority achievement. More than anything, the constant return to those names is a self-congratulatory act of the Caucasian consciousness in the vein of, “Hey look! We are finally ready.” It’s a novel idea, but using it common conversation is not the be-all-end-all and it often only serves to make things worse.

Race is always going to be a difficult discussion. It permeates almost everything and often, we celebrate the integration of sports and heroes that gave minorities the opportunities to meet on an equal playing field. To be open about it is the only way to promote growth and development. However, in preparation for this article, I reached out to five different coaches of color in swimming and universally, this topic was one that they all had a keen desire to avoid. Be it concerns over job stability, program image, or just not responding to e-mails and calls, the situation played out the same. This topic is a no-fly zone and to discuss it in the world of swimming is dangerous. However, I believe it is important and vital. In the world of sports, swimming is one of the least integrated. There are a number of reasons ranging from the economic to cultural and it can be argued that this is a symptom of a larger American issue. It also can be argued that the world of swimming just hasn’t done enough.

The first Hispanic Heritage oriented swim meet did not happen until 2011. USA swimming did not conduct a diversity study until 2010 and hosted its first Diversity Select camp in 2011. Baseball and Football have hosted diversity-oriented camps since the 1970’s and while swimming isn’t the worst in the trend, it is very close to the bottom. There is no accessible association of minority coaches on the college level (unless you count the enigmatic Advocates for Athletic Excellence), much less in the in the world of college swimming and diving. We, as a community, as behind the times and it is isn’t something new or surprising to existing minority athletes. In fact, the slow reaction and delayed response of the larger community can actually be even more alienating.

That being said, there is hope. Cullen Jones and Anthony Ervin are pillars of the sport and both are doing amazing things for awareness. The media presence of Jones and his work with the “Make a Splash” initiative are inspiring and game changing and Ervin’s re-emergence and racial openness bring positive attention.

Editor Note: Cullen Jones is no longer a “Make a Splash” Ambassador.  He now runs his own campaign for diversity in sport and hosts the annual Cullen Jones Diversity Invitational (swim meet) Sponsored by Speedo.

USA Swimming, at least, has acknowledged there is a problem and is slowly adjusting. Even with this small and brief article that I have been blessed with the opportunity to write I strive to raise awareness among all athletes of every race. As minority swimmers and coaches it has never been more important to recognize we have a voice and to use our voice to offer encouragement to the next generation of athletes that may feel like a visitor in our world.

To that next generation, I speak to you directly. Have faith that you aren’t alone. While it may be hard to see at first, Blacks and Latinos do exist in the world of swimming and we are quite successful. Know that things will get better and even when it feels like you are on the outside; you aren’t. Your team appreciates you and, in the larger picture, you are part of something greater and incredibly special. Every best time, top place, and even your resilience to reign in expectation and deal with ignorance are huge steps in our overall progress in the sport. Realize that this isn’t an us-against-them doctrine but rather us working with everyone towards one goal. In your lifetime, the numbers listed at the open of the article will change. Stay with it and keep loving the grind because, with the more of us that are here, the less we can be ignored. To borrow from Mahatma Gandhi…

“Be the change you wish to see in the world.”

Franco Pacheco is in his third year as a swim coach at Colby. He swam at the College of Saint Rose as a distance swimmer and has the dubious honor of being the only swimmer in program history to compete in every event possible in the dual meet line-up (including diving) over four years. After college, he went to graduate school at Chaminade University in Hawaii and majored in Educational Psychology while minoring in surfing. Once he got his fill of sun and waves, he joined the United States Army and served with the 742nd before receiving his honorable discharge in 2011. As a newly minted Veteran, Franco has followed his true passion and began coaching at the college level. He recently graduated from Saint Joseph College with an M.S.Ed and is working on his M.B.A. at Thomas College.

Franco: You touched my heart with this article. Your Bio should include “Franco participated on the most Diverse swim team in Monterey County, Ca for 12 years, before going off to college”. I’m asked regularly twenty years later why I still coach high school swimming? For most of these kiddos it is affordable and the only opportunity they will have in their childhood to swim on a Team. Diversity in swimming is in high school swimming. The greater question is why doesn’t it generalize to the Club, year round level? This isn’t just a good Essay, it is Invigorating and I hope revitalizes the discussion of not just Diversity in the Swimming ranks, but more importantly Diversity in Coaching in… Read more »

Excellent article. My daughter’s team is very diverse and I am happy about that. She is tall for her age so we are stil dealing with the “don’t you play basketball” comments.

The issue of race is swimming is complicated as you point out. However, governing bodies & teams must understand that the demographis in the US demand that the sport & teams diversify or slowly die. Diversity is in the form of race, economics, ethnicity, and education. Thank you.

I just want to say Elvis looks very good in his Funky Trunks & could we please have some more pics. I am very keen on diversity in swim trunks.

You other Boys at least get a tan.

Hey Coach. Thank you for writing this. It puts things in perspective. I never really think too much about race in the context of swimming. Btw I love reading your articles.

Thank you for reading the support. I will keep writing as long as they let me!

Great article. There are great opportunities for USA Swimming to get involved with promoting diversity in the sport. Whether or not they are taking these opportunities seriously is another question.

I agree totally. The hope that with a more informed community, we can push it in the right direction.

Thank you for the comment and thank you very much for reading.