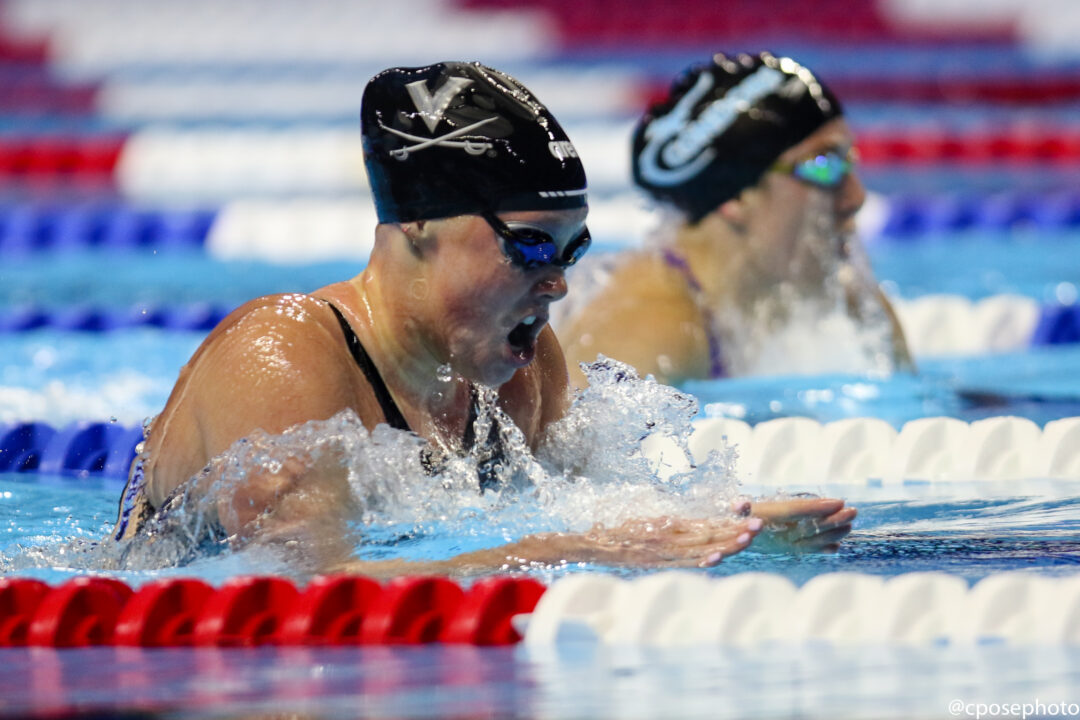 48-point NCAA Championship scorer Ella Nelson will serve as a captain for the Virginia Cavaliers this season as they look to defend their national title. Archive photo via Tyler Fenwick

Miguel Rojas Newman helped Bolles win their 2021 State Championship as he won two individual events at the state meet. He will join the Hokies in fall 2022.

The University of Virginia has announced 7 captains for the 2021-2022 swimming & diving season. A group of 4 male swimmers and 3 female swimmers will lead the Cavaliers into the new season, where the women’s team will carry an even more powerful roster into their NCAA title defense.

Nava, Wenger, and Storch all return as second year captains. The team’s other four captains from last season all graduated.

Nava, the defending ACC Champion in the 200 fly, didn’t come to Virginia with the same credentials as some of her co-captains, but has developed into a contributor none-the-less. Her best 200 fly time pre-college was a 1:58.24, which she has now improved to a 1:54.36.

She also delivered one of the best quotes of the season after winning that ACC title:

“This event absolutely terrifies me and my goal for this morning was to not cry.”

Virginia’s team votes on captains, with the coaching staff having the final say.

The Virginia women won the first NCAA title in program (or ACC conference) history last season via a dominant 137-point margin over runners-up and conference rivals NC State. The Virginia men finished in 9th place, which was their highest finish since placing 8th in 2011.

The Virginia women are bringing in a dynamite class that includes the Olympic silver medalist in the 400 IM Emma Weyant, plus Olympic Trials finalist Gretchen Walsh (younger sister of last year’s star freshman Alex Walsh), among others. While the team graduated 2021 NCAA 200-500-1650 free champion Paige Madden, and while Stanford has also brought in a loaded class, that makes the Cavaliers heavy favorites to repeat as title winners this year.

The Virginia men brought in the #6-ranked class in the country, which include immediate impact contributors Jack Aikins and Max Iida, as well as a few others who could make an NCAA roster as rookies. The big boost, though, comes from the incoming transfer of Matt King, who as a freshman at Alabama last season had one of the fastest freshman sprint seasons in history.

With King and fellow sophomore Matthew Brownstead on board, the Virginia men also have the firepower to continue climbing the national rankings.

The Cavaliers are a rarity among top-15 teams in the NCAA: they don’t have any student-athletes who took advantage of the NCAA’s waiver allowing those who competed in the COVID-impacted 2020-2021 season to use an extra season of eligibility. They did bring one in, though: former Harvard swimmer Jaycee Yegher, who transferred in for her 5th year. That means only one 5th year senior (who, for this year, don’t impact scholarship limits).

The Cavaliers begin their season on October 30th when they host Army.

Pretty certain that UVA is going to Cal-Berkeley for its first meet from Oct 15-16. Should be lots of fun!

Jaycee Yegher is a grad student on the team using her extra covid year eligibility.