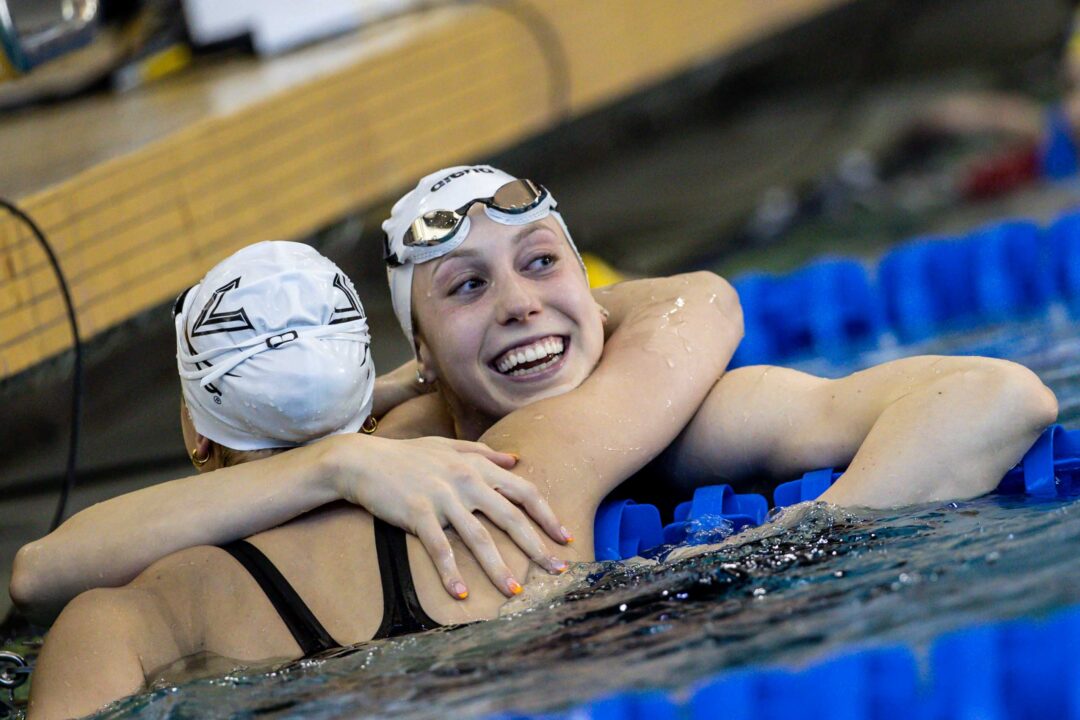 Interestingly enough, two of the splits on tonight’s relay were the exact same as Cal’s. Virginia’s third leg Reilly Tiltmann swam the same time as Izzy Ivey who led off for Cal in a 47.79. Kate Douglass of Virginia led off in a 46.62, the same exact time that Katie McLaughlin swam for Cal on their second leg.

The consistency in the two relays continued as Alex Walsh swam a 46.49 for Virginia tonight on the second leg which was 0.01 slower than Amy Bilquist swam as Bilquist swam the third leg for Cal in a 46.68.

The biggest difference (although not much) was the anchor legs. Abbey Weitzeil swam a 46.07 for Cal, and Virginia’s Gretchen Walsh split a 46.01 tonight.

Notably, none of the four are seniors so the same relay has the potential to swim again next year.

The symmetry of those splits is amazing.

Breaking the record because you outsplit Weitzeil has the same energy as the US men breaking the medley relay WR in Tokyo by outsplitting Phelps.

Who will Virginia’s breastroker be next year?

Alex Walsh. She will take it out faster than 27.9

or Todd & Company just develop someone else…..

Lexi Cuomo is more than adequate in fly – with Douglass free. Or vice versa.

Anna Keating had a good meet

Reilly Tiltmann really stepped up to the challenge for that relay. So proud of her!

It’s gonna be really interesting to see how the 100 free goes at US trials this year. Surely the talent exists to produce the best American 4×100 free team ever.

Who was on that team? Simone, Weitzel?

Agreed. This is not based on anything other than a hunch, but feel like there’ll be an entire heat and a half worth of women that could go 52.7ish if everything breaks the right way.

So that’s it then? No more Cal records?
Ivey was 4 months out of graduating HS. I was so proud of her being a part of that.
Hey — they all gotta fall sometime.
Congrats Virginia. Really amazing what your team has accomplished.

It’s so heartbreaking to see this record fall. That Baker/Bilquist/McLaughlin/Weitzeil core was special, and Ivey adding onto it after Baker turned pro just felt like “Cal back at it again for another couple years.” But as you said, records are made to be broken and it took an equally, if not more, talented quartet to take down an amazing relay. It is so crazy how fast this sport has gotten. I know Cal is currently struggling to keep pace with Virginia, but I’m optimistic that they will be back.

Wenger should be eligible for 5th year?

I wish! She definitely could but she has said she won’t be coming back. This was her last meet.

wonder if AWalsh will be stepping up as breaststroke leg? Douglass on fly, GWalsh free and Tiltmann back?

Jaycee Yeagher, Emma Weber (59.0 in HS), and Zoe Skirboll (who has Douglass/Walsh style versatility) for next season.

Stanford needs to find more Lexi Cuomos and Reily Tiltmanns: swimmers who are not the mega-stars, but who will still chip in a big leg on a relay and score 10-20 points.

Um, Tiltmann is no role player. She had two A-finals and a 9th place from her 3 indv swims. I.e. exactly the same as Huske and similar to Maggie Mac.

^^^^^^^
37 individual points for Reilly, which is more than Ruck in the exact event lineup, and similar to Huske and Maggie. And she has three full years left.
She might not get the attention of others yet, but she is a STUD.