USA Swimming’s Protest of Lilly King DQ Denied, Will Be Heard by Jury of Appeal 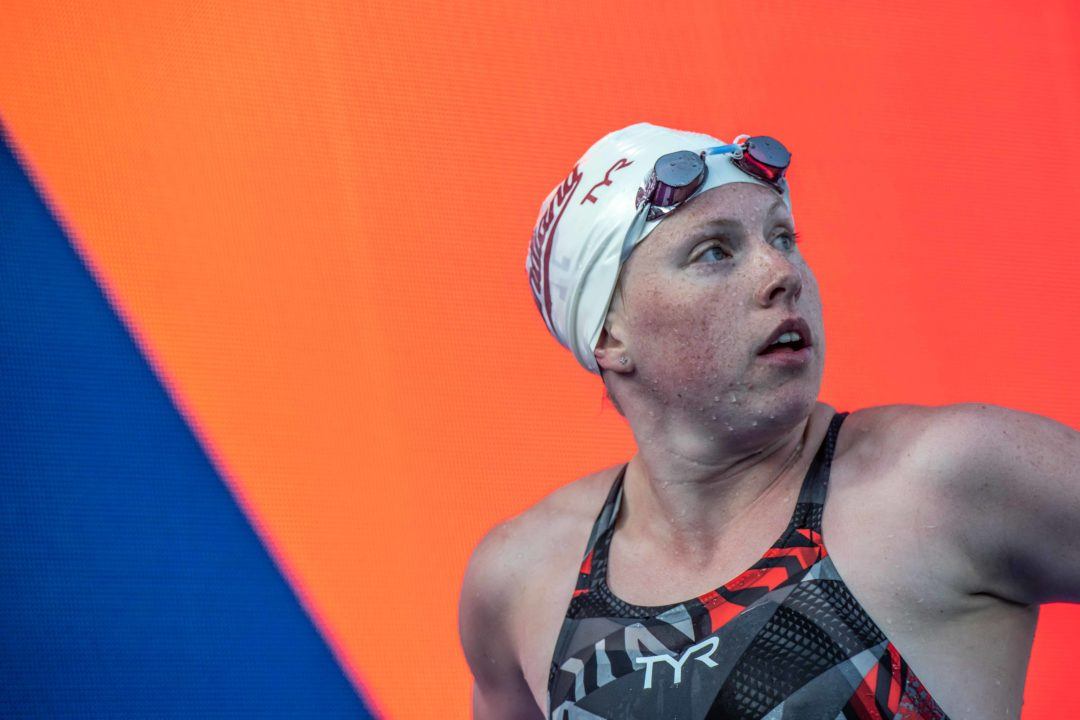 Olympian King was called for a "non-simultaneous touch" on her first turn and USA Swimming is going deep into the appeal process over it. Archive photo via Mike Lewis/Ola Vista Photography

American breaststroke star Lilly King was disqualified in the third heat of the 200 breast Thursday morning in Gwangju, and nearly two-and-a-half hours later, we’ve received word that USA Swimming’s protest of the decision will be heard by the Jury of Appeal before the next session begins at 8 p.m. local time Thursday.

King won the prelims heat, then turned at the scoreboard and reacted with shock upon seeing the DQ. According to the Italian broadcast, she walked to the officials’ table to protest, and was turned away. King was apparently not given a reason for her DQ when she asked after her race.

USA Swimming also did not know what it was for until about 30 minutes after the race, when it was told that King did a “non-simultaneous touch” on her first turn.

As of 45 minutes after the race, the results were officially “under review,” and USA Swimming lodged an official appeal shortly thereafter. Video replay is in use at this meet to review DQs if necessary. It can only to overturn calls on swimmers who were DQ’d by an official on deck, not to make a DQ, and is done immediately upon relay of the official’s call: in some cases, even before the race is over.

According to a spokesperson for USA Swimming, that protest was denied. In this situation, per the FINA rulebook, a Team USA leader could appeal to the Jury of Appeal, which was done, and the case will be heard Thursday before finals.

Here’s the entire process for appeal, from FINA’s general rules:

In short: it goes to the entire Bureau. The 20-person technical committee makes a recommendation, and any Americans on the committee can speak but not vote; that means FINA VP Dale Neuburger and Technical Committee Chair Carol Zaleski cannot vote. The jury’s decision will be final.

The process was invoked in 2009 when United States open water swimmer Fran Crippen‘s finish approach in the 10k led to a disqualification and subsequent protest. That protest went to the Jury of Appeal and ultimately got the DQ overturned, awarding him the bronze medal.

King held the No. 3 time in the world heading into the meet, at 2:21.39 from May. The 22-year-old raced to a world title in the 100 breast, in which she is the world record holder and defending Olympic champion, Tuesday. American Micah Sumrall will represent the United States in the second semifinal after going 2:25.17 Thursday.

Incredibly unprofessional way to handle all of this @ FINA

How is following the rules unprofessional? What would be the professional way to handle this in your opinion?

That was a DQ? Was that Efimova’s mom on the turn? Half the FINA officials cant even see their feet. OMG

I hope she gets it overturned.

Don’t have a stance on whether DQ was correct or not, as there was no great angle i’ve seen, but the W200 Brst is much more interesting with her in it.

She did it at Rio as well, just didn’t get caught

Video proof or it didn’t happen

I love Lilly and I think this is stupid.

But I also love pissed off Lilly and this is weirdly exciting to me.

If it’s a DQ her meet is all but over.

I suppose she could drop a big swim in the relay, but other than that this is it.

She has the women’s medley relay and the 50 breast…

Based on her 100 BRST her chances of doing anything interesting on the 50 is pretty much 0.

Efimova should be life banned.

Me noticing that King’s speed isn’t where it has been in the past doesn’t make me an efimova fan.

exactly , so salty for a swim fan

Since you become by the best sprint breaststroker in the world?

wake up again ………maybe it will help u see clear …

Based on how they handled the Men’s 100 Back after they had wedgie issues, and the fact the crowd would go viciously anti-American as the 16th qualifier was SKorean and would thus be eliminated if the jury ruled Lily back in the race and the SKor athlete out, let Lily swim in lane 9 of one of the semi-finals.

I like Efimova too but my meldonium joke should have more upvotes c’mon swimswam.

I think by going to the bureau they are inserting politics into the decision. They should withdraw the appeal and accept the judges decision.

lol congratulations, that was the most stupid thing I’ve ever read on this forum

Think it was sarcastic.