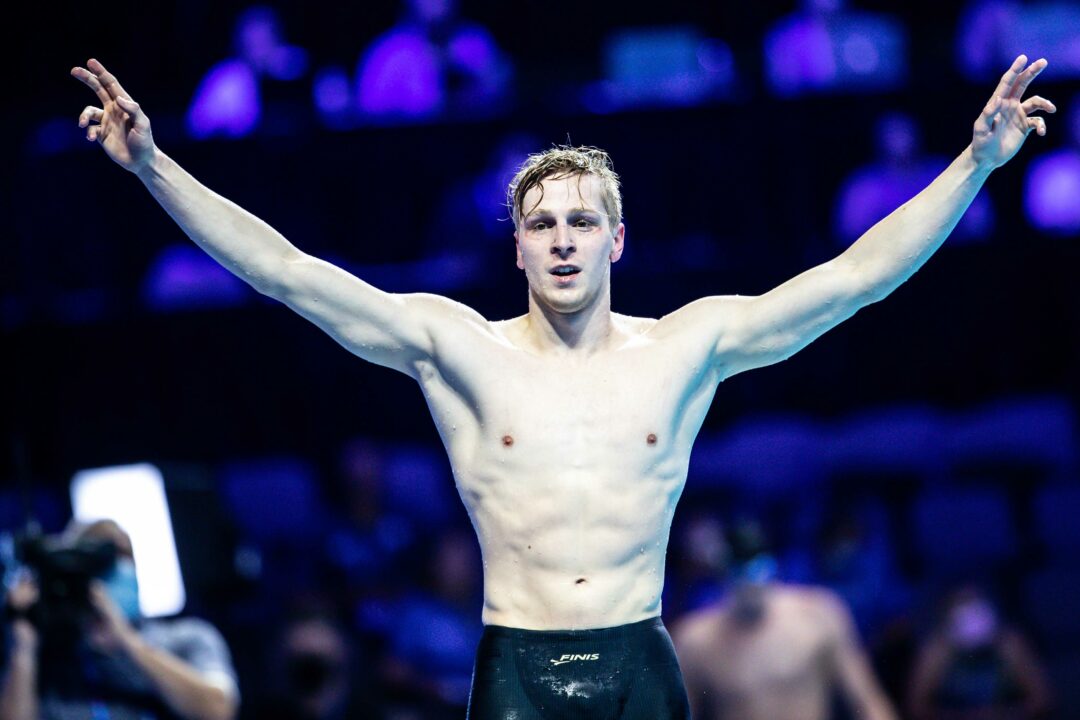 Zach Harting joins the U.S. roster for the Short Course World Championships after it was learned Carson Foster's qualifying time was from an ineligible event. Archive photo via Jack Spitser/Spitser Photography

USA Swimming has updated its roster for the 2022 Short Course World Championships, announcing Wednesday that Zach Harting will join the U.S. contingent heading to Melbourne to race the men’s 200 butterfly.

Harting gains an entry after FINA informed USA Swimming that one of the initial entrants, Carson Foster, was ineligible to race the 200 fly because his qualifying time was not done at a FINA-approved qualifying event.

USA Swimming selected its SC Worlds roster via long course times through the U.S. National Team, where Foster was the top-ranked swimmer in the men’s 200 fly after clocking 1:53.67 at the Speedo Southern Sectionals in Austin back in July. However, the competition is not FINA-approved for qualifying purposes, making him ineligible to race the event at Worlds under the FINA qualifying procedures.

Upon further review of the time standard requirements set for entrance into the FINA World Championships (25m), USA Swimming has determined that Carson Foster is not eligible to represent USA Swimming in the 200 Fly in Melbourne, and will be replaced by Zach Harting. Trenton Julian is also set to race the 200 Fly.

Carson Foster will still swim the 200 and 400 IM at FINA World Championships (25m). USA Swimming prides itself on accurate and fair selection procedures and takes full responsibility for this error. We look forward to having Zach and his leadership on the Short Course World Championship Team alongside Carson and the rest of this talented team.

The change does not effect the U.S. National Team roster.

As a result, Harting joins the U.S. squad as the fifth-fastest swimmer in the men’s 200 fly on the National Team, giving the event a complete overhaul compared to the original two swimmers entered when the roster was first announced.

Luca Urlando, who is ranked second behind Foster on the National Team in the 200 fly, was forced to withdraw from the competition after suffering a season-ending shoulder injury on the FINA World Cup circuit, which opened the door for Trenton Julian to be added to the team last week.

Julian was ranked third in the 200 fly, while fourth-ranked Gabriel Jett has seemingly declined his spot.

Foster will still swim the men’s 200 IM and 400 IM in Melbourne, having won silver and bronze in those events, respectively, at last year’s SC Worlds in Abu Dhabi.

For Harting, this will be his third straight appearance on the U.S. roster at SC Worlds. At the 2018 championships in Hangzhou, China, he finished fifth in the 200 fly, and last year in Abu Dhabi he placed 11th while also picking up a gold medal after swimming a prelim leg on the U.S. men’s 800 free relay.

With the addition of Harting, the U.S. roster is now at USA Swimming’s maximum of 16 men and 16 women.

The 2022 World Short Course Championships will be held from December 13-18 in Melbourne, Australia. At the 2021 edition in Abu Dhabi, the U.S. led the medal table with nine gold and 30 total medals won.

Watch Zach Harting pull a Tom Shields and not even final. Carson by default is the better decision regardless of who has the fastest seed time, he’s more reliable

And how did we just realize this on Nov. 29? Wouldn’t this be fundamental meet-entry 101 type of stuff? This is a terrible look for USAS. And Zach will fill the hole admirably – but it’s not fair for him either.

Show us on the globe where you made a Nat’l Team. Summer League World Championships don’t count either.

Trenton Julian does not belong anywhere near a pool deck, especially if there are minors.

He certainly does have a career cut out in the NFL, where they don’t care about these types of allegations whatsoever.

Nice to see Jake Foster on there for the 400 im, making a bro double a possibility

USA Swimming is also proud of allowing someone on the SafeSport list to represent the country.

Wonder why Jett turned it down….

Probably because of only having 2 weeks of notice?

Finals for Cal are during the meet as well.

I wish the announcement was saying Coleman Stewart and Beata Nelson were two new additions to the roster. Oh well ..wishful thinking.