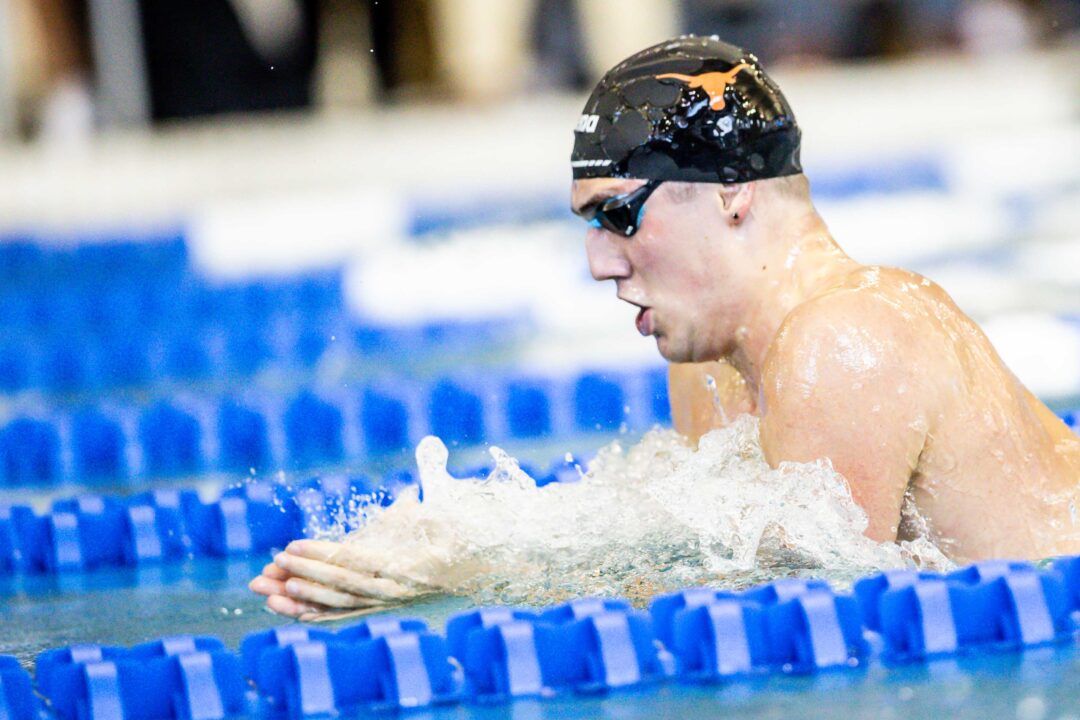 Texas will be without 2022 NCAA runner-up Caspar Corbeau at the Minnesota Invite this week as he prepares for the Short Course World Championships. Archive photo via Jack Spitser/Spitser Photography

The psych sheets for this week’s Minnesota Invite were released Tuesday, with several noteworthy names missing and some athletes opting to only race a select number of events.

The most notable absence is Texas senior Caspar Corbeau, which was expected as social media has indicated he’s in the Netherlands preparing to represent the Dutch team at the Short Course World Championships next month.

Corbeau was the NCAA runner-up last season in the 100 breast, placed sixth in the 200 breast, and was also a consolation finalist in the 200 IM.

At last year’s Minnesota Invite, Corbeau was Texas’ top scorer with 92 individual points, winning the men’s 100 and 200 breast while also taking second in the 200 IM.

On the women’s side, Cal is missing fifth-year Alicia Wilson, who entered the transfer portal in October, and Izzy Ivey remains out of action. Ivey posted on Instagram Tuesday showing that she and Wilson have graduated and added “here’s to the next chapter.”

No Matthew Chai for Cal?

Not expecting Stadden or Luther to go fast. They are in for SC worlds taper

Neither one are on teams that swim beat down in season. Even if SC worlds is a bigger focus they’ll still be fast.

Swimming Prelims begin at 10:00am

Same for those against Destin Lasco, the reigning NCAA champion in 200 back, seeded with a NT.

Not sure why all the NT entries.

Foster in 500 will be fun to watch

If Foster swims the 500, you’d think he’d be 4:07 at worse, which is unbelievable. It’ll be interesting to see how much he drops from his practice swim to a big mid season meet racing Hobson.

Smith, McGahey, and Sates have been 4:07 or faster. Maybe I’m missing someone but he could be in the top 3-4 all time after tomorrow.

I mean it is a mid season meet…

Grothe has been 4:07 as well. Don’t remember the hundredths

Will probably switch on that link when the meet goes live.

Yes, this is what usually happens.