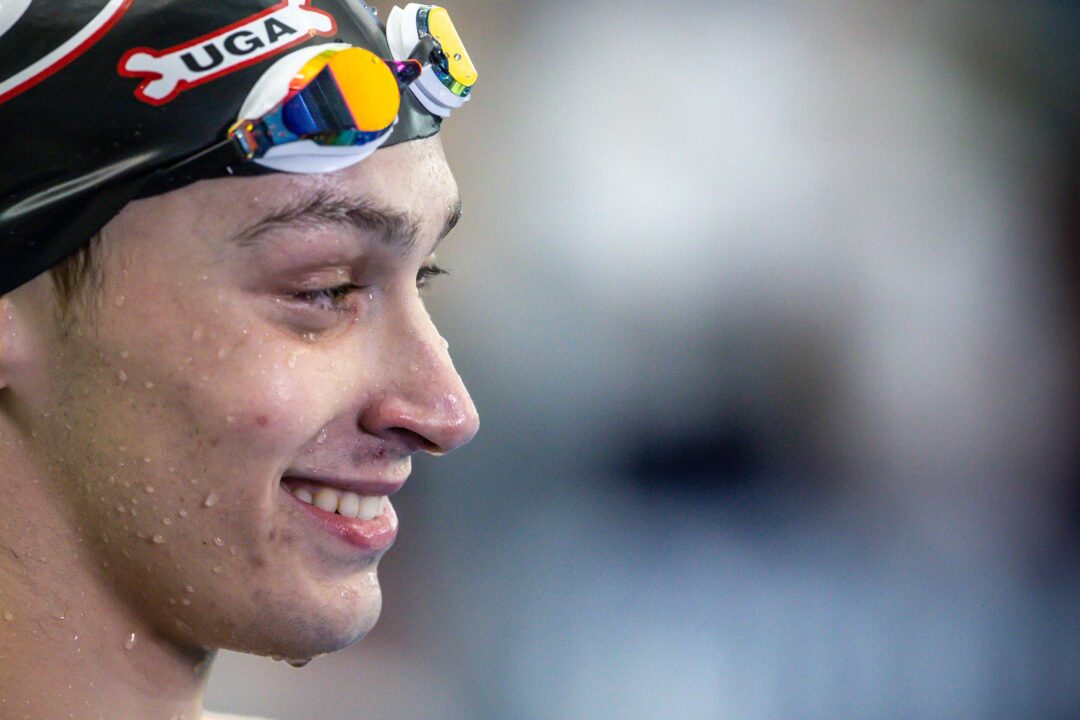 Luca Urlando will sit out the rest of the 2022-2023 NCAA season after dislocating his shoulder at the FINA World Cup in Indianapolis. Current photo via Jack Spitser/Spitser Photography

Luca Urlando, University of Georgia standout and NCAA, U.S. Open, and American Record holder in the 100 yard backstroke, will sit out the remainder of the 2022-2023 NCAA season after dislocating his shoulder for the third time following the recent FINA World Cup in Indianapolis, per an announcement on Instagram Wednesday.

At the 2022 FINA World Cup in Indianapolis, Urlando executed a cross-over turn with his right arm, though as he was being helped out of the pool by the lifeguards, Urlando seemed to favor his left arm. Urlando had been in the lead in his preliminary heat, hitting the 50-meter turn at 23.48, though did not manage to finish the third 25-meter leg of breaststroke due to his shoulder.

As many of you know,  I had a setback this last week that will need medical attention. During the 100 IM at the Indy World Cup, I dislocated my shoulder for the third time. With the support of family, friends, and coaches, I have decided to undergo shoulder surgery to prevent further dislocations and restore the anatomy. I am taking this collegiate season off, but will be documenting my rehab/progression. Grateful and appreciative for all the good wishes from everyone, and I look forward to competing full strength soon.

Urlando has a problematic history of shoulder health, going back to 2020 when he dislocated his shoulder in practice swimming with his club team DART of Sacramento, CA. At the time, Urlando, on Instagram, wrote that he “dislocated my left shoulder during a swim workout last Saturday. Recovery will take a couple of months, but with the resources available to me in Colorado Springs I am optimistic that I will be able to reach my goal of swimming well at Olympic trials.” Of course, the COVID-19 pandemic would delay the U.S. Olympic Trials until June of 2021, where Urlando would place 3rd in the 200 fly behind Zach Harting and Gunnar Bentz, and 3rd again in the 100 butterfly behind Caeleb Dressel and Tom Shields.

Though Urlando states this is his third time dislocating his shoulder, it is only the second occasion known publicly.

Urlando made his first senior international team in 2022, qualifying to represent Team USA at the World Championships in Budapest in the 200 butterfly, where he finished 5th. This announcement also likely means Urlando will miss the 2022 short course FINA World Championships, where he is slated to represent team USA in the 200 butterfly. Without Urlando, Team USA may select Trenton Julian to take his place as Julian finished the 2022 long course season with the 3rd-fastest time among American performers in the 200 fly with a 1:54.22 from U.S. International Team Trials in April. Urlando won the 200 fly at U.S. Trials with a 1:54.10, though did not finish the season as the fastest American in the event; Carson Foster, racing at Southern Sectionals in Austin in July, blasted a 1:53.67 to become the 3rd-fastest American all-time, jumping Urlando’s 2019 NAG. Foster will swim the 200 fly in Australia next month as Team USA’s top delegate in the event. If Julian is unable to go, Team USA may also select Gabriel Jett, 2022 US National Champion in the 200 fly. At US Nationals in August, Jett posted an explosive 1:54.37 to become the 7th-fastest U.S. performer all-time. USA Swimming has until November 14th to decide if they will replace Urlando with another 200 butterflyer for World Championships in Melbourne, which will take place December 13th through the 18th.

Urlando has been a standout since his teenage years, and in 2019 made noise on the international stage when he broke Michael Phelps‘ 17-18 NAG Record in the 200 LCM butterfly at the Pro Swim Series in Clovis, stopping the clock in a blistering 1:53.84, making him, at the time, the 3rd-fastest U.S. performer in history. Though Urlando has not claimed an individual NCAA title, he is the NCAA, U.S. Open, and American Record holder in the 100 yard backstroke following his remarkable lead-off leg of the 400 medley relay at the 2022 NCAA Championships at Georgia Tech, where he blasted a 43.35 to dip under Ryan Murphy‘s 43.49 record from 2016.

He’s done like dinner. What a shame, dislocations just don’t stop once they get to this level. Really wished this guy was gonna be the great American hope against Milak.

Once tipped as a serious threat to Milak – it looks more and more unlike with all his injury problems.

He was never a serious threat to Milak lol

I’m not saying that, I’m saying he was once tipped as one by the Anglo-American swimming pundits.

In Hungary his name has never come up as a contender.

Prior to the start of his shoulder injuries, anybody who didn’t view Luca Urlando as a contender wasn’t paying attention. Especially given that when he swam that 1:53.84, he was only a second away from Milak’s best time, in spite of being two years younger.

There are many talented swimmers in the US – as well as in the rest of the World – who never qualifies for the Worlds or Olympics because they don’t peek at the trials.

Urlando finished almost five seconds behind Milak this summer in Budapest, why should have been mentioned as a contender?

Nao Horomura was also 1:53 high as a junior swimmer in 2017, and where is he now? As SwimSwam editor, you should have witnessed enough cases to know that one’s time at 17 doesn’t necessarily mean anything. You are only considered a real contender after you drop threatening times at senior level. As you said, Urlando was still a second away from Milak when he swam the 1:53.8, and the gap soon widened to 3 seconds in a month. It never narrowed down since then.

It already looked pretty unlike in 2019, but It’s not the fault of him to be hyped to that extent. He’s a good swimmer who works hard and will have his own path.

it is an irony that what makes him such a great swimmer: the flexible joints also makes him susceptible to such injuries (I have no idea what I am talking about, I have zero knowledge about his swimming or anatomy in general)

With a successful surgery and proper recovery, Luca will (God willing) be on an absolute tear next season. I think it is wise to play the long game on this injury. Like the article said, he was 3rd at trials in both butterfly events. Recently, we have also seen what he can do in backstroke and the 200Im.

Really tough break, but hopefully he can come back better next season!

Such a shame to get an injury like this but we all know Luca can bounce back from this. Stay strong, the entire swimming community is rooting for you, you’ve got this!

Does anyone know the expected timeline for recovery for a surgery like this? I know with ACLs it is 10-12 months, Tommy John, about a year…

Here’s more information about these kinds of surgeries. Without knowing exactly what’s being done, hard to get a sense of timeline.

The biggest issue will be they will surgically tighten the capsule particularly reinforcing the anterior capsule (front of the shoulder) and with 3 dislocations he’s probably got a torn labrum as well. The whole point of the surgery is to tighten it and you sacrifice some “normal” end range mobility for that extra stability under normal circumstances. As a swimmer, there’s nothing “normal” about the amount of anterior laxity swimmers have and develop, especially with backstrokers and flyers. That extra mobility is advantageous (if you can control it muscularly). Rehab doesn’t usually push “normal” end ranges because the whole point is some stiffness so it will be interesting to see that goes. It’s gonna suck. I wish him the best.… Read more »

For most people, full recovery from shoulder stabilization is about 6 months. To get back to swimming, where you need more laxity and strength in your shoulders, it is closer to 1 year.

Luca, it was tough to see you hurt last week in Indy. Wishing you a solid, speedy recovery and hope you come back even stronger than before.