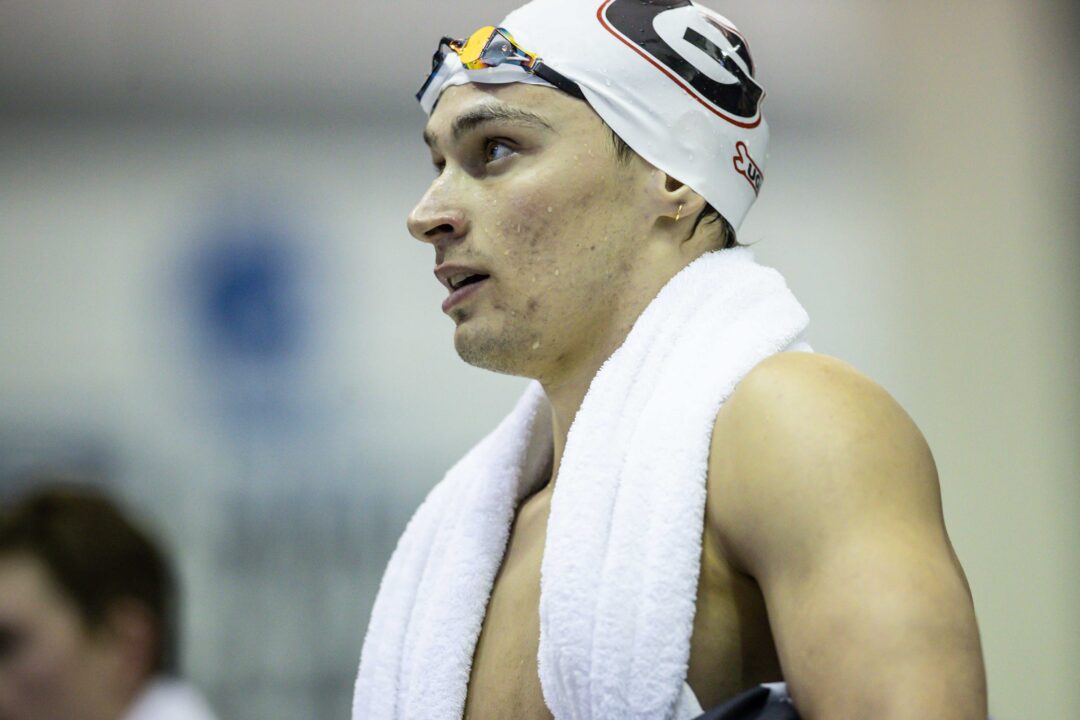 Urlando appeared to have injured his shoulder following the back-to-breast turn of the 100 IM during Day 1 of the FINA World Cup in Indianapolis. Archive photo via Jack Spitser/Spitser Photography

NCAA star Luca Urlando had to be helped out of the pool during the first preliminary session of the 2022 FINA World Cup stop in Indianapolis, appearing to injure his shoulder early in the breaststroke leg of the men’s 100 IM.

Urlando led his heat through the first 50 with a quick split of 23.48, and then executed a crossover turn using his right arm as he switched over to breast. After about a half stroke, he abruptly stopped swimming and made his way to the end of the pool where he was attended to by lifeguards.

Although Urlando used his right arm to execute the back-to-breast turn, it was the left shoulder that he appeared to be favoring as he was helped out of the pool, possibly having dislocated it.

Urlando dislocated his shoulder in January 2020 during practice, and the recovery took a few months, getting back into full butterfly training by the beginning of May.

If the injury sustained on Thursday morning is anywhere near as serious as it was two and a half years ago, Urlando will be questionable to return to full health by the time the NCAA postseason rolls around.

Currently a junior at the University of Georgia, the Bulldogs rely heavily on Urlando’s individual scoring and relay abilities. Last season he was named Men’s Swimmer of the Meet at the SEC Championships, sweeping the 100 fly, 200 fly and 200 IM to help propel Georgia to fourth in the team standings.

Following his standout NCAA campaign last season, the 20-year-old broke out on the global stage by qualifying for his first senior international team for the U.S., representing the Stars & Stripes at the 2022 World Championships in Budapest where he finished fifth in the 200 fly.

In Indianapolis, the 100 IM was Urlando’s second swim of the session, having qualified third into the final of the men’s 100 fly in a time of 50.10. Assuming he is forced to scratch, another NCAA swimmer, Virginia Tech’s Youssef Ramadan (50.93), will get bumped up into the final.

SwimSwam has reached out to the University of Georgia to get an update on Urlando’s status.

I hate this for Luca but compare this injury to a TBI suffered in many sports and I’m so glad my kids swim and not play football/hockey/soccer.

I hope he get the rehab he needs and comes back. He is so great to watch swim.

This comment section was a salient realization for me that people will argue about anything and everything.

And the true spirit of the internet would give this comment 80+% dislikes.

Dang and he was really popping off too. Hope its nothing serious

It brings me so much pain to see an elite swimmer like Luca having to be dragged out of the pool like that.
This guy really can’t ever catch a break. I wish you the best of luck, Luca. Stay strong.
#KingOfButterBack

I really really hope & pray this is not a serious matter. Just wrecks me to see that image of him being helped out of the pool. He’s a shining bright star in the sport. It’s impossible not to always root for him.

Same man. Luca is such an inspirational swimmer.

After seeing the large amount of college swimmers in the last two stops of the World Cup, I have been wondering about this. Is it a good idea for these coaches to let their swimmers compete in these SCM meets in the middle of the NCAA season? It seems to me like this makes it harder to focus and taper correctly for NCAAs in March when they are traveling around and competing in SCM meets in the middle of the season.

I thought last year that some the NCAA swimmers who went to SCM worlds struggled to hit their bests at NCAAs, and I’m surprised coaches allow this at all.

Maybe this incident will make some coaches reconsider. It would… Read more »

For Pete’s sake, competition is competition. Freak accidents happen. He can’t remain swaddled in bunting to avoid injury for the rest of his life. Could have happened in a college meet too.

Legit could’ve happened at practice, too.

It is swimming not a football game

“are swim meets hurting swimmers? this new study will shock you!”

A ton of swimmers, I believe a majority, don’t hit best times at NCAA’s.

I’ve dislocated my sternum several times and left knee once as separate incidents in practice as a masters swimmer. I had a freak accident while in college which made my sternum prone to randomly getting dislocated, but the knee was a new one.

While they sucked and were quite painful at the time, the sternum dislocations were a very quick fix and just needed to be popped back into place before I could get back in the water. The knee took me out of the water for several weeks and I couldn’t do fly or breast kick for several months once I got back in.

Never had a shoulder dislocation, but hopefully it’ll be a quick recovery for him!

This is making me hyperventilate.

What does this mean?

It means that it’s a very similar situation. Hope he recovers healthy