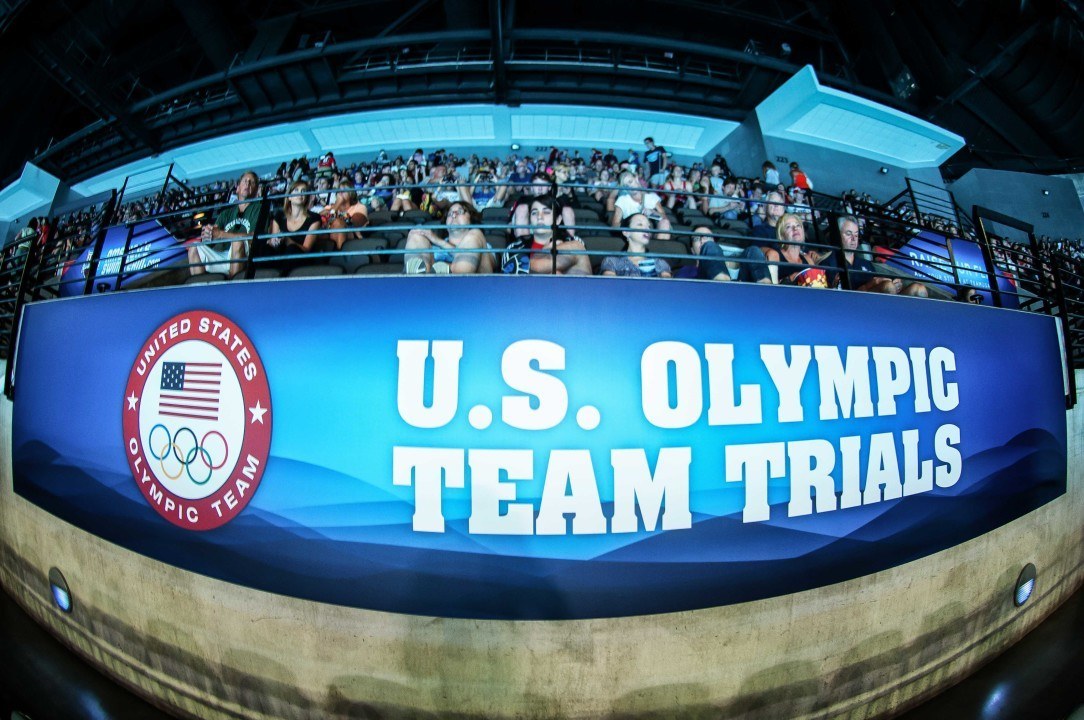 The 2020 Swim Omaha Cup has been scheduled for 3 months from now. However, as COVID-19 numbers rise in the Midwest, the fate of the Cup and Trials are... Stock photo via Mike Lewis/Ola Vista Photography

USA Swimming, in conjunction with clubs and LSCs around the country have ground the sport of swimming to a halt nationally. With USA Swimming “strongly recommending” the cancellations of all meets, most of the country’s major collegiate programs shutting down and sending swimmers home, and many of the country’s biggest clubs shutting down practices, the future of this summer’s Olympic Trials and Olympic meets are up in the air.

If the summer does proceed, however, the official test meet will be the 2020 Visit Omaha Cup. This meet, hosted by 2020 Swim Trials, LLC, will serve as a last chance Olympic Trials qualifier meet, including to those who have been affected by meet/season shutdowns. The event is scheduled to be held in the temporary Olympic Trials pool at the Chi Health Center in Omaha, giving swimmers a taste of the big stage, as well as USA Swimming the chance to test the systems in the pop-up pool.

A similar test meet in 2012 saw Kevin Cordes break a National Age Group Record in the 100 breaststroke before finishing in 3rd place at the Trials meet 2 weeks later.

According to the meet announcement, the meet entry cap is set to 400 swimmers, with Midwestern Swimming* teams given three days priority before outside teams’ registration. Since the meet is being held in the temporary Olympic Trials pool, if the Olympic Trials don’t happen, this meet probably won’t either.

*includes all of Nebraska, except the Panhandle region, and the two western-tier counties in Iowa.

As of Sunday, March 15th, nearly 2,815 people in the United States have been affected by COVID-19. In Nebraska alone, 31 positive cases have been confirmed. Iowa, bordering Nebraska to the east, has just 18 cases confirmed. Of states near Nebraska, Colorado currently has the most cases, reaching over 100 confirmed so far. The U.S. is expected to ramp up testing beginning on Monday, which should drastically increase counts around the country.

I have had this meet on the radar for over a year. I even saw it in 2016.
Hopefully all the chaos in the world is settled by then.

USA Swimming needs to put Trials on pause. We all know that athletes are 100% obsessed with focus and training to get to Trials in the first place. As every pool and training facility is shutting down, athletes are going into frenzy trying to find ways to keep their incredible investment and dreams alive..when it’s all closed. The only athletes able to still train are those with connections to private pools or cred to be allowed into one still open. So how’s that fair to the sport or fair to these incredible people who won’t let it go on their own??? When all the major Federations are cancelling their trials and WHO is telling Tokyo to shut it down and… Read more »

Well, maybe now we can all acknowledge now that of the ~2000 athletes that qualify for the Olympic Trials every year, only maybe ~200 of them (and that might be generous) have a legitimate shot at the Olympic Team.

Was this ever a secret?

Read interview with team who sets standards. They want ppl to get in who won’t make team to gain that experience so 4 years later they are ‘ready to complete’ if you will.

USA Swimming isn’t going to do anything with Trials until the IOC does something with the Olympics.

If Duke canceling school and all sports events caused the closing of the ACC Tournament, and that, in turn caused the shut down of the NCAA tourney and all NCAA Championships for the rest of the year, perhaps we should be saying, “The IOC isn’t going to do anything with the Olympics until the USOC does something about their Trials” instead. I’m not saying it’s time to cancel everything, we still have three months before Omaha. But, this Spring is a time to make decisions for greater humanity, not just follow along. I’m yet to hear angry masses cursing Duke for doing what was right.

I tend to agree that the most likely avenue to the Olympics getting moved/cancelled is major countries pulling out.

That being said…the tail wags the dog. The USOC will never pull out of anything until they get permission from NBC to do so.

Yep. Big $$$ on the line. Really sad that is the ultimate decider.

Ummm, Duke canceling school is NOT why the NCAA tournaments were shut down.

5
-7
Reply
Horns up
Reply to  USATeamMom2

at what point does this become a safe sport issue?

I’m not sure that I understand your question. This meet is 3 months from now.

Infectious disease spread is outside of the scope of SafeSport. It never becomes a SafeSport issue, because USA Swimming would simply mandate that everything be cancelled before it came to that point.