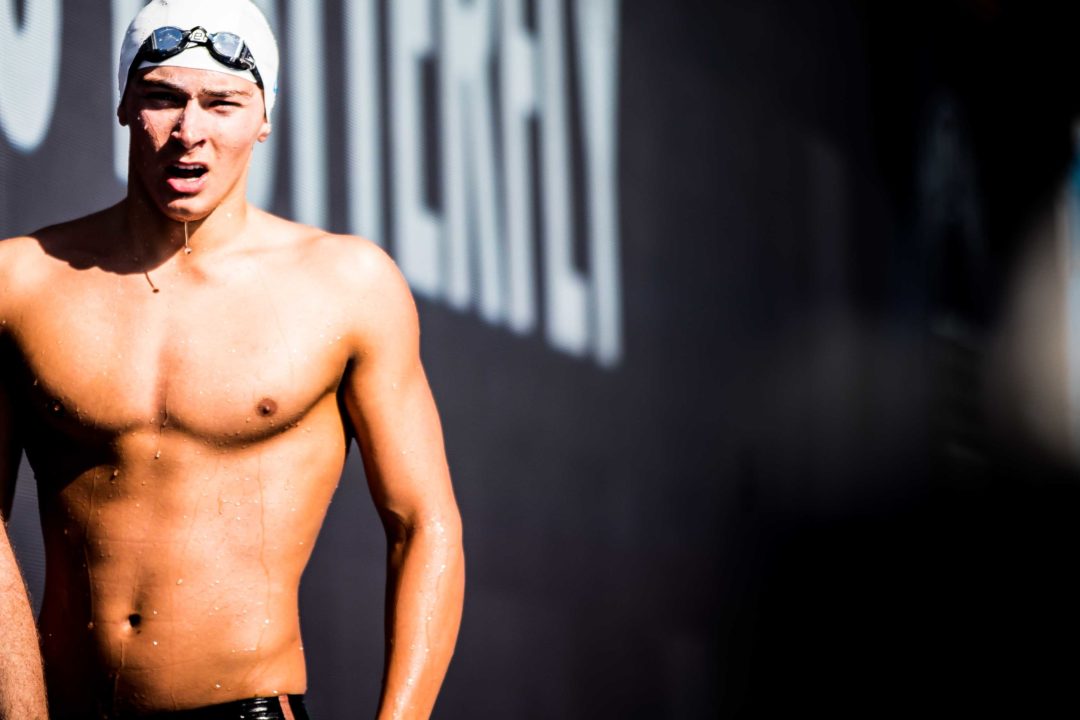 Luca Urlando swam the top time this morning in the men's 100 fly with a 45.10; within 0.07 seconds of Camden Murphy's 45.03 school record. Archive photo via Jack Spitser/Spitser Photography

The Georgia Bulldogs were back in action this morning, hosting the Georgia Tech Yellow Jackets, and the Florida State Seminoles for the second day of racing at the 2020 UGA Fall Invite. Morning swim for day 2 included prelim swims in the men’s and women’s 400 IM, 100 fly, 200 free, 100 breast, and 100 back.

Freshman Luca Urlando swam the top time this morning in the men’s 100 fly with a 45.10. The swim came within 0.07 seconds of Cambden Murphy’s 45.03 school record. Urlando improved upon his previous best in the 100 fly from 2018 which was a 45.62. Now within hundredths of a second within the school record, he sits at #2 ever from a Georgia swimmer in the event, pushing Pace Clark’s 45.66 to the third spot.

Current record holder Camden Murphy also swam the event this morning and swam a 45.25 to secure the second seed going into the finals. The two will duke it out in the final tonight, each with a shot at bettering the record. To round out the top three from the prelims, Georgia Tech’s Christian Ferraro swam a 46.31.

Bulldog Courtney Harnish swam to first place in back to back prelims, earning the top time in both the 100 butterfly and 200 freestyle. In the 100 fly, Harnish was a 52.61; just over her previous best in the event of 52.39 which she swam in February 2020 at the Bulldog Last Chance meet. Harnish followed up the 100 fly prelim win with the top time in the 200 freestyle. In that event, she was a 1:46.30. That swim was a little bit further from her best time in the event which is a 1:43.26, also from last February.

Following up from her 200 IM win yesterday, Zoie Hartman led the women’s 100 breaststroke prelims, notching a 58.72 to finish nearly a second faster than second-place finisher Danielle Della Torre’s 59.60. Hartman is the current record holder for Georgia in that event, holding a 58.21 which she swam last year as a freshman. Ashley McCauley trailed her Georgia teammates by a few seconds but made it a top 3 finish for the school with a 1:02.22.

Abruzzo was the fastest swimmer in the 500 freestyle prelim, also by  4 seconds, but ultimately fell to fourth place in the final. Abruzzo will have a shot at redemption tonight in the 400 IM final as he tries to hold off Grum, Reed, and the rest of the field.

The link to live results takes you to the UGA vs. AU dual meet results? Also, Camden’s name is misspelled in the header. Cambden. Could open him to ridicule from his fellow dawgs! LOL.

If you’re referring to the full-page ads, those aren’t supposed to be there, and we’re working with Sortable to have them stopped. Apologies for the annoyance.