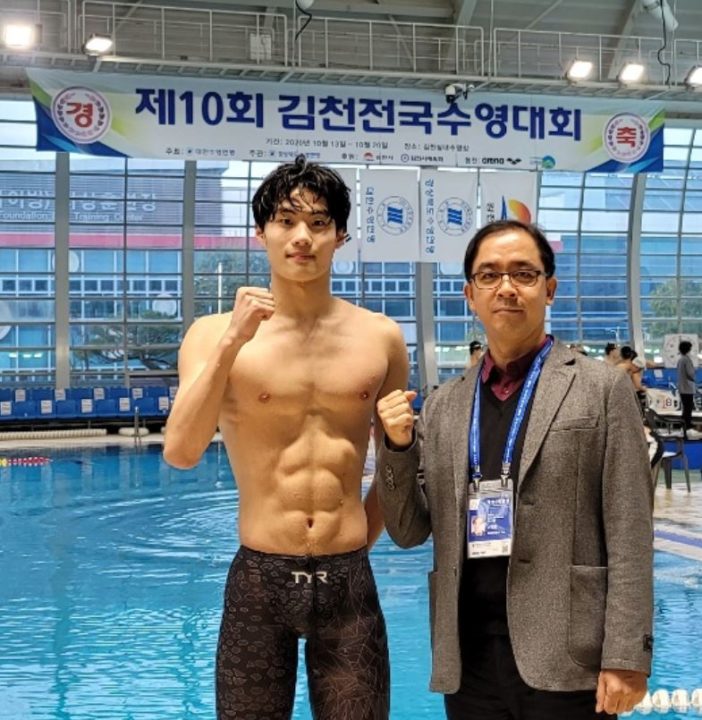 Stopping the clock in a lifetime best of 48.25, Hwang’s outing overtook the previous NR of 48.42 Olympic medalist, and most successful swimmer from the nation ever, Park Tae Hwan, put on the books back in 2014. You can read more about Hwang’s swim using the day 2 recap link above.

However, buckle your seat belts as you’re about to learn that the teen has now put the 200m free national record on notice. Busting out a monster time of 1:45.92, Hwang topped the podium by well over 2 seconds to get under the 1:46-threshold for the first time in his young career.

Opening in the first half of 51.78 and closing in 54.14, Hwang’s time tonight laid waste to his already eye-popping personal best of 1:46.31 thrown down just last month. That mark already put him among Asia’s best, ranking him as the 10th fastest man ever from the continent.

However, entering entirely new territory with his 1:45.92, Hwang sits just over a second outside Park’s national record of 1:44.80. His performance this evening rockets him up to become Asia’s 7th fastest performer all-time.

For additional perspective, Hwang’s time tonight would register as an American age mark, overtaking the Michael Phelps’ 17-18 National Age Record of 1:45.99 the GOAT put up in 2003.

Hwang’s outing would have rendered the Korean as the 8th place finisher at last year’s FINA World Aquatic Championships.

Apparently the record almost didn’t count because the meet barely got the proper accreditation in time? Sounds like something about not having proper doping inspection.. Does anyone know more about this?

Amazing swim though, glad he officially gets the record.

Remarkable swim. Why is it that non-American swimmers seem to go so fast at such a young age? Is it because they do more long course meters training than American swimmers? Or is their training more anaerobic at a younger age, resulting in faster times earlier? I ask because Australia consistently develops world class sprinters under the age of 20, and Kristin Milak holds the 200 fly WR at 19. That kind of speed as a teenager is nearly unheard of in American men. Phelps, Pierson, and Michael Andrew are all that comes to mind.

Remember that these are the best of their country that come every 5 years or so.

For S.Korea it’s been almost 15 years.

This swim is worth less FINA points than Urlando’s 200 Fly PB at the same age.

Imagine Townley with those abs.

And so the torch has been passed

Why do his abs look so angry

He is only going to get better too. A very motivated young man.

When I go to the plastic surgeon for liposuction and chest and abdominal implants I’m going to say “Doc give me the Sun-Woo!”

What about the thigh gap?

Why would a man want a tigh gap?

2
0
Reply
Fluidg
Reply to  Swimmer A