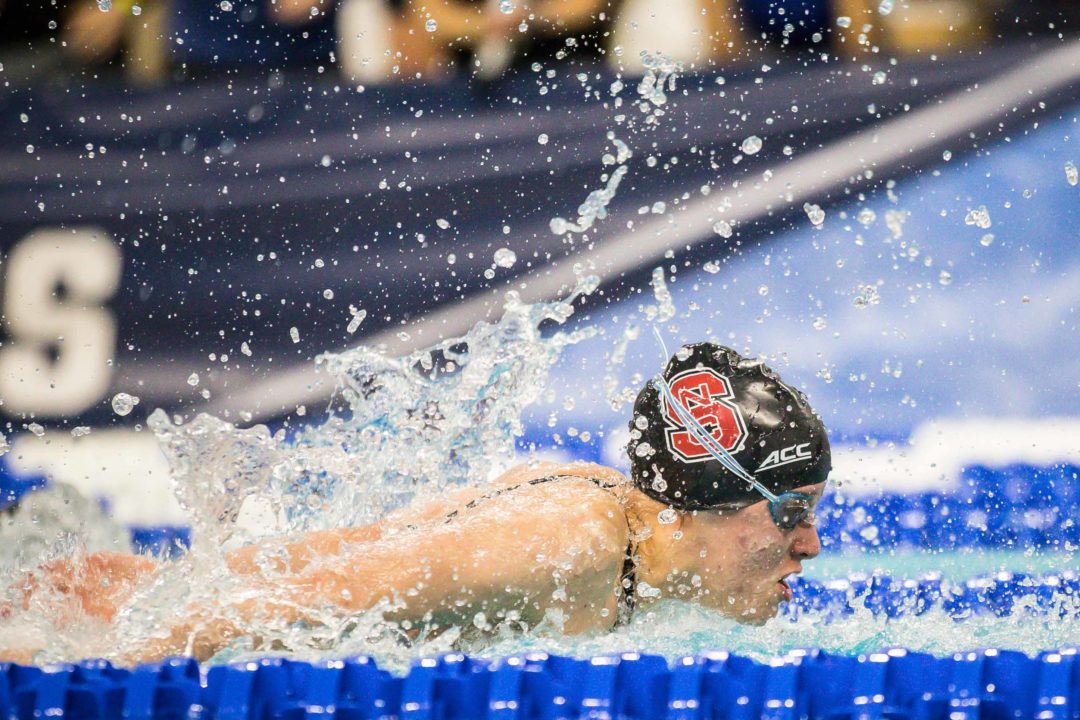 On day 1 of the Janis Hape Dowd Invite, Alons broke the NC State 100 fly record and Moore posted a faster 500 free than she swam at the 2019 DI NCAA's. Archive photo via Jack Spitser/Spitser Photography

NC State junior Kylee Alons started off the prelims session by taking 1st place in the 100 fly with a time of 51.52, breaking her own school record by .17 seconds. This time would have placed 10th at the DI NCAA Championships in 2019, just ahead of Duke’s Alyssa Marsh.

Freshman Abby Arens made it a 1-2 finish for NC State, snagging 2nd place at 52.25, ahead of University of North Carolina junior Sophie Lindner. All three women posted best times, with Arens and Lindner dropping nearly 2 seconds each. The top 6 finishers touched before the NCAA ‘B’ cut this morning, with Alons nearing the ‘A’ cut of 50.92.

Later, senior Kate Moore dominated the 500 free for NC State, touching 1st more than 7 seconds ahead of the rest of the field. She finished with a best time of 4:37.94, dropping 1.6 seconds and getting dangerously close to the NCAA ‘A’ cut 4:35.76. This is a significant time for Moore whose previous best, 4:38.47, was from prelims at the 2019 DI NCAA Championships which secured her a spot in the ‘B’ final. There, she finished 15th overall.

In 2nd place this morning was Virginia Tech senior Reka Gyorgy with an 11 second time drop, touching the wall at 4:45.26. NC State snagged another top 3 spot with freshman Yara Hierath touching 3rd at 4:47.19, sneaking under the NCAA ‘B’ cut by one-hundredth of a second. However, the Virginia Tech Hokies claim half of the 500 free ‘A’ final spots tonight, including sisters Chase Travis and Brooke Travis who placed 4th and 5th respectively.

Virginia Tech freshman Youssef Ramadan dropped 1.3 seconds in the 100 fly from his previous best, which he swam at the Duke vs VTech dual meet in November, to snag 2nd place at 46.43. NC State senior Luke Sobolewski claimed 1st place with a best time of 46.07 while his sophomore teammate Noah Henderson took 3rd place at 46.57. This time the top 9 finishers all snuck under the NCAA ‘B’ cut, with Sobolewski touching 1 second away from the ‘A’ cut.

There will be 3 freshmen in the 100 fly ‘A’ final tonight – Ramadan for the Hokies, and Henderson and Boyd Poelke for the Tar Heels. Virginia Tech junior Blake Manoff tied Poelke for 4th place, adding slightly to his best time while Poelke dropped over 1 second. Notably, Jack Saunderson of Wolfpack Elite, who was the top seed going into prelims, squeaked into the ‘A’ final in 8th place after adding 1.39 seconds.

At the end of prelims, Ramadan held his own in the 50 free against Michael Chadwick, who just finished the 2020 ISL Season with the Toronto Titans and is competing unattached. Chadwick took 1st place with a time of 19.36, but 18-year-old Ramadan was only .24 behind. NC State’s Henderson snagged 3rd place after a close race with Virginia Tech’s Thomas Hallock who placed 4th. The top 5 finishers posted NCAA ‘B’ cuts, with Chadwick being the closest to the ‘A’ cut of 18.96.

Sophomore Ross Dant mirrored Moore, winning the 500 free for NC State on the men’s side with a time of 4:14.04, within .27 of his best time. It will be a relatively tight race for 1st place in finals tonight, as NC State senior Eric Knowles took 2nd place with a time of 4:15.57, also remaining close to his best time. Their freshman teammate James Plage had a huge time drop of 13 seconds to claim 3rd place at 4:18.33. They all secured NCAA ‘B’ cuts this morning, and Knowles is less than 4 seconds away from the ‘A’ cut. NC State has 5 spots going into finals tonight.

NC State senior Julia Poole took 1st place in the 200 IM with a time of 1:56.19, adding just over 1 second to her best time. Duke freshman Sally Foley snagged 2nd place, dropping more than 3 seconds for a time of 1:57.44. Foley touched the wall a second and a half ahead of NC State junior Emma Muzzy. All 3 women were well under the NCAA ‘B’ cut in this event.

To conclude this prelims session, the NC State women kept their momentum going with another 1st place finish from senior Victoria Fonville who touched the wall with a best time of 22.35. She finished .08 ahead of her teammate Sirena Rowe who added .17 to her best time. Close behind was Virginia Tech sophomore Sarah Shackleford, placing 3rd with a best time of 22.50. The top 5 finishers secured NCAA ‘B’ cuts.

Could someone at UNC please fix the Live Results?

Junbae with another absolute masterclass in the 50 #workworks