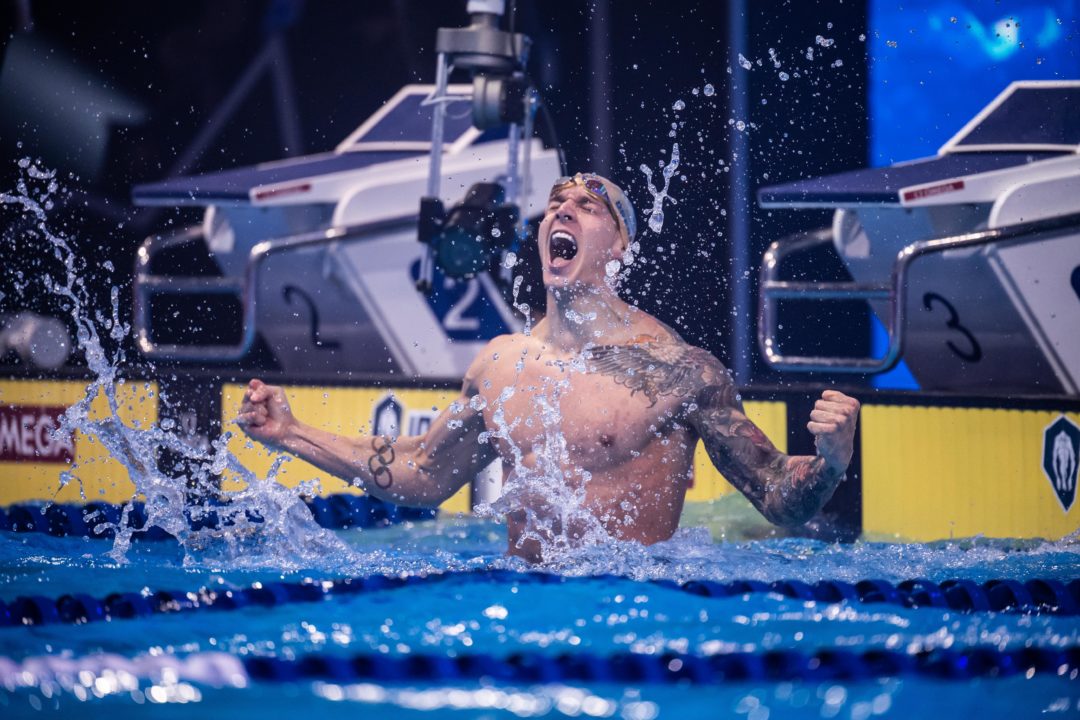 64.1% of voters picked Caeleb Dressel's 100 IM as the most impressive swim of 2020 ISL season, and Dressel's swims combined for 87.5% of the total votes. Archive photo via Mike Lewis/Ola Vista Photography

Our most recent poll asked SwimSwam readers to pick the best swim of the ISL season:

Question: What was the best swim of the ISL 2020 Season?

Nearly two-thirds of voters picked Caeleb Dressel‘s 100 IM as the most impressive world record of the 2020 ISL season, and Dressel’s swims combined for 87.5% of the total votes.

That his 100 IM bested his own 100 fly is a bit of a surprise. Typically, we see swimming fans attach more significance to records in Olympic events, with the 50s of fly/back/breast, the 100 IM, and the mixed relays often getting a bit undervalued. But Dressel’s 100 IM was especially impressive. He broke the world record twice, first going 49.88 in the semifinal match, then 49.28 six days later in the final.

Dressel remains 0.98 seconds faster than anyone else in history, showing remarkable dominance over historical ranks there.

His 100 fly wound up second in our poll, the only real challenger to his 100 IM. The 100 fly had a similar allure of smashing a second barrier (Dressel was the first under 50 in the IM and first under 48 in the fly), but was also only three tenths faster than the previous world record.

Adam Peaty‘s 100 breast wound up third, narrowly edging Dressel’s 50 free. Peaty also broke the 100 breast record twice, going 55.49 in the semifinal and 55.41 in the final. He took two tenths off the former world record, although ISL rival Ilya Shymanovich also got under the old record and is the #2 swimmer in history just .08 back from Peaty.

Below, vote in our new A3 Performance Poll, which asks voters to pick who should be ranked third in our men’s NCAA Power Ranks:

Not even surprising. I think the fact that despite the 100 IM not being an Olympic event, it is extremely competitive and exciting. Four strokes means anything can happen. So when Dressel goes a 49.88, crushing the entire field by over 2 seconds (bar his teammate), it’s just a classic Dressel swim that we’ve been hungry to see.

I think a big part of this poll was seeing exactly how much Dressel dominated and caused many to believe that the 100 IM was the most impressive. After all, he did jackpot everybody except his own teammate while in the 100 fly, he was pushed by Le Clos and Shields. Visually, the IM looked more impressive.

That was easily the most impressive swim, but I think my favorite was Kolesnikov, his second 50 was stunning.

Add to the fact that the only person remotely even in the same postcode as Kolesnikov was the much vaunted jackpot master Ryan Murphy.

Surprised that Peaty’s 100 breast ranked so high, given that Peaty, Shymanovich and Sakci were all threatening the record.

Margin over everyone else isn’t the only criteria for impressive WRs of course. Barrier breaking (e.g. MP’s 49.82) and bonkers races (e.g. 2008 Men’s 4×100 freestyle relay) all count too.

Idk I guess the fact that Peaty can go 56 in long course means that his 55.41 in SCM seem not as impressive as it should be.