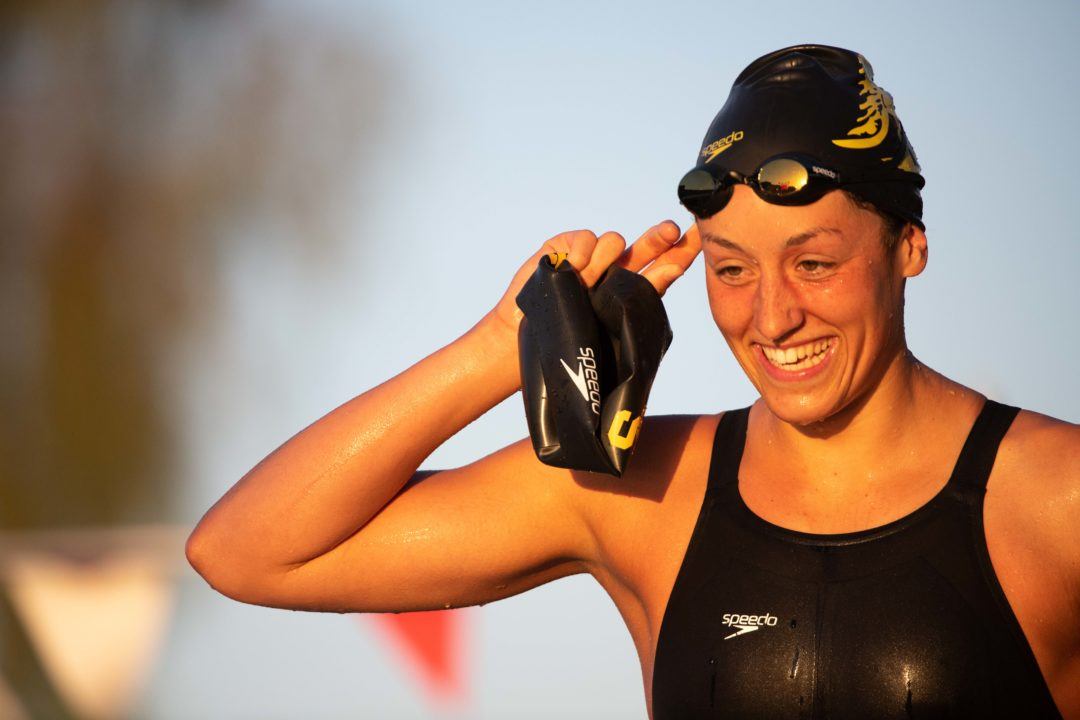 Apostalon, a 9-time NCAA All-American and the queen of swim-offs, qualified for the Czech Republic team to the European Championships this past weekend in Prague. Archive photo via Mike Lewis/Ola Vista Photography

After the completion of the Czech Swimming Championships this weekend in Prague, the federation has added 7 new names to their roster for the 2018 European Championships, bringing the team to 15 in total. The biggest new surprise on the list is former NCAA All-American Anika Apostalon, who is a native-born American that competed for San Diego State and USC.

In a college career perhaps best remembered for the crazy amount of swim-offs she took on, and won, including three in one NCAA Championship meet, in 2014. The Albuquerque native was a co-captain of USC as a senior, finished her career as a 9-time All-American, and was named the 2017 Pac-12 Woman of the Year.

After qualifying for the semi-final of the 50 free at the 2016 U.S. Olympic Trials, Apostalon has now decided to represent the Czech Republic internationally after achieving Czech citizenship a few months ago.

Besides Apostalon, Czech Republic’s 3 Olympians also earned their spots at Euros this past weekend. Jan Micka, Lucie Svecena, and Seemanova all missed the time standard at the May qualifying meet because of either health or education issues, but all 3 safely earned their spots on the team in Prague over the weekend.

Svecena was pretty-far off from her best times, but did manage to secure a qualifying time for the European Championships in the 100 fly with a 59.75.

Seemanova swam 7 individual races, plus 2 relays, in a crowded meet, which included a 55.42 in the 100 free to qualify for Euros.

Probably her best shot at making an international team. Crazy how competitive the girls sprints have come over the years. I remember when sprint was our weakest spot as a nation!

Is she still swimming at Trojan?