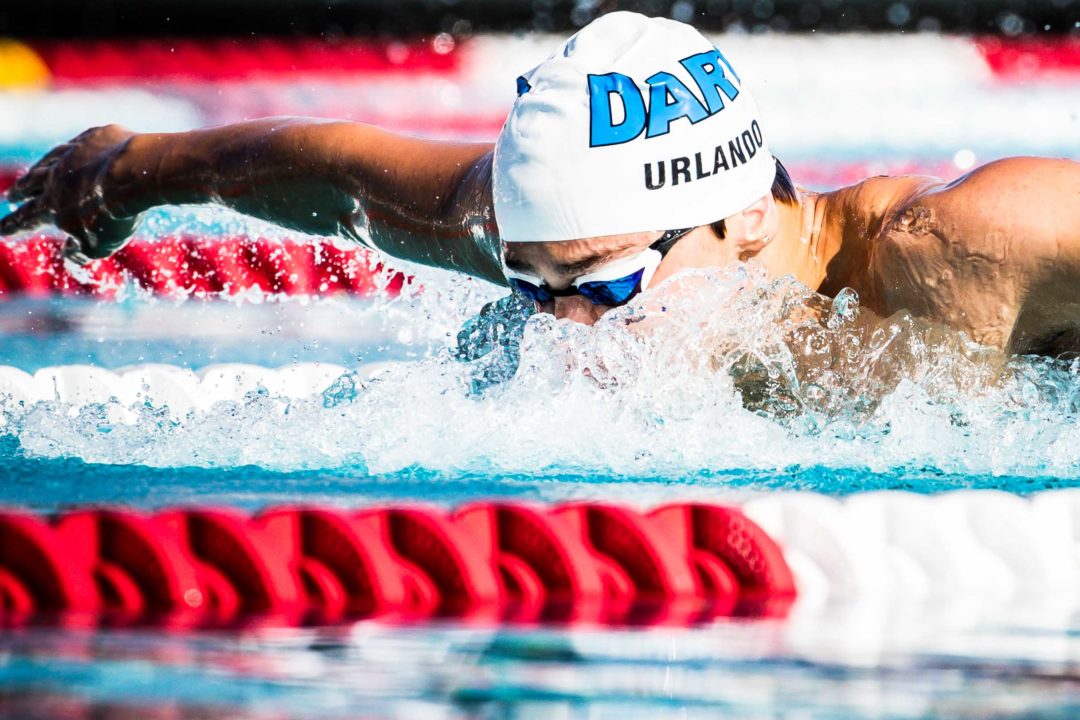 USA Swimming will use this week's U.S. Nationals to select its roster for the 2019 World Junior Championships later this summer. Archive photo via Jack Spitser/Spitser Photography

USA Swimming will use this week’s U.S. Nationals to select its roster for the 2019 World Junior Championships later this summer.

U.S. Nationals will include a bonus 18&under heat for finals in order to better make selections. The top 24 finishers in heats will make the A, B and C finals as usual, but the D final will be reserved for the next 8 qualifiers who are under 18 years old. That heat won’t necessarily have all 8 swimmers eligible for World Juniors, though, as World Juniors determine age by year of birth, and USA Swimming typically uses age on the date of the event.

USA Swimming won’t contest the 50s of fly, back and breast at Nationals, but they are contested at World Juniors. The top qualifier in the 100s of fly, back and breast will get the first priority entry in the corresponding 50. The second entry will go to the swimmer already on the World Juniors roster with the fastest time in the 50 of that stroke between January 1, 2018 and July 29 2019.

So will regan smith have a chance to swim at the jr world meet then?

Probably not, there’s more than likely some clause preventing it

She swam in Budapest World Champs in 2017 and also World Juniors the same year. So she could if she wanted to.

That’s a lot of traveling though, even for a young person

Would the SwimSwam database be able to handle it if she did?

What is the logic of using Nationals vs Juniors? Or even just using fastest times swim from say July 1-Sept 1?

Presumably the very best swimmers won’t be at Junior Nats? Seems unnecessary for someone like Urlando to turn up to Junior Nats just to beast everyone.

Agreed on Urlando. But realistically how much of the roster is made up of Urlando type swimmers?

Just takes a couple to make it not practical to use juniors. Plus the timing with World Juniors and start preparing for it. They have to learn to swim against the best and that will be Nationals

Alex is at Pan Ams

Juniors is after the meet entry deadline for World Juniors.

A team with Curzan, Smith and Urlando would be really evil. Does anyone know where i can find US age group rankings?
Edit: Just looked at the US all-time ranking in men’s 50 free for 17/18 year olds and saw 21.71 for Mark Kroening and 21.63 for Jake McIntyre from this year, are those times real?

I know this site, but i can only find all-time ranking and no rankings for this season only.

you can run it for specific competition year: https://www.usaswimming.org/times/event-rank-search

If they were real, they would be listed in the world rankings and they’re not, so it looks like an error.

Thanks, i asked because the world ranking are normally not up to date and for example often the times of german swimmers are missing.

Short course times can sometimes sneak into the rankings. They’re not.

Also Carson Foster, those 4 alone should combine for 10 golds at least.

Which 10? Actually looking at World Ranking for 2019

There are Chinese girls faster than the Walsh Sisters

Urlando is favorite by far on 200 fly, but not on 100 (Minakov is eligible for example)

I have no doubt that Smith can go faster than 2:09 high in the 200 fly and in the 100 fly i think she can go at least sub 58, not sure Shkurdai will be able to go 57 low at junior worlds after tapering for junior europeans this month
Don’t know what you mean with the Walsh sisters, i didn’t even mention them.
Minakov is the only one i see ahead of Urlando in the 100 fly and i am not sure whether he will go… Read more »

I wonder if Regan Smith will qualify….

Why not select them from last years nats, it did wonders at the world champs?

Does anyone know which of the following swimmers are eligible?

I don’t think Max Mchugh is based upon recent events

Thanks for this – here’s the link –

Regan Smith is not listed, so she’s not eligible?

Smith is eligible, age-wise. But Dalton’s tweet indicates that athletes who have already declined the team are not listed.

Who are you talking about? I am not from the US, so the only thing i know about those athletes are the times i found on the US swimming website (17/18 year old ranking -> Included guys born in 2001 and girls born in 2002), i find it quite difficult to find their date of birth, so i asked if someone (from the US, who knows those talents) could tell me whether they are eligible or not.

For the US 17-18 ranking a swimmer can be 18 years and 364 days old the day the meet starts and swim a time that qualifies them for those rankings. On the girls side you are better off looking at last years 13-14 and 15-16 rankings.

Yeah i know, but she could also be 17 years and 1 day -> Born in 2002
I think it would be nice if US swimming would add the date of birth to the list, but they probably aren’t allowed to do that. It is very difficult in my opinion to find out the date of birth for some of the athletes, often you only find their age and often that isn’t enough to tell whether someone is eligible or not.

Max McHugh was just shot in the leg, doubt he will be recovered.

You can look up their ages on the psych sheet. Not sure where you got the list but just for example, Clark Beach is 20 and not eligible for Juniors. I don’t know if there is a FINA rule regarding how an athlete’s age is determined. Example, Robert Finke swam the 1500 at Pan Pac’s last August at age 18 in 14:48 something but by FINA rule, he is not credited with the Junior World Record because he turned 19 before the end of the year.

If you look at the selection criteria, there apparently is such a rule.

Duran, Boyle and Hand aren’t entered in the meet, and so won’t be eligible.

Huge thanks! Walsh is too old? I can’t believe how fast time passes by … i still remember when Bobo was raving about her being a great young talent …

Just the way FINA does it, see World Junior Records as and example (it used to be 2 year difference).

Girls peak earlier normally … not sure this is the answer you were looking for? I think if they would allow older girls, then many would already be established at senior level and would decide not to compete and if they would limit the age on the men’s side to 17 as well, then the performances would be less “impressive” which wouldn’t be good for their “product” (at least that is how i see it).