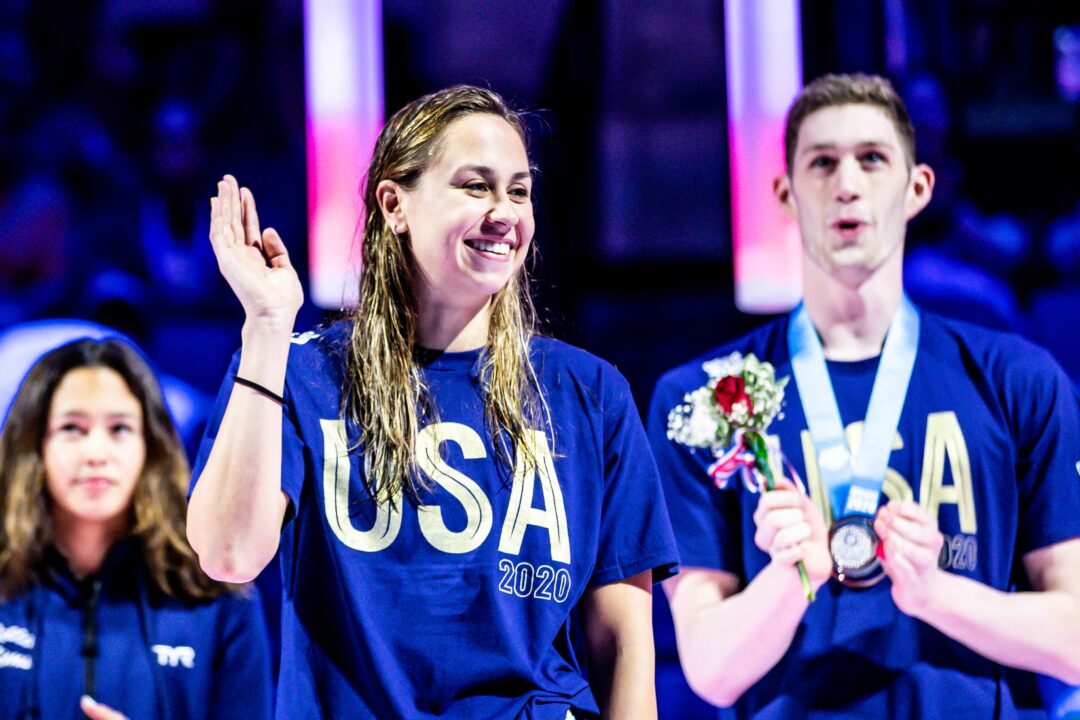 DeLoof has reset after the Tokyo Olympic Games and has moved to Loughborough to prepare for the 2024 Olympic year. Archive photo via Jack Spitser/Spitser Photography

2021 U.S. Olympian Catie DeLoof has made the move overseas to Loughborough University to train in the lead-up to the 2024 Olympic Games in Paris.

DeLoof, a 25-year-old University of Michigan grad who joined the University of Virginia pro group in August 2020, is now based out of Loughborough, England as she’s rekindled her passion for the sport after the Tokyo 2020 Olympic Games.

DeLoof was among the surprising absences from the U.S. International Team Trials last month, and we now know why as she revealed she took a lengthy break from the pool post-Tokyo before deciding on her future in the sport.

Speaking with SwimSwam’s Coleman Hodges in Loughborough, DeLoof said that she took a lengthy break after the Games, appearing in four International Swimming League matches for the Tokyo Frog Kings in September but taking three or four months out of the water shortly thereafter to hit the reset button.

DeLoof ultimately decided that if she was to continue swimming, she wanted to do so alongside boyfriend and Austrian Olympian Felix Auboeck, who joined the Loughborough training group in the summer of 2020.

The move has paid off thus far, as DeLoof has rediscovered her love for the sport.

“I feel like I’ve really found more of my passion,” DeLoof said. “I’ve always enjoyed the water and I’ve always loved swimming, but I feel like I’m doing it for myself now, and I felt like before I was doing it for coaches, or to prove it to family and friends, and that’s not really who I am.

“I feel like you can (only) get so much out of a person by doing it for others but really, in the end, you need to be doing it for yourself and to be happy and so that’s kind of why I’ve taken this next step.”

DeLoof is non-committal about when she’ll return to competition—”when I know I’ll know”—but it’s clear that the change in scenery has rejuvenated her as she sets her eyes on the Olympic Games in two years’ time.

“I feel like I have more goals now,” she said. “It was always a goal of mine to make the Olympic team, and I feel like I kind of just did it, and I wasn’t expecting it, so kind of when I was there I wasn’t able to process it as much as I could’ve, and now I feel like I have set goals that I want to achieve, set times, set things like that. So I feel like I actually have a plan in my head.”

“The goal is 2024. I think I have plenty of time to get there and I’m not concerned. I feel like two years is a good amount of time. It’s not like COVID, we had five years, four years, everything was changing and now I’m set.”

Watch the interview clip below:

In addition to Auboeck, the Loughborough University training squad boasts several other high-end swimmers including the likes of Swedish sisters Louise and Sophie Hansson.

DeLoof made the move to UVA in the summer of 2020 after previously training under David Marsh at Team Elite in San Diego.

The change paid off as DeLoof qualified for the U.S. Olympic team by finishing fifth in the women’s 100 freestyle at the U.S. Olympic Trials, clocking 53.87 after recording a lifetime best of 53.77 in the semi-finals. She went on to win a bronze medal in Tokyo as a prelim member of the U.S. women’s 400 free relay.

DeLoof also swam a personal best of 24.68 in the 50 free at those 2021 Trials in Omaha, ultimately placing seventh overall. She was also seventh in the 100 back.

During her time at Michigan, DeLoof was a nine-time CSCAA All-American and five-time Big Ten champion.

It’s amazing how she can do this. Must be nice to have parents who keep footing their bills, even at 25 yrs old. The 3 Deloof sisters graduated years ago from Michigan and none of them have gotten a full time job, choosing rather to swim. Hope it works out for her.

Sunny Cal you are so quick to judge someone’s life that you no absolutely nothing about! There are so many swimmers that struggle so much to make ends meet. From what I see on social media it looks like they are working tons of swim clinics as well as helping the Biene Wellness Building Genetics Sports Performance. Didn’t they also make a good amount of prize money through ISL? Is anything else you do besides comment negatively about swimmers and what they decide to do? Do you even know if your statements are true? Do you have a job? Seems like all you do is comment false and rude statements about swimmers on swimswam… is that your job? must be… Read more »

Funny how you can sit behind the scenes and judge people without knowing them at all. Swimming itself is a full time job. If you went to any of their profiles you would see they do more than just swim. Coaching, teaching clinics, working for health coaches, posting blogs and even sponsorships. There is definitely a form of revenue for each of those ladies, that isn’t their parents. I don’t see you making the same comments about other Olympians/professional athletes who are choosing to follow their passions because they have the opportunity and make it work? I also heard DeLoof is planning to further her education at loughborough, so another degree under her belt! What’s your degree in? Judging people?

I wonder if any female American sprinter would consider moving to Australia in the lead up to Paris. For DeLoof, the personal connection with the Loughborough training group makes sense. But for someone without a connection like that is a move around the world make sense in pursuit of the Olympic dream?

They’re doing something way better with female sprinters down there, but fewer chances at prize money, no ISL, loss of sponsor appearance fees, and the distance mean the Olympic dream has to be everything for a hypothetical person making that choice.

Why would that mean no ISL?

There’s not going to be ISL for anyone.

It wouldn’t necessarily. It’s just that 1) Australians haven’t competed much the last couple of years, and 2) if you have a relatively-short time to figure it out, probably you wouldn’t want to spend 6 months of the year abroad in Europe and not home training in Australia.