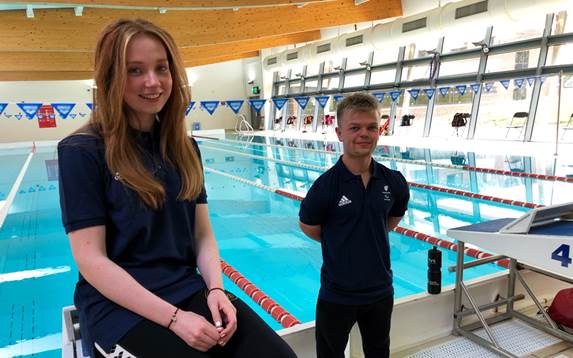 Zara Mullooly and William Perry have been added to ParalympicGB’s roster of swimmers heading to the Tokyo 2020 Paralympic Games this summer. Current photo via British Swimming

Zara Mullooly and William Perry have been added to ParalympicGB’s roster of swimmers heading to the Tokyo 2020 Paralympic Games this summer.

The inclusion of the two Northampton Swimming Club athletes takes the total number of swimmers heading to Japan up to 25, following the first selections to the squad at the end of June.

For both Mullooly and Perry, Tokyo 2020 will be their maiden Paralympic Games, with the former impressing at the London 2019 World Para Swimming Championships where she claimed silver and bronze medals, with new British records over her three freestyle events.

Perry’s first competitive international experience came at this year’s European Championships in Madeira, but having shared lane ropes with fellow Tokyo-bound athletes Maisie Summers-Newton and Eleanor Robinson in training, he is keen to test himself further on the world stage, commenting:

“Swimming alongside these incredible athletes day in, day out has definitely been a huge part of my learning. In terms of the main goals I’d initially set myself at the start of this year I’ve already far outdone them, but I’m ready to challenge myself to see what I can achieve in Tokyo.”

The nomination of both swimmers to the ParalympicsGB team had been delayed whilst Mullooly successfully completed her classification review at the Zagreb Open 2021, and Perry renewed his minimum qualification standards within the designated period set out by the IPC.

Speaking of her confirmed place on the team, Mullooly said:

“I’m so excited, it’s such an honour to have been selected for my first Paralympic Games. Obviously the last few months have been difficult waiting for my classification to be confirmed, and with competitive opportunities complicated due to COVID it has been a big challenge, so I’m really happy that everything is sorted and that I can just get my head down for the last few weeks and push on towards the Games.”

“I’m really pleased we’re now able announce the addition of both Will and Zara as part of our Tokyo 2020 selections. Zara is a key member of the team for us over multiple distances in freestyle, and will push for a place within a relay combination. She’s worked extremely hard in COVID measures and uncertainty, and it’s a real pleasure to have her confirmed as joining us for a Paralympic debut in Japan.

“As for Will, he’s progressed tremendously having focused in on his 50m Freestyle, and enables our vision of fielding a further relay quartet in competition at the Games. It’s great to have him as part of this journey to provide aspiration to lower classification swimmers coming through the ranks as to what can be achieved.”

“Congratulations to both Will and Zara, who are both fantastic additions to the ParalympicsGB team. Their hard work and resilience has paid off and I now look forward to seeing both swimmers in action in Tokyo alongside their teammates.”