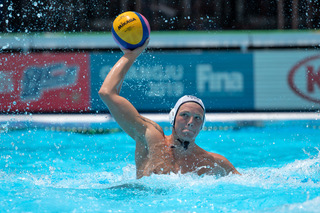 Day 1 of men's water polo at the World Championships began and ended with draws, while the middle six matches were won by a minimum of nine goals. Current photo via “Rafael/Domeyko Photography”

Day 1 of men’s water polo at the World Championships began and ended with draws, while the middle six matches were won by a minimum of nine goals (Italy 14-5) and by as many as 23 (Greece 26-3 over South Korea).

Croatia’s Ante Vukicevic was the top scorer of the day, pouring in six goals in a 14-4 win over Australia.

Serbia and Montenegro played to a 10-all draw in a back and forth affair to kick off men’s water polo action at the World Championships.

The Serbs led 6-5 at the half only to see Montenegro pull away with a 4-2 third period. In the end, Serbia came through with two goals while allowing one in the final eight minutes to draw even at game’s end.

Greece put in 14 unanswered goals in the first half, setting the table for a 26-3 shellacking of host Korea.

Donghyeok Kim was the top scorer for Korea, making two of his four shots, both on counters, while Moonsoo Kim scored the team’s third goal.

The Greeks made 60 percent of their shots (26 of 43), including four of six extra-man tries, while Korea put in just three of 25 shot attempts, including one extra-man goal.

Johnny Hooper, Ben Hallock, Hannes Daube and Alex Bowen turned in hat tricks as the USA kicked off Worlds with a 16-7 win over Kazakhstan.

The Americans scored on 62 percent of their shots (16 of 26), including 7 of 8 extra-man opportunities and all three penalty tries.

Kazakhstan made just 27 percent of its shots (7 of 26), with five extra-man goals in 10 tries, while the team led the USA in possession 17:41 to 13:55. Seven different players found the back of the net for the Kazakhs.

The Croats made 47 percent of their shots (14 of 30), with Ante Veukicevic leading the way with six goals in seven attempts. Lovre Milos chipped in two goals. Croatia hit four of five extra-player shots.

The Spaniards hit 59 percent of their shots (23 of 39), including two of three penalties and 8 of 9 extra-man opportunities.

South Africa got two goals from Nicholas Rodda and one from Jason Evezard, while scoring on just 3 of 22 shots (14 percent). The South Africans were 2 for 2 on extra player tries.

Spain led 11-2 at the half, poured in four of five goals in the third quarter and nailed on eight more scores in the final eight minutes.

Hungary kicked off the game on a 4-0 run and outscored New Zealand 20-4 over the final 24 minutes to claim the 24-4 victory.

Ten different players scored for Hungary with eight registering multi-goal efforts. Gergo Zalanki led the way with four goals, while Daniel Angyal, Krisztian Manhercz, Marton Vamos and Bence Batori turned in hat tricks. All told, Hungary hit 24 of its 41 shots, including three penalties and all eight of its extra-man tries.

New Zealand led in time of possession 18:18 to 13:42, but made just four of its 33 shots (12 percent), including 2 of 8 in extra-man opportunities. Four different players accounted for the New Zealand goals: Matthew Lewis, Ryan Pike, Matthew Small and Louis Clark.

Italy led 7-4 at the half and broke the game open with a 5-0 rally in the third quarter to pull away for a 14-5 win over Brazil.

Seven players scored for Italy, led by Stefano Luongo‘s four goal effort and Alessandro Velotto‘s hat trick. The Italians made 14 of 37 shots (38 percent), but made good on 8 of 15 extra-man tries.

Brazil saw five players score led by Gustavo Guimaraes‘ two goal effort. The Brazilians found the back of the net with 5 of their 17 shots, including the game’s lone penalty. The team was 3 of 6 in extra-man opportunities.

The Germans boasted a slim 7-5 lead at the half, but Japan outscored them 4-2 in the final 16 minutes to earn the 9-all draw to wrap up the day’s action.

Germany was the more efficient side, making 35 percent of its shot attempts (9 of 26), including a hat trick by Marko Stamm and two goals by Luuk Gielen. The Germans also capitalized on both of their penalty tries and were 5 of 11 in extra-man opportunities.

Japan made 9 of 32 shots, including one penalty, while Atsushi Arai was 3-for-3 in shot attempts and six other players managed a score. Japan was 4 for 7 in extra-man tries.