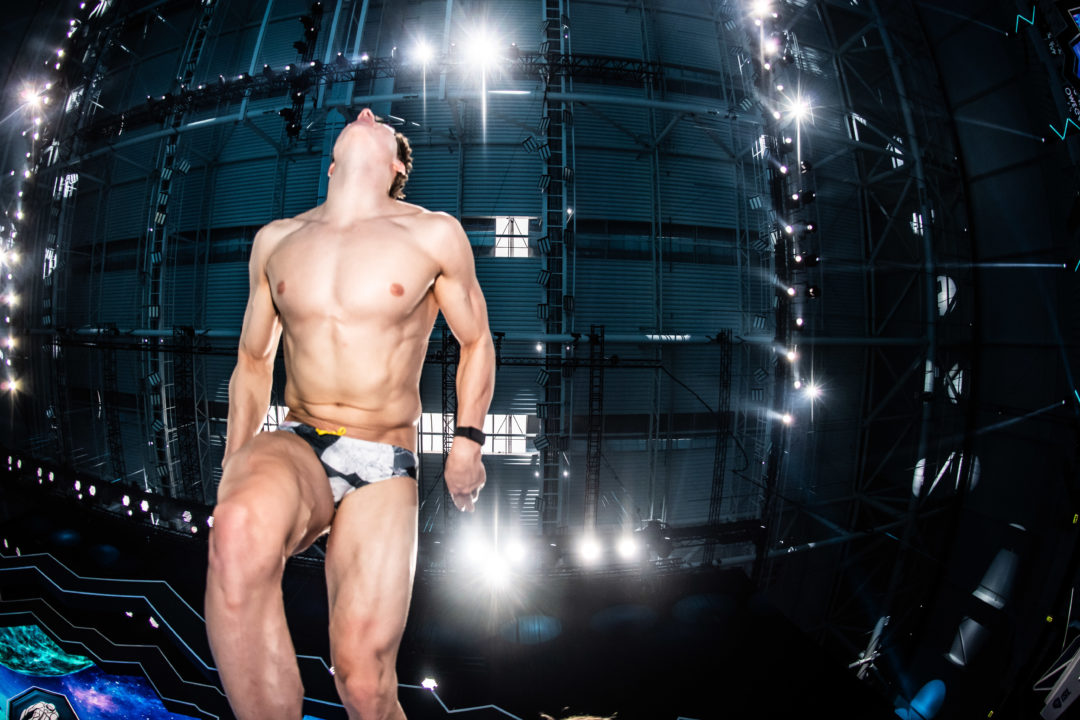 Tommy Cope says that he made the decision about backing way off his backstroke leg after the first 100 yards of the race. Archive photo via Mike Lewis/ISL

Tommy Cope has been a pleasant surprise in his ISL and professional swimming debuts this season representing the DC Trident. The Trident added him late in the signing period, after announcing their initial roster, and Cope has rewarded that confidence with several top-3 finishes this season.

In Match #5 (which was the the Trident’s third match of the season), Cope’s best finish was 3rd place in the 400 IM in 4:06.82. That was his first 400 IM of the season and he joined teammate Abrahm Devine, who was 2nd, in a strong event for DC, who ultimately placed 4th in the meet.

Overall, Cope scored 15 points in the “MVP scoring” in match 5, which ranked him 47th out of 105 total swimmers and 9th among Trident swimmers – not a bad result for a late addition. He also ranks 56th overall in the league so far this season in MVP scoring.

Long-term, if the ISL continues to grow, 56th could be enough to build a career in this league.

His 400 IM on Saturday, though, was interesting for reasons beyond just being a solid swim.

Here’s how Cope split that race:

That means he only spread his backstroke and breaststroke by 8 tenths, which is incredibly low at this level of swimming.

To put that into perspective, here is how the top 2 finishers Abrahm Devine and Kosuke Hagino:

Cope is a better breaststroker than either of the other two listed above, but for perspective, Josh Prenot of the LA Current, who is also a very good breaststroker, split is back-breast 1:05.55 – 1:08.83, more than a 3-second gap.

Cope says that while he didn’t necessarily intend to split the race that closely, he does, generally, try to line himeself up to attack the breaststroke leg.

He normally splits the event more similarly to Prenot. For example, at last year’s Big Ten Championships, where he was also 3rd, swimming 3:42.80 in yards, he split 57.82 on backstroke and 1:01.50 on breaststroke – just under a 4 second spread.

“My breaststroke has been feeling pretty good lately, so I always try to lean into it on my 400 IMs,” Cope said. “Usually I come up with a rough version of my plan during warm up and I decided to try to swim my own race, which means work the breaststroke, instead of worrying about what the other people in my heat do. Especially my teammate Abe Devine, who’s a fly and back specialist.”

Cope says he actually made the decision to split the race this extremely when he was 100 yards into the swim.

“During the race, I consciously went out conservatively on my fly, and seeing that I was in the race, I backed off of the back more than normal, which gave my breaststroke leg a big boost. I carried that momentum into my free, which helps a lot in the 400 IM.”

But, these are the kinds of things we’re seeing pop up in this incubator that is the ISL bubble, with swimmers getting the chance to race repeatedly and make rapid-adjustments in a consistently-elite environment.

“After doing it this way, I really liked the wya it felt and I think it helped me put together my best race,” Cope said. “Although it’s kind of funny that my back was so slow, I think when you’re racing against some of the best in the world, you should use your strengths to the best of your ability. If I could change one thing, I might back off a little on my second 50 breaststroke so that I can come home even faster on my free. But overall, I think this is going to be my way of doing the 400!”

Tommy. What? Backstroke! Work on it young man! You should be sub-1 min, easily. I have seen more than one of my age group swimmers go under a minute (in short course).

Big deal, I once swam faster on the BR leg than I did on FR in a 4 IM. I can still remember taking a breath and seeing my coach just throw up his hands and walk off.