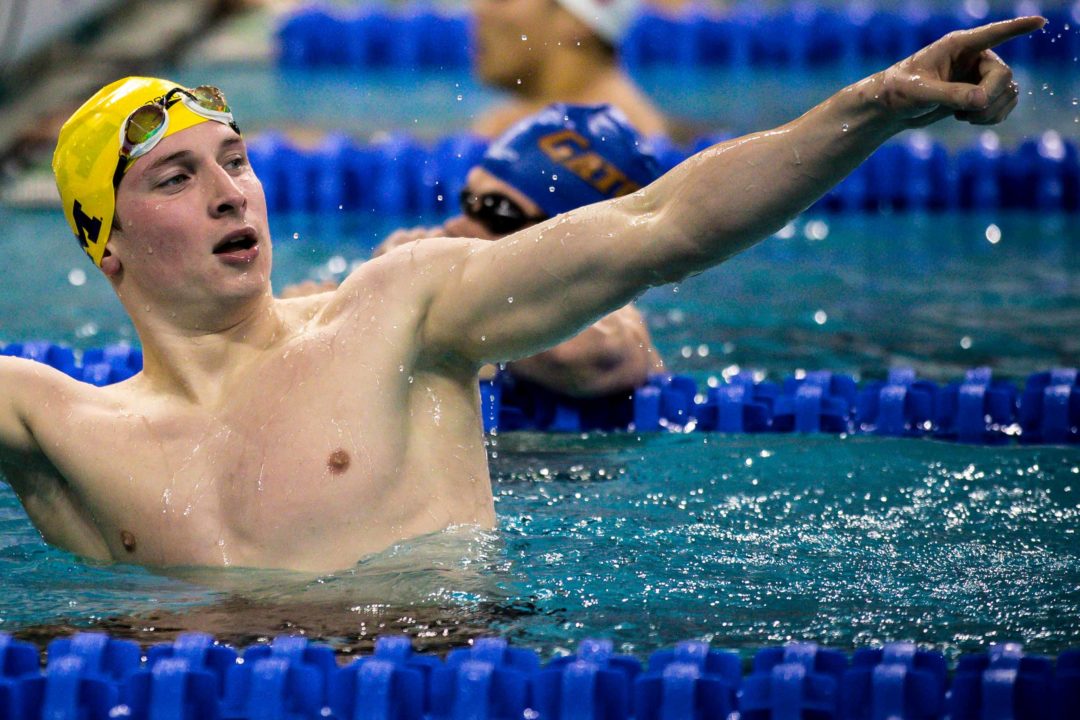 Tommy Cope, the 2020 Big Ten Conference Champion in the 200 breaststroke, will join the DC Trident of the ISL for the 2020 season. Archive photo via Jack Spitser/Spitser Photography

The DC Trident have had more changes to their 2020 ISL roster, as a tumultuous late roster run, largely driven by Australian withdrawals from the season, continues.

Pickett and Hollard were both planning on participating in the season, even after Swimming Australia blocked most of the country’s athletes from making the trip by threatening funding cuts and Code of Conduct violations.

While Pickett and Hollard were not impacted by that program, they ultimately decided that it would be too risky to travel during the uncertainty brought on by the coronavirus pandemic. Australia, which has had among the strictest lockdowns in the world, has closed its borders to most travel in and out. With reports swirling that Australians are being stranded overseas, unable to return home, the pair decided that it was ultimately better to just stay put.

One of the two spots opened by their withdrawal is going to American IM’er Tommy Cope in his first year as a pro swimmer. As a senior last season at the University of Michigan, he was the Big Ten Champion in the 200 breaststroke and as a member of Michigan’s 800 free relay. He also placed 3rd in the 200 IM and 4th in the 400 IM.

He’s not a direct replacement for Hollard, who is primarily a backstroker, but Cope’s versatility makes him a valuable pickup as rosters across the league become thinner-and-thinner as more-and-more athletes withdraw.

Ultimately, Cope’s biggest value is that he can fill just about any race on the schedule and have a chance at staving off a Jackpot (the ISL’s new rule where very fast swimmers can ‘steal points’ from slow swimmers if the margin of victory is wide enough).

Impact of Pickett and Hollard Withdrawals

Last season, both Hollard and Pickett swam for the Trident. Hollard ranked 132nd in the league in MVP scoring (without the benefit of swimming in the double-points Las Vegas finale), while Pickett ranked 193rd.

Under the ISL’s new “Aggregated Rating” system, which attempts to quantify quality of swims beyond just their team-scoring component, Hollard ranked 100th in the league last season and pickett 143rd, of around 300 participating athletes. Hollard’s rank was 5th among swimmers on DC’s initial roster this season.

The Trident still have Jacob Pebley, Mohamed Samy, and Abrahm Devine (especially in the 200) to fill out those events this season, so they’re pretty well covered for the Hollard withdrawal.

With DeVine, Drew Loy, and Samy, among others, they’re also in fairly good shape in the IM races. In short: they’ve got some versatility to fill some holes in those events, even if there’s not a ton of superstars there.

Where Cope’s addition really helps the Trident is in the 200 breaststroke. The Trident have added Conner McHugh after losing Kevin Cordes and Cody Miller this season, with Cordes joining the Condors and Miller opting out because of the pending birth of his first child.

McHugh at his best has better breaststroke times than Cope does, but those best times are all now a few years old. If there’s an area where DC really needed to add depth and options to play the ‘hot hand’ on the men’s side, it was the breaststroke races.

With Bethany Galat, Lindsey Kozelsky, and Miranda Tucker already on the roster, plus Emma Barksdale and Bailey Andison as a backup, Trident are actually well-stocked in female breaststrokers.

If they are able to add another swimmer, their biggest needs are sprint free depth for relay purposes, or maybe another backstroker to go with Amy Bilquist and Ali Galyer. At this point, though, the best strategy might be to just take the ‘best available swimmer’ still on the market and interested in competing.

The 2020 ISL regular season is scheduled to begin on October 16 in Budapest, Hungary, and run through mid-November. A later camp for the post-season rounds of the competition is being planned for late November into December, with current front-runners to host being Tokyo and Budapest.

I think the most impressive thing about Tommy is how fast he is IN SEASON. His dual meet times are consistently the best in the country. Important for ISL. Go Blue!