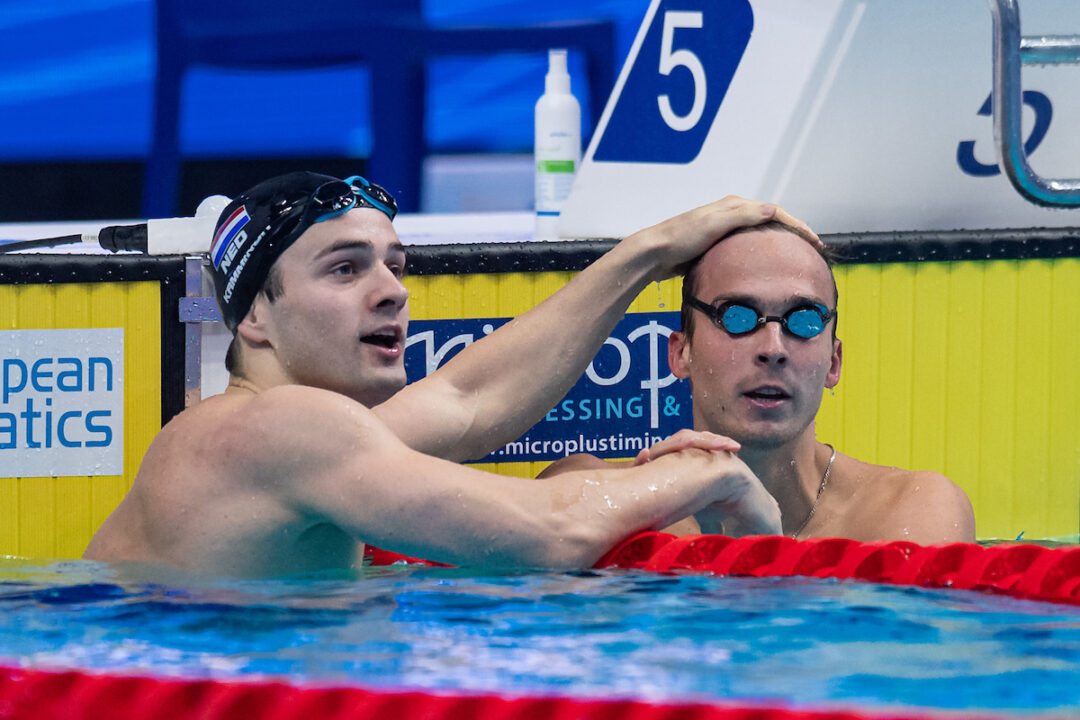 With an incredibly stacked field, a current or former world record holder may be left off the men's 200m breast Olympic podium. Archive photo via Giorgio Scala / Deepbluemedia / Insidefoto

Although reigning Olympic champion Dmitriy Balandin of Kazakhstan will indeed be in this men’s 200m breaststroke field in Tokyo, the now-26-year-old Almaty native hasn’t been among the upper echelon of talent in the event for some time.

Timewise, Balandin’s fastest performance since his Olympic gold in Rio rests at the 2:08.19 he produced in the semi-finals in Gwangju. That type of mark may not even make the final based on the types of swims we’ve been seeing in this event over the past 2 years.

As such, Balandin will have quite the fight on his hands when we examine the rest of the contenders in this men’s 200m breaststroke including the current World Record holder Anton Chupkov of Russia, Dutch breaststroking ace Arno Kamminga and young gun Shoma Sato of Japan.

First, for Chupkov, the man owns the fastest time ever produced in this dynamic event, owning a PB and WR of 2:06.12 from the 2019 FINA World Championships. He was also on the podium there in Rio, grabbing bronze behind Balandin and silver medalist Josh Prenot of the United States, who is not on the U.S. Olympic team this year.

Chupkov enters Tokyo ranked 4th in the world in 2:06.99 and with a hunger to pair Olympic gold with his world title.

Hoping to stand in his way is 25-year-old Kamminga, our pick for silver medalist already in the 100m breaststroke. Coming off of double breaststroke gold from the European Championships, Kamminga has been red-hot in this discipline, owning the #3 fastest performance in the world right now with his 2:06.85 notched in Rotterdam last December

That outing marked Kammninga’s first-ever venture under the 2:07 threshold, overtaking his previous personal best entering that meet of 2:07.18 from March of 2020.

At the 2019 FINA World Championships, Kamminga was essentially a non-factor in this event, placing 9th with a time in Gwangju of 2:08.48, then a national record. As such, in just 2 years’ time, Kamminga has thrust himself into medal contention, with his 2:06.85 PB ranking him as the 4th fastest performer in history heading into Tokyo.

The rapid progression is similar for 19-year-old Sato of Japan. The Keito University student’s best time of 2019 was marked by a 2:09.21, yet here we are in 2021 and Sato has already been in the 2:06 zone on 3 different occasions. He hit 2:06.78 in January at the Kosuke Kitajima Cup and followed that up the next month with a super quick 2:06.74 at the Japan National Championships.

When it truly counted at the nation’s Olympic Trials, Sato delivered in spades, crushing a time of 2:06.40 to register a new Asian continental and Japanese national record en route to qualifying for a home-based Games. With that effort, Sato enters Tokyo as the #2 swimmer in the world. However, his 2:06 consistency is what tilts our medal pick in his favor.

As a testament to the depth of this event, we haven’t even mentioned a pair of Australian prospects in the form of Zac Stubblety-Cook and Matt Wilson, the former of whom owns the top time in the world this season with the 2:06.28 scored at the nation’s Olympic Trials.

Stubblety-Cook’s performance brought him within .16 of Chupkov’s world record, breaking the Aussie, All Comer, Oceanic and Commonwealth records in his becoming the 2nd fastest man of all time. But his result wasn’t a fluke, with 22-year-old already having snagged a PB of 2:07.00 just weeks earlier at the Sydney Open.

Teammate Wilson was actually a once-world record holder in this event, albeit for a matter of hours. Wilson blasted a time of 2:06.67 to match the mark en route to taking the top seed out of the semi-finals at the FINA World Championships. Although he ultimately settled for silver in 2:06.68, relinquishing his WR to the aforementioned Chupkov, Wilson cemented himself into the annals of 200m breaststroke history, staking his claim on Olympic gold in Toyo.

That’s why it was such a shock to onlookers when Wilson wound up outside of Australian Swimming’s Olympic qualification time when he raced this event at their Trials last month. There in South Australia, Wilson finished 2nd to Stubblety-Cook, clocking a pedestrian-by-his-standards time of 2:08.52. That fell short of the 2:08.28 needed to automatically be considered for the Olympic team, a time Wilson had exceeded on multiple occasions.

However, Wilson was granted a reprieve by Swimming Australia after having dealt with a death in the family leading up to the Trials, As such, the man is on his way to Tokyo and will be right there in the mix of medal contenders.

Also on the list of those capable of finishing near the top is American Nic Fink, the Athens Bulldog swimmer who topped the U.S. Trials with a time there in Omaha of 2:07.55. That performance rendered Fink the 4th fastest American swimmer in history. Whether he can muster another gear and join the sub-2:07 crowd remains to be seen, however.

Brit James Wilby looks good for a potential minor medal threat with a PB of 2:07.49, although that time was posted 2 years ago. More recently at the British Olympic Trials, the Loughborough man hit a mark of 2:08.06. Yes, Wilby already had the luxury of having been named to the British Olympic roster by way of his 100m breast silver in Gwangju but a stronger argument could be made for him as being more formidable had he dropped into the 2:07-low arena at that meet.

American Andrew Wilson is another Olympic debutant but is unique in the fact he came from a Division III school. The former Emory University standout nabbed the 2nd Olympic roster spot behind Fink, posting a time of 2:08.32 at Olympic Trials. However, the 27-year-old has been as fast as 2:07.77 on the 2019 FINA World Cup circuit, which is at least where he’ll need to be to land among the top 8 of this stacked spectacle of swimming.

I see the top 4 (in no particular order) as Chupkov, Sato, Stubblety-Cook, and Kamminga.

Agreed on the order, but I think we might see more than one under 2:06, which is insane to think about!

The only certain thing is that this event is gonna be nuts.

WRs are predicted for the Olympics far more often than they occur; the nature of the heats/semis/finals format and the added pressure of the Games keep them in check somewhat. But with this event, it really would be surprising if at least one swimmer didn’t break the WR, either in semis or finals.

This guy is in an entirely different universe (namely, wikipedia. on every single article.

they should change their name to wikipedia-fina.org-usaswimmingrankings-speedorankings since their current name isn’t even accurate

Let me be off topic…as for the highly anticipated showdown btwn Ledecky and Titmus…none of them is getting under 3:56…. The winner will be a 3:57 WHY? because those guys will be exchanging the lead throughout the race and they’re gonna be tired for a 3:56 much worse a world record.. so what were you saying about Chupkov?

I think the medals will be between Chupkov, Stubblety-Cook, Sato and Kamminga. Mura and Fink should also make the final and the remaining 2 spots should be between Persson/Balandin/M. Wilson/A. Wilson/Wilby/Mattsson (and maybe Corbeu as darkhorse).