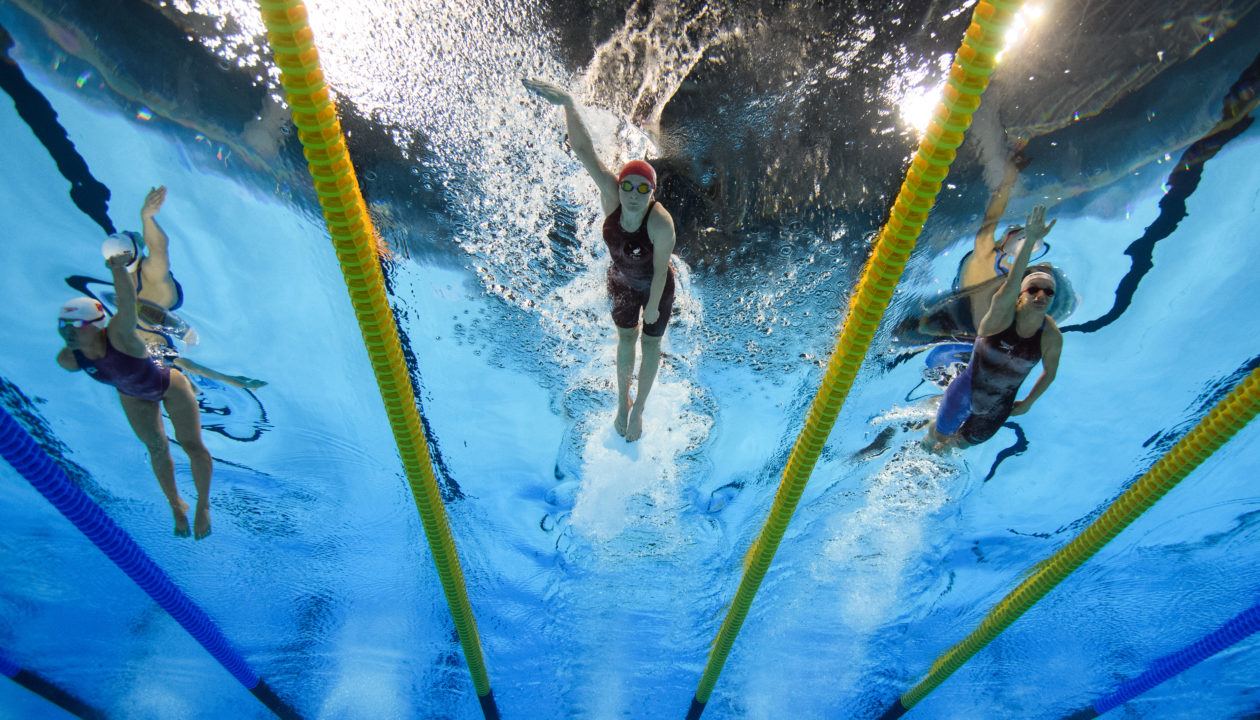 China currently leads the medal table with 25 total medals, five more than the RPC. In the S11 women's 100 back, China finished 1-2-3, led by Cai Liwen. Archive photo via Bob Martin for OIS/IOC

After four days of competition, China leads the overall medal table with 25 total medals, five more than the Russian Paralympic Committee (RPC). Both the RPC and Ukraine also have the most gold medals thus far with seven total.

Taking down her own hours-old SB6 women’s 100 breast Paralympic and European records to seal the gold medal was Great Britain’s Maisie Summers-Newton, improving from 1:33.12 in prelims to 1:32.34 in the final. China’s Liu Daomin picked up silver at 1:33.30 while USA’s Sophia Herzog earned bronze at 1:36.06.

In the S10 men’s 100 free, Ukrainian Maksym Krypak charged home to take down the 2010 World record standard of 50.87 en route Paralympic gold with a time of 50.64. Krypak also took down the 2012 Paralympic record of 51.07. Aussie Rowan Crothers, already a Paralympic champion in Tokyo, added silver to his collection at 51.37, just 0.08s ahead of bronze medalist Italian Stefano Raimondi (51.45).

In the S10 women’s class, Canada’s Aurelie Rivard upgraded her 50 free bronze to 100 free gold by breaking her own prelims World/Paralympic records at 58.14, the only swimmer to clear 1:00. Taking the silver medal in a new European record was Chantelle Zijderveld of the Netherlands at 1:00.23. Country-mate Lisa Kruger swam 1:00.68 to secure bronze for a Dutch 2-3 finish.

Clearing the 2:22-barrier for the first time in the SM4 men’s 150 IM was RPC’s Roman Zhdanov at 2:21.17. During prelims, Shdanov cruised to the top seed at 2:29.83. Israel’s Ami Omer Dadaon stopped the clock at 2:29.48 for the silver medal while Japan’s Takayuki Suzuki appeared on the Paralympic podium once again on home soil with bronze at 2:40.53. Earlier in these Games, Suzuki picked up bronze in the 50 breast while claiming a gold medal in the 100 free.

Leading off the S14 mixed 4×100 free relay were class front-runners Brazil’s Gabriel Bandeira and Great Britain’s Reece Dunn, who led off their relays with respective splits of 51.11 and 51.15. According to the World Para Swimming records database, both of those times unofficially cleared Dunn’s 2019 World record of 51.52.

At the conclusion of the relay, though, Dunn and teammates Bethany Firth, Jessica-Jane Applegate, and Jordan Catchpole combined for a new World/Paralympic time of 3:40.63. The Australian relay set a new Oceanian record of 3:46.38 for silver, the Brazilian relay wrote new Americas/South American records of 3:51.23 for bronze, while Japan’s fourth-place relay set an Asian record of 3:57.18.