The First Olympic Pool in the Maldives Is Under Construction 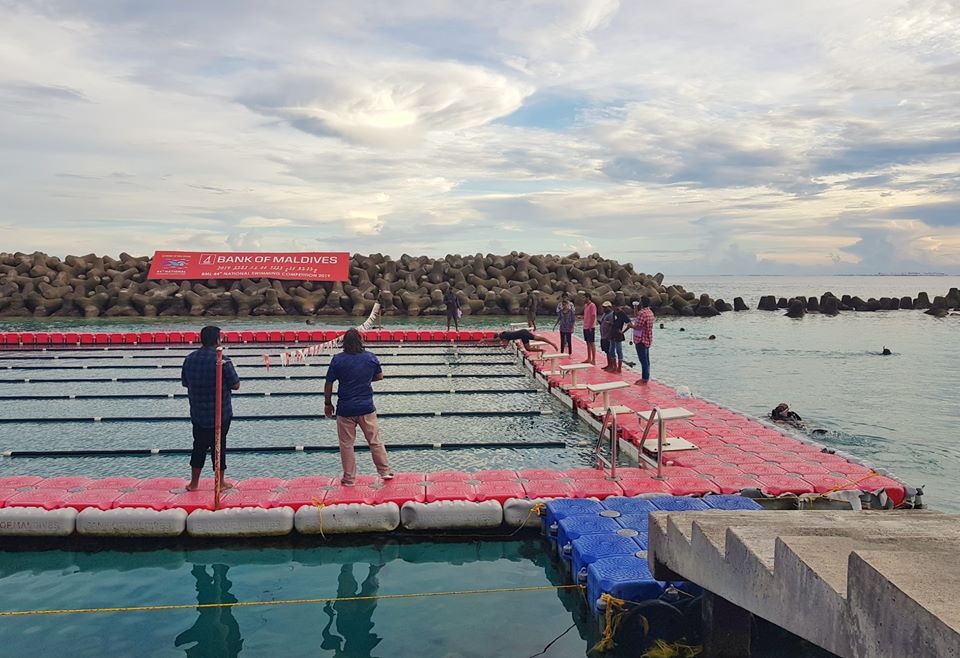 By the end of this year, Maldives will have their first Olympic-sized swimming pool in Malé. Most of the country's current training facilities are floating... Current photo via Maldives Swimming Association

The Maldives is a small but densely populated South-Indian nation comprising 1192 islands that are surrounded by the Indian Ocean. It is no surprise, with water visible from nearly every point in the country, that swimmers made up half of their 2016 Olympic team in Rio.

Those swimmers are being rewarded with the country’s first Olympic-scale 50 meter training and competition pool.

One of those swimmers, Aminath Shajan, is a 2-time Olympian, former Maldives national team member, and national record-holder in the 50, 100, 200, and 400 meter free and the 50 meter fly. At her second Olympic Games in 2016 she traveled to Rio for one event – the 100 freestyle – as a Universality selection. During the first heat of prelims on Wednesday she raced. Despite placing last in her heat, Shajan proudly set a new national record with her time of 1:05.71. At the South Asian Games in 2016 Shajan won the bronze medal in the 800 meter freestyle.

Currently, the Maldives national team trains in an indoor pool that is part of the Hulhumalé Sports Complex in Hulhumalé. This five lane, 25 meter-long pool does not meet the Olympic grade standards. These standards state that the pool must be 50 meters long, 25 meters wide (creating ten 50 meter-long lanes that are 2 to 3 meters deep.) Another main training facility in the Maldives is the Malé Swimming Track, a pool placed just behind the sea wall on the south side of their capital city of Malé that is separated from the rest of the harbor by a concrete barrier. Buoys and floating platforms construct the walls of this 25 meter pool, but they do not entirely separate the swimmers from wildlife.

In a 2016 interview with the Boston Globe, Shajan said, “We train in the sea. We train with all the trash and all the fishes and all the jellyfishes. Yeah, it’s really hard.”

She explained, “In order to improve our performances, we have to sacrifice a lot. We have to go abroad and train in different countries. For me it’s pretty easy now, but for the other swimmers in Maldives, it’s hard.”

These ‘floating tracks’ have become the standard for swimming competition in Maldives, even hosting national championship racing in them.

In parallel to the construction of a new pool, upgrades are being made to the Malé Swimming Track.

Posted by Swimming Association of Maldives on Sunday, August 2, 2020

President Ibrahim Mohamed Solih’s promise to build an Olympic-sized pool during the 2018 Maldives election can change that and greatly improve training opportunities throughout the nation. In December of 2019, a landfill in Malé was cleared out and construction for this new pool began.

The Maldives’ new Olympic-sized pool will have ten 50 meter lanes and four 25 meter lanes for warm up space. Construction in Malé is scheduled for completion in December of 2020.

Images of the construction site of the new pool are below.

I’m seeing a travel training trip in our future….

Be sure you get to the right place .Obama tried to be sassy & a say The Malvinas for The Falkland Islands but came up with The Maldives.

Cheers to them… best of luck

seeing that picture of your “floating dock pool” is a great idea in “doing what you can with what you’ve got”.