The Biggest Storylines From The Virginia vs. Florida Dual Meet 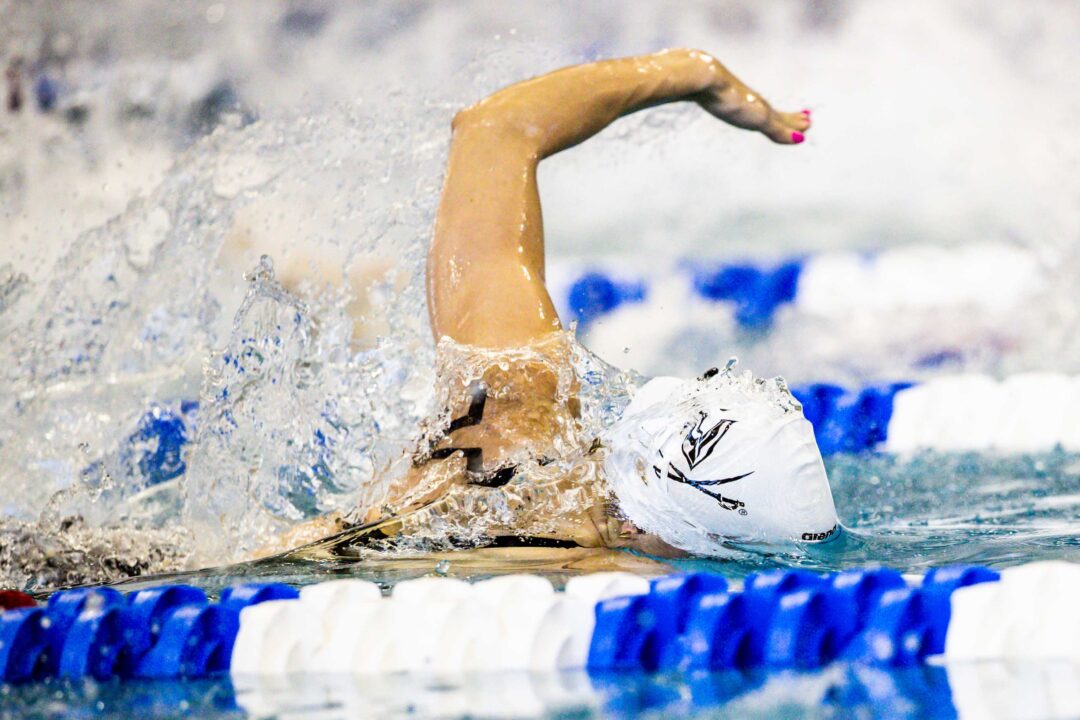 In this article, we review some of the biggest storylines that will be coming out of this weekend's dual meet between Virginia and Florida. Archive photo via Jack Spitser/Spitser Photography

On Saturday, Florida will travel to Charlottesville for a head-to-head showdown with Virginia, which is arguably one of the biggest dual meets of the year. Because of this, we decided to break down some of the biggest storylines to come from the competition.

Coming into the meet, the biggest storyline seemed to be Emma Weyant, who transferred to Florida after completing her freshman year with UVA. However, sources tell SwimSwam that she and transfer Caroline Pennington likely will not be eligible for competition this semester, so she potentially won’t be able to compete against her former teammates this weekend—although this has not been confirmed by Florida yet. However, there are still plenty of other big narratives to take a look at for the impending clash.

The Florida and Virginia men are two of the biggest sprint powerhouses in the nation. UVA broke the American record in the 200 free relay last year, but Florida came out on top at NCAAs, setting a time of 1:14.11 that was just 0.03 seconds off of Auburn’s super-suited NCAA record from 2009. At this meet, we’ll see some of the best sprinters in the nation compete against each other, which should make for some very good racing.

It may seem like Florida’s got the hot hand, since they have World Championships medalist Josh Liendo on their side. His first-ever swim in yards was a 19.69 in the 50 free, and it will be interesting to see how much more he can improve after an additional month of yards training. In addition, NCAA scorer Adam Chaney and NCAA relay champs Macguire McDuff and Eric Friese add to the team’s sprint depth. Don’t forget about Alberto Mestre, who showed some earlier season 50 free speed at Florida’s dual meet against NOVA Southeastern in September, dipping under the 20-second barrier to go 19.97.

And while Florida is headlined by Liendo, a heavy favorite to sweep the sprint events at NCAAs, Virginia is a bit different in the sense that they don’t have a standout star but instead a group of men who together make up a dangerous sprinting threat. Of course, their top two sprinters are Matt King and Matt Brownstead, giving the Cavaliers one of the best 1-2 punches in the country. However, they also have Jack Aikins, who beat King and Brownstead in the 50 free at the UVA intrasquad, as well as American record relay team members August Lamb and Connor Boyle.

You can take a look at the sprint freestyle depth charts of both Florida and Virginia down below:

Can MacNeil’s Times Go Down?

After a disappointing NCAAs last year where she failed to defend any of her 2021 titles, Maggie MacNeil is back for vengeance this season. Reunited with her old coach Rick Bishop at LSU, she ripped a 21.90 50 free, 47.43 100 free, 51.10 100 back, and 50.84 100 fly unsuited in the first month of competition, with her 100 fly time making her the first woman to break 51 seconds in a practice suit. No woman has been able to touch her times so far this season in non-intrasquad competition, but that all could change when Gretchen Walsh, and Kate Douglass make their season debut this weekend.

Like MacNeil, the two aforementioned Virginia swimmers are known for their fast, in-season unsuited, times. In addition, these two swimmers will likely be in an arms race with MacNeil for the title of “best sprinter in the NCAA” come time for championship season, so this October dual meet will stand as a test to see if they can match her fall times. Douglass and Walsh went 21.43 and 21.77 in the 50 free respectively at UVA’s intrasquad meet a few weeks ago, so it shouldn’t be difficult for either of them to beat out MacNeil’s season-best in the event. In addition, Walsh’s best dual meet time in the 100 back is 50.61, which is also substantially faster than what MacNeil went this September. However, Douglass’s fastest dual meet 100 free time from college is 48.11 while Walsh’s is 48.00, so it’s going to take a bit more work to beat out MacNeil’s 47.43 from September.

The biggest sprinting narrative is arguably whether or not Douglass can join MacNeil as the second woman under 51 seconds in an unsuited 100 fly. Douglass has been as fast as 51.30 in a dual meet before, so she just needs to drop a few tenths in order to break that barrier. SwimSwam editor-in-chief Braden Keith said on the SwimSwam breakdown last week that MacNeil’s 50.84 from two weeks ago made her a “lock” for the NCAA title, so it will be interesting to see if anyone else can challenge her early-season mark.

Due to the fact that she’s not primarily a sprinter, Virginia’s Alex Walsh isn’t a direct rival of MacNeil. However, she was picked by SwimSwam in the 2022 College Preview magazine as the #1 female swimmer in the NCAA, so she should also be someone to keep an eye out for in her season debut.

This dual meet will be a tale of two top teams in the NCAA, as well as two teams that are not yet at the top but are making their way there.

On the women’s side, Virginia has been the standard for the last two years. They are the defending NCAA team champions, hold the American record in four out of the five relays, and boast the top three individual scorers from last year’s NCAAs. Florida, on the other hand, is experiencing a fast rise to the top. Last year, in their first season under head coach Anthony Nesty, they finished 13th at NCAAs after being seeded to place 25th. They are expected to make a huge jump this season with the #3 recruiting class in the country, which includes the likes of top freshman miler Hayden Miller and All-Americans Emma Weyant and Caroline Pennington. And while the Gators are still a few years away from their peak, since 2023 recruits such as Olympian Bella Sims have yet to arrive on campus and Weyant/Pennington likely cannot compete at this meet, their matchup against Virginia is a prequel to the team battles that could come between them at NCAAs in future years.

For the men, it’s Florida that’s on top. They’ve won 10 straight consecutive SEC titles in a row, and finished third at NCAAs for the last two years—219 points ahead of the Virginia men in 2022. Virginia, on the other hand, has experienced a meteoric rise since the arrival of head coach Todd DeSorbo. They went from scoring zero points at the 2017 NCAAs and finishing 29th at the 2018 NCAAs to jumping all the way up to 10th in 2019, and have stayed within the top 10 every year since. Following the success of the women’s team, the UVA men have begun making steps of their own to the top, highlighted by an American record relay at 2022 ACCs as well as Matt King and Jack Aikins having breakout summers to get onto the U.S. National team. UVA’s sprinting depth has yet to expand towards their other event disciplines, but the momentum is there and their matchup against Florida will put them to the test against a top-ranked program that they are striving to become.

In addition to what we mentioned above, there are also plenty of other narratives to come out of this meet. One of them is the recently-announced departure of Steven Jungbluth from Florida. He had been with the Gators for 12 years as a sprint specialist, and was well-known for coaching Caeleb Dressel, the reigning Olympic champion in the men’s 50 and 100 free. Jungbluth left Florida on October 7, a few weeks after the team’s season opener against Arkansas and NOVA Southeastern on September 23, which means the meet against Virginia will be the team’s first meet since his exit.

This dual meet is important to the Virginia women not only because it’s their season opener, but also because their 2022 NCAA Championship banner will be unveiled prior to the start of competition. Following the conclusion of the meet, they will be receiving their championship rings.

The diving portion of this meet will begin Friday at 5 PM eastern time whereas swimming action starts Saturday at 10 AM. Although there appears to be no live stream of the meet, as it is not listed on ESPN’s TV Listings, SwimSwam’s Coleman Hodges will be in Charlottesville this weekend to get race video footage. In addition, swimmers from both Florida and Virginia will be featured on SwimSwam’s Instagram stories to do daily takeovers.

The live results link is available via https://virginiasports.com/sports/swimming/schedule/

Is Doug just going to swim the 200 breast?

Florida is her home, I’m sure nobody is taking it personally. I think her bf swims there but im not sure.

Will SwimSwam be doing instagram takeovers for the athletes and having Coleman travel to big “ranked” duel meets more often? Much excitement if this trend continues 🙂

will be an exciting meet for sure! ready to cheer on the hoos this season!!!

Couldn’t they still swim exhibition a la Ledecky? Wouldn’t count for points but still could get some racing in nonetheless.

Any cameos expected from Ledecky or Finke?

Unlikely since it is at UVA