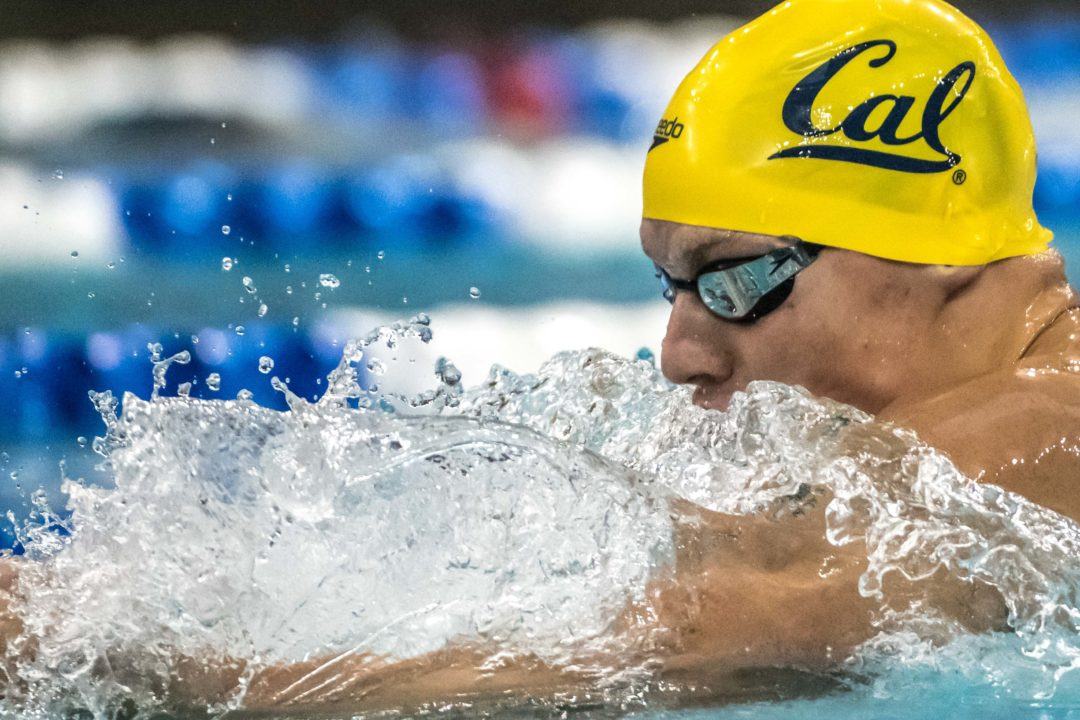 The Texas women and Cal men continue to top the CSCAA dual meet rankings in the first poll of the new calendar year. Current photo via Mike Lewis/Ola Vista Photography

The CSCAA has released its dual meet ranking polls for the first time in the new calendar year, and the Texas women and Cal men lead for the fourth straight iteration.

There wasn’t a ton of movement on the  men’s side, which isn’t surprising considering that many teams haven’t even had a meet since the last rankings. The top four teams remained exactly the same as they did were in the last poll, while Florida moved up to 5th, and NC State down to 6th. The Gators were one of the few teams with an early January meet, and impressive performances by Khader Baqlah and Robert Finke undoubtedly bolstered Florida in the eyes of the voters.

Overall, no men’s team that was ranked in December moved up or down more than two spots. Meanwhile, Virginia Tech jumped into the rankings at 21st, perhaps largely due to the fact that Antani Ivanov is now on campus and competing for the Hokies. Auburn and Harvard tied for the final spot in the poll, while Kentucky and Minnesota dropped out of the top 25.

At first glance, the women’s poll looks to be similar to the men’s in that there’s not a lot of change…at least when you look at the top four teams. Texas retains its spot for the 4th poll in a row, followed by Michigan, Stanford, and Cal, in the exact same order.

Once you get past the top four, however, there was a ton more movement than there were in the men’s rankings. UVA continued its rankings bungee jump. They were ranked 4th in the November poll, dropped to 11th in December, and now are back at 5th. That makes some sense, given the Cavaliers didn’t appear to taper to much for the UGA Invite, and they had a dominant victory over Virginia Tech a couple weekends ago.

There was also probably a strong argument to be made for Auburn moving up after a strong dual against Alabama right after the last set of rankings came out, and a keeping it relatively close against the top-ranked Texas women a couple weeks ago, although 17th to 7th is a big jump.

It’s not nearly as easy to figure out why Southern Cal and Louisville, who had been consistently ranked in the top ten, dropped as far as they did. USC moved down seven places, from 7th to 14th, while Louisville saw an even bigger drop, plummeting from 6th to 16th. The CSCAA release does specify, as always, that the poll focuses on the results of the most recent polling period, and the Trojans haven’t had a meet since November, so that may partially explain the voters’ rationale there, but we can’t come up with a good reason for the Cardinals’ downgrade, considering they beat Missouri a couple weeks ago.

Texas men & Stanford women will end up #1. I hope to see Texas women place in the top 4.. but historically they always swim fast in season then don’t show up at their best for the big show. NCAAs are in Austin this year, could be their shot!

AU men ranked 25th TOO HIGH, Laddie Vols ranked behind the UGA Bullsdogs? Not after tomorrow! UNC getting one vote??? Who dun dat??

As I have posted over the past several months, the Longhorns will, once again, win the NCAA/D1 title.
Their freshmen class is loaded and now that has been enriched with interesting transfers, well, it’s Texas all the way.
. . .And for those still pouting about “diving” in the title point totals, stop complaining and deal with the situation.
Go horns!

Can someone explain to me why IN is ranked #3? I believe that this season they have bested 5 teams in the top 10 of the current poll – including #2 Texas, #4 MI, #5 NC State, #6 FL, and # 8 Louisville. Is this poll somehow based on the potential of a team? Versus what has actually happened in head-to-head meets? Just curious

The ranking is based on how they would score in a projected NCAA format. One team’s ability to win a dual meet often differs in one’s ability to compete when there is so much depth nationwide. In short, the NCAA format favors elite talent. Texas, Cal have more elite talent than Indiana. This does not mean, however, that Indiana cannot compete for a title if the winds catch their sails.

Zach DeWitt – based on the CSCAA’s explanation of their poll, this ranking IS supposed to be based on dual meets. Whereas our Power Rankings are based primarily on NCAA placing, the CSCAA poll explicitly says that it’s supposed to be a dual meet poll.

I just don’t see Michigan as number four in the men. Where they’re strong (mid-D free, breaststroke, IM) they’re really strong, but they have some definite big holes in their relays – backstroke is the glaring one, but they’re a sprinter short of the top tier of free relays too.

I don’t know, I may be way off there. The teams below them all seem to have some holes too, besides NC State (they don’t have particularly good distance free but that’s probably the least impactful weakness to have if your sprinters can stretch to the 200, which theirs can). Florida is pretty freshman-dependent; Stanford has a sprinter/anchor hole if Mestre doesn’t swim (he’s on the roster but hasn’t logged… Read more »

FWIW, we had them 5th in our power rankings, which are much more NCAA Championship centric than are these rankings.

That’s the weird thing – I think they’re a better championship meet team than dual meet team. They put themselves in a huge hole in the medley relay, basically are giving up the first 2 or 3 places in both backstroke events, and their diving isn’t particularly good. They can move Callan, Auboeck, and Vargas around in the 200-1000 and Cope, Montague, and Swanson around in the breast/IM (not to mention Chan, but they’ve been swimming him in the sprint frees more at dual meets), but there’s still a really big drop-off between 1st and 2nd in points in dual meets.

1
0
Reply
SaintJoseph
Reply to  JP input is too short

Yea but if they put 2 in the 500 final and 1 in the 2 Best final they hosed and being hosed in Michigan is icey cold!!!

About time the H2Okies get some recognition!