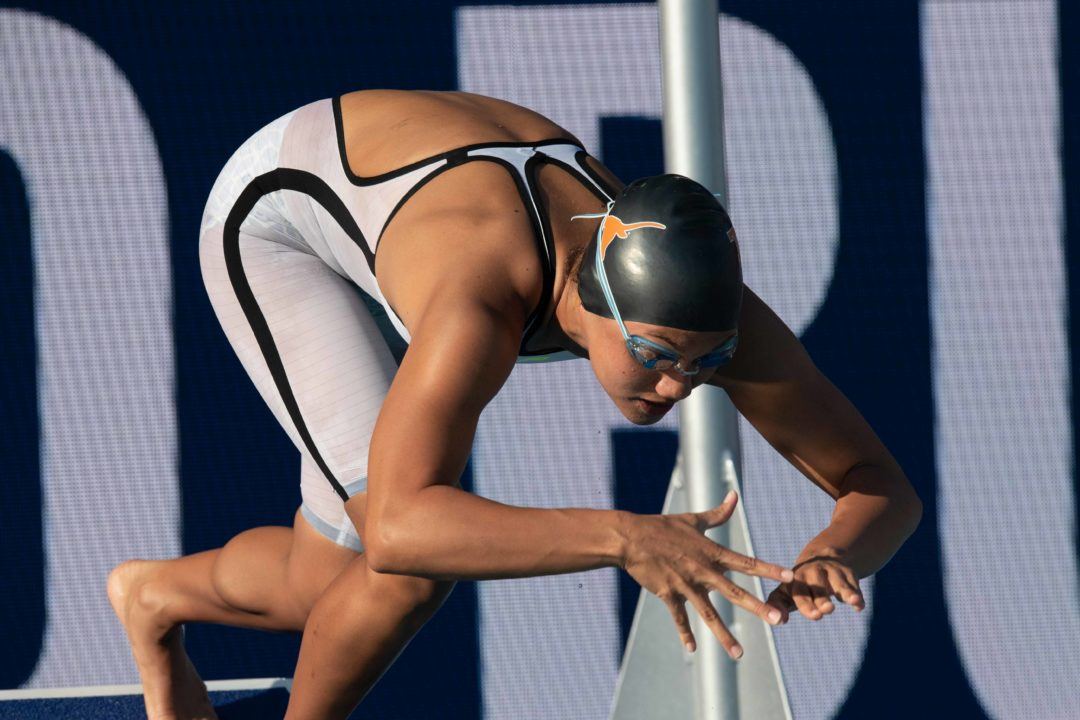 Sorry, but you do not have permission to view this content.

Besides the pre-season polls, which had the Texas men and the Stanford women at #1, the Cal men and Texas women have held strong throughout the entirety of the first season, even considering a bunch of suited mid-season invite meets that have taken place over the last few weekends.

Cal’s men recently tabulated a #1 result on the Swimulator rankings that SwimSwam put out earlier today, and had a very impressive showing at the 2018 UGA Invite. Even taking aside a heroic and omnipotent weekend from Andrew Seliskar, who stamped his spot as perhaps the best all-around swimmer in the country right now with eye-popping times in every discipline but backstroke (including an astounding range from the 50 free to the 500 free), Cal was a force in essentially every event.

Perhaps the bigger story, though, is the Texas men coming around with a phenomenal weekend of their own. They’ve moved up from #6 to #2, taking them back into the expected dogfight range that we’ve expected between Cal, Texas, and Indiana (the Hoosiers are down to #3 thanks to the Longhorns’ jump). Spurred by the absurd improvements from UT freshman Charlie Scheinfeld in the breaststrokes, who dropped from 53.60 to 51.61 in the 100 and 1:55.94 to 1:52.78 in the 200, and backed by the regular standouts and the expected strength out of another freshman, Drew Kibler, the Longhorns are proving, yet again, not to doubt their dual meet performances.

The Texas women, meanwhile, are continuing a remarkable run at the top spot. Though criticized for not being able to come to NCAAs with strong showings across the board, the talent on this team is undeniable, and their sprints, which have been bolstered immensely by standout freshmen Grace Ariola and Julia Cook (Ariola, in the flashiest yards weekend of her life, notched an ‘A’ cut in the 50 free with a rare sub-22 swim from a freshman), are on fire. With 21’s and 47’s getting left to B relays, there’s a new feel to this team.

Michigan and Stanford fall in at #2 and #3 for the women, with the Michigan women and their regular players finding perhaps the next big butterfly star in freshman Maggie Macneil. Stanford, though exhibiting plenty of strong performances, has yet to really blow the roof off of any expectations that the swimming community had for them prior to this season, what with the proven talent on their roster and the much-heralded recruiting class on their hands.

Meanwhile, among other big moves, both the men and women of Texas A&M have entered the top 10, with the men moving from #13 to #10 and the women from #11 to #8, the Arizona and Mizzou men have leaped from 25th and 24th to 13th and 17th, respectively, and the Virginia women have fallen from #4 to #11. Among new faces to the top 25, the Utah men enter at #21 after being previously unranked, while the previously unranked Arizona, Alabama, and Houston women are now ranked #21, #23, and #25, respectively.

24.8 backstroke split for Seli was eye popping to me (and it looked real smooth). I think he had great swims in all 4 strokes and many distances.

I sense some teams didn’t show their full hand. Women NC’s will be more exciting and unexpected than we think.

Easy to say and many coaches are telling themselves that on Monday!

USC has a history of underperforming at NCAAs

NCState’s men dropped to 6th? Who are these individuals voting that they feel Michigan and Florida are performing better than them?

It not a vote, or a feel. Solely based on times swum. Interesting but not a great tell for NCs due a wide variety of mitigating factors. Training, rest, competition at invites, diving points. Top 3 historically tend to be fairly accurate. After that its a crapshoot.