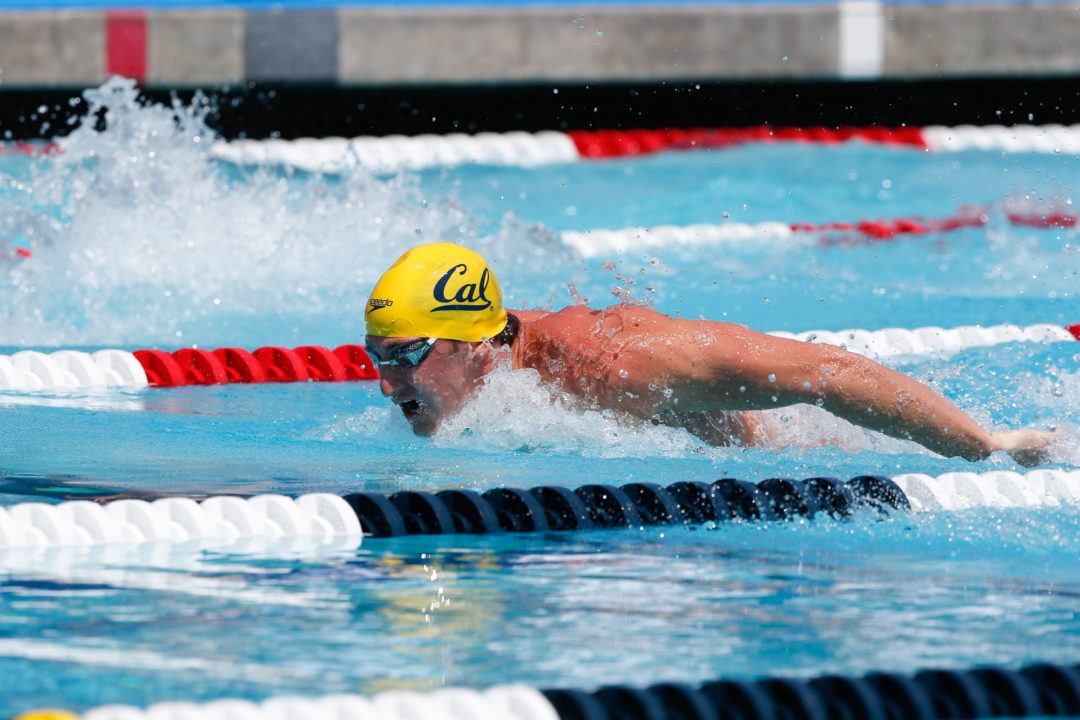 For the men, this puts Cal on top over Texas by a score of 517.5 to 442.5. Despite the advantage to Cal, this is actually a good result for Texas. At this point last year, Cal had a 112.5 point advantage over Texas. Cal went on to outscore Texas at nationals by 69.5 points in the swimming events at nationals, but Texas won the meet with on the back of their 81 diving points. None of Texas’s divers graduated. This year Cal are ahead by only 75 points. Both teams have significantly more points in the Swimulator rankings than they did at this point last year.

Texas and Cal’s improved totals may be a bad sign for Indiana and NC State, last year’s 3rd and 4th place teams. Indiana are only 34.5 points ahead of where they were at this point last year (this year: 189, last year: 154.5) when they went on to score 324 swimming points at nationals. Cal are 45 points ahead of last year, Texas are 82.5 points better.

NC State are behind their pace from last year at this point (this year: 265, last year 304). The gap to the top teams is still closeable, especially for Indiana with their diving strength, but the hill NC State and Indiana need to climb is bigger than last year.

One team that jumps off the page is Missouri at #7. Missouri are unranked in our current power rankings, so 7th is impressive. Last year at this point they had 104 points in the Swimulator rankings and ended up with only 29 at nationals, so some drop off again this year wouldn’t come as a big surprise. Still, with 185 points they have a significant head start on where they were last year.

The most dramatic drop off came from Arizona State who sit at only 72 points vs the 150 they had at this point last year. ASU lost some talent to transfers and their top returning swimmer Cameron Craig has yet to race this season.

I’ll be doing write ups on the women’s rankings and some of the conference rankings in the coming days, but if you want to see those rankings before those articles are written, feel free to run the simulation you are interested in yourself.

hmm… interesting. Obviously not a pure indicator of NCAAs, but fun and might be the best we can do at this point of the year. With that said, you know who I don’t see?? unc, auburn, Penn state, usc-e, Virgina Tech, clemson or maryland (yes those last 2 were a joke). Some of those have to be surprising, right? Sergio’s team not there, but old one is… Comfort’s team probably where they belong, Auburn national champs in the last decade, and usc-e after Bernardino moves on is not listed either….. Penn state might make sense since Shane Ryan finally graduated… or did he?

It’s crazy to see, but the cupboard was pretty bare after Apple and Gonzalez left with the new staff incoming. Taylor vs. DeSorbo comparisons seem really obvious to make, but I think Taylor is going to need a little more time to restock.

Once Sergio left you could see the end coming.

Not sure what you are implicating? The cupboard was left bare. I don’t know if it would be any different if Sergio was still there?!?

Definitely restocking for the next year or two but he’s already got a great jump on the recruiting with some fast distance to middle distance guys. Not the sprint school it use to be, obvious why Apple wanted a change.

Pretty sure Auburn beat ECU by a very large margin at the Georgia Tech Invite, not even rested very much

If Auburn is going to start using ‘beating East Carolina’ as their measuring stick, that kind of proves the point, doesn’t it?

If Indiana is +35 from last year and if they carried that over and added that to last year they would win. How does their diving look? Cal vs Texas is about what I expected…..it’s diving that will decide it unless Cal’s second tier of swimmers go nuts and start sneaking into A finals. ASU really seems down but I thought ARizona had a pretty good meet.

Great information and article! The biggest difference between CAL and Texas at this point is that Texas’ top returning performers are FAR under what they will score at NC’s while Cal’s top performers are swimming relatively MUCH faster. For example Seliskar has 60 projected points while Haas, Shebat and Katz have a combined projection of 52 points! Anyone out there think that’s close to their scoring potential at NCs? Also, Texas swam relays with at least 1 swimmer missing from each relay who is significantly faster. And Krueger (big relay contributor and potential scorer) is not in the mix due to missing the texas invite. I predict Texas will win all 5 relays.

Not a Texas fan in particular, but for the sake of discussion, I think Tate will split 44 at NC’s. Texas also has Tate, Townley, Kibler, and Krueger for the 2FRR. Cal might still have the edge, but Texas has very reasonable chances in those relays, and it will surely be competitive and a lot of fun to watch.

Shebat split an 18.7 in the 2 free relay last year. Texas has choices there.

Are you confused? What flyer are you referring to? Tate’s best time right now is 45.78. Lol

Texas did even come close to winning any relays last year, didn’t even final in one relay. Winning one would be a huge turnaround after last year’s disaster. Divers will again save the day.