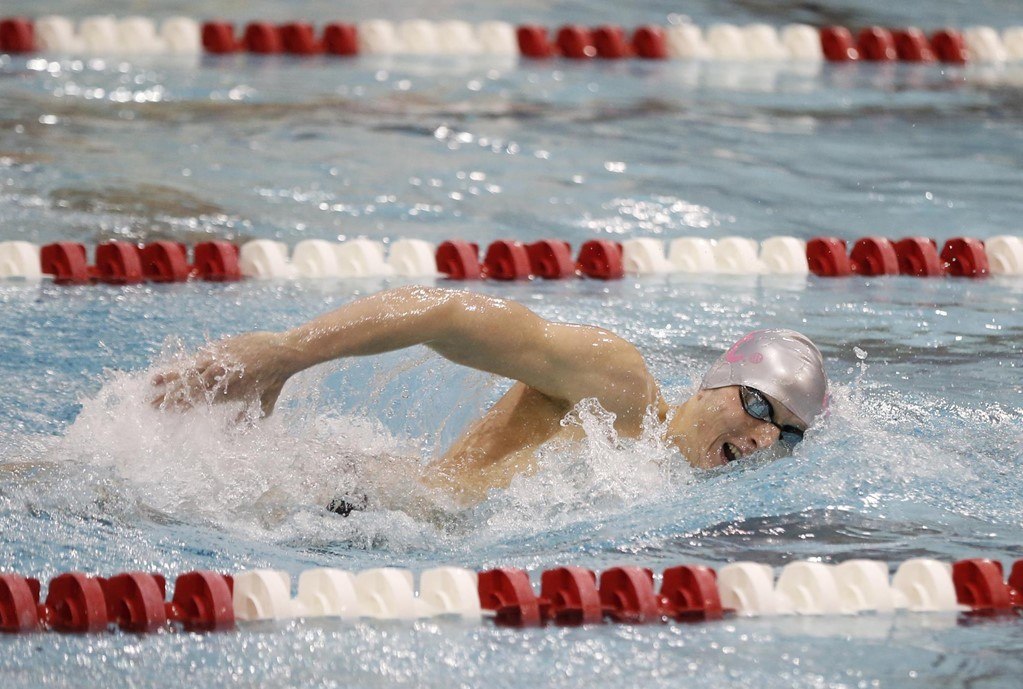 The Alabama men beat Auburn in a dual meet for the first time since the 2010-2011 season.

The Auburn Tigers and Alabama Crimson Tide split a relatively rare December dual meet, with the Alabama men edging out Auburn for their win in this series since the 2010-2011 season.

The Alabama women got things going with a victory in the 400 medley relay, outsplitting Auburn on each leg, but Auburn took over from there, winning all of the rest of the events, except two.

Justine Macfarlane was responsible for both of Alabama’s individual victories, going 1:02.60 and 2:14.98 in a breaststroke sweep.

The meet’s results dovetail nicely with the Swimulator, which had the Alabama men beating Auburn in a simulated NCAAs, SECs, and dual meet, based on best times from this season, and has the Auburn women beating Alabama in all three formats as well.

TUSCALOOSA, Ala. – The Alabama swimming and diving men beat Auburn Friday afternoon, 160-140, in the Alabama Aquatic Center. It was the Crimson Tide men’s first win over the Tigers in dual meet competition since October 2010.

The Alabama women fell to the Tigers 188-110. Senior Justine Macfarlane led the Crimson Tide with wins in both the 100 and 200 breaststroke. The Tide’s 400 medley relay of freshman Rhyan White, Macfarlane, sophomore Flora Molnarand freshman Kalia Antoniou opened the meet with a win.

The Alabama men and women return to action on January 12 against Florida State at 10 a.m. in the Alabama Aquatic Center. The Crimson Tide women also face Miami on that date in a double-dual with FSU.

TUSCALOOSA, Ala. – It was a win for the Auburn women and a narrow loss for the Auburn men as the two squads battled nationally ranked Alabama in the final fall dual meet for Auburn’s swimming and diving teams.

“Obviously there were some really, really good performances on both the women’s and men’s side,” Auburn head coach Gary Taylor said. “I’m really proud of the divers, they absolutely dominated the boards in both meets, getting some big wins and getting us off to a great start.”

Auburn won 13 out of 16 events en route to the 188-110 women’s win over the No. 23 Alabama women. Erin Falconer, Emily Hetzer, Bailey Nero, Aly Tetzloff and Alison Maillard each won two events for the 17th-ranked Auburn women.

Falconer was impressive from the beginning, leading off Auburn’s top 400 medley relay in 53.53 and then won the 100 back in 53.70 three events later. The junior also won the 200 back in 1:55.90, giving her her first sweep of the backstroke events and five total individual event wins this season. She closed out the meet by anchoring the winning 400 free relay as Aly Tetzloff, Claire Fisch and Julie Meynen teamed up with her to go 3:20.68 to win the event by almost three full seconds.

“Erin did what she has done all year, stepping up and winning events,” Taylor said.

“Emily really dominated the 1000 and then came back and dominated the 500,” Taylor said. “Those are fantastic performances by the freshman.”

“Bailey got a couple of good wins for us, taking the 200 fly and capping off the individual events with the 400 IM win,” Taylor said. “Aly had two tough individual swims and really performed well. She got out early in both the 100 fly and 100 free, holding on in the end in the 100 free, as a part of two 1-2 finishes.”

The remaining individual swimming wins went to Jessica Merritt in the 200 free (1:49.37) and Fisch in the 50 free (22.74).
Auburn’s men hung tough with the No. 18 Alabama men but came up just short, falling 160-140. Auburn claimed seven individual wins, with Josh Dannhauser earning two of them.

“Josh picked up right where he left off, getting two big wins in the distance events,” Taylor said. “He has had a fantastic season so far and he really dominated the competition today.”

“Tommy had a couple of really good individual performances, with a pair of in-season bests,” Taylor said.

“All-in-all the men performed well and showed a lot of heart and determination,” Taylor said. “They could have walked away but they kept at it. I certainly hate losing, more than I love winning, but I couldn’t be more proud of the effort I saw from the men’s team. They never backed down and had a shot to win the meet going into the last two events.”

It was a pair of 1-2 sweeps on both springboards for both the Auburn men and women, collecting a combined seven Zone Qualifying Scores in the process.

“It was a great day for us,” diving coach Jeff Shaffer said. “We wanted to get the meet off to a strong start and we ended up sweeping both boards. That was what we were looking to do – dive consistently.”

It was also back-to-back top-two finishes for Conner Pruitt and Scott Lazeroff. Pruitt won the 1-meter with a career-best 343.43 and the 3-meter with a 364.58. Lazeroff was just behind him both times, scoring a season-best 339.08 on the 1-meter and a 361.20 on the 3-meter, with all four of those scores being Zone Qualifiers.

Logan Andrews also earned his first Zone Qualifying Score of the year in finishing third on the 1-meter with a career-best 310.28. He came in fourth on the 3-meter (312.68).

“I am really proud of everyone’s effort today,” Shaffer said. “Logan competed for the first time and earned a Zone Score. I’m looking forward to giving them the opportunity to really perform academically now, finish the semester strong with finals and then get ready for our invitiational.”

Auburn’s swimmers are done with the fall portion of their schedule and will next compete on Saturday, Jan. 5, in a home dual meet against Georgia Tech.