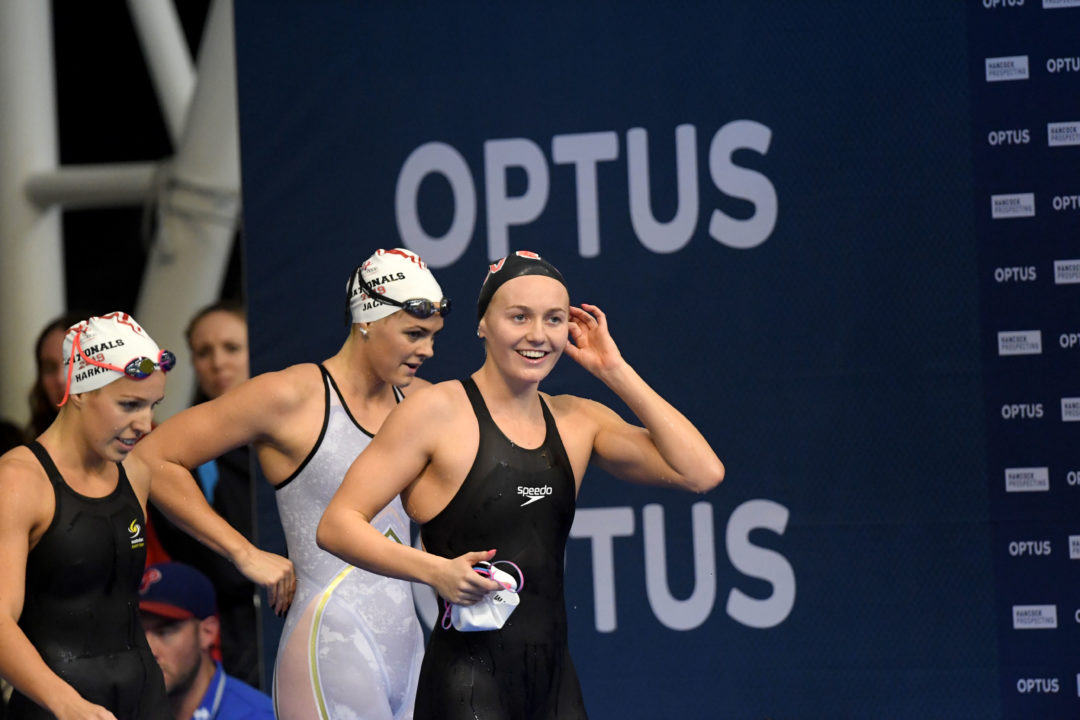 The women’s 4x200m free relay saw the Aussie foursome of Ariarne Titmus, Madi Wilson, Brianna Throssell, and Emma McKeon power their way to the top of the podium in a new World Record time of 7:41.50.

Kicking things off for the Dolphin squad was 18-year-old Titmus, the woman who already took down America’s Katie Ledecky to claim the 400m freestyle title here in Gwangju on night 1.

In this relay final, Titmus led-off the Australians in a big-time opening split of 1:54.27 to shave .03 off of her own previous personal best and Australian National Record.

Entering these Championships, Titmus held a 200m free lifetime best of 1:54.30, a time that stood as the Australian National and Commonwealth Record. The mark was set at the Australian National Championships this past April. The St. Peters Western star was already under the 1:55-threshold prior to that performance, notching a time of 1:54.85 to collect silver behind Canada’s Taylor Ruck at the 2018 Commonwealth Games.

In the individual 200m free here in Gwangju, Titmus took silver behind Italy’s Federica Pellegrini, hitting the wall in a time of 1:54.66.

Tonight, however, the first leg was all Titmus, as she maintained over a 1 1/2 second lead over the next-closest competitor, 100m freestyle Olympic Champion Simone Manuel of the United States, who split 1:56.09.

Titmus’ 1:54.27 time keeps her in the 5th slot among the world’s all-time fastest performers in the women’s 200m free event.

I’m waiting for Yozhik and his analyses of Titmus not being a 200 free ace swimmer, stemmed from irrational hatred he has for any swimmer that threatened superiority of Ledecky.

TEXAS TAP WATER should change her handle to DRINKING AUSSIE KOOLAIDE, to at least be real.

JUSTIN THOMPSON should change her handle to SALTY YOZHIK ALT, to at least be real.

Pioneers? In 200 free?
I think we have different understanding what the word pioneer mean.

I can understand Schmitt being a pioneer in 1:53, but how is Ledecky a pioneer?

So if other swimmers like Titmus and Ruck swim 1:53, you will call them pioneers as well? How many people will fit in your head definition of pioneers?

Or not? Because Titmus and Ruck had the guts to beat Ledecky?

Don’t think it will be easy, but it would be nice, it is time for Pellegrini to go, this event needs new blood.
I think many people also thought last year that Ruck would go sub 1:54 this year, but you never know.

i think we will soon see PELLEGRINI sub 1.54. has made remarkable progress and always manages to win when it really counts

PELLEGRINI for many years is not more intimidating than anyone. he defeated this problem a long time ago. his problem is to stay in shape at the right time and in budapest has succeeded and even now. maybe he figured out how to improve more and more. he could seriously win the Olympics and close his extraordinary career. (even if he lost so many times in his carrer has you rightly say)

against who should lose PELLEGRINI? TITMUS? LEDECKY? Wahhh….

Still would’ve taken 2nd to fede in the individual

Thinking like that makes no sense. It is not like people don’t influence each other in a race. She had her shot at racing against Pellegrini and lost. Maybe Pellegrini would have gone even faster if Titmus would have done that time in the 200 free final or maybe she would have panicked and would have been slower than 1:54.22 and Titmus would have won, we will never know.